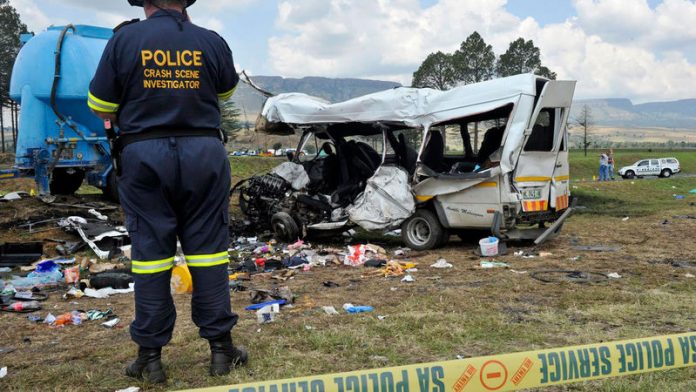 Minister of Transport Ben Martins announced on Thursday that between December 1 2012 and January 8 2013, 1 221 fatal accidents were recorded on South Africa’s roads.

After what the minister described as “a year-long programme to promote road safety in our country” it seems only a handful of deaths may potentially have been averted.

“It is estimated that approximately 1 465 people lost their lives,” he said.

Not only is the figure – which makes up just part of the over 14 000 deaths seen on South African roads annually – just 10 deaths shy of last year’s toll for the same period, it is also a preliminary one.

The figure is likely to rise further if people who are currently being treated for injuries sustained in car crashes over the holiday season fail to recover.

Although the preliminary estimates for festive season road deaths in 2011/2012 stood at 1 475, the final figure rose to 1 771 once all deaths were counted 30 days later, as per international standards for monitoring road deaths.

'Real action' necessary
In response, DA transport spokesperson Greg Krumbock said: “It is clear that the Road Traffic Management Corporation is largely ineffectual in stemming the annual tide of festive season road deaths. A major shift is therefore needed in how we approach road safety.”

The Automobile Association of South Africa (AA) said the latest numbers show a lack of cohesive direction from the various government transport associations.

“Real action to curb the road carnage is impossible when there is no cohesive strategy,” said AA spokesperson Gary Ronald.

The association blamed a lack of organisation and uniform action for the failure by the transport department and the Road Transport Management Corporation to reduce road deaths.

“The continuing division between these bodies is clearly doing more harm than good as the number of deaths on our roads has not decreased over the 2012 period,” continues Ronald. “Planning is only as good as its implementation and that we have seen little of.”

'The bloodiest festive season ever'
Howard Dembovsky, national chairperson of the Justice Project South Africa, said he believes the final tally, after the 30-day period, will be worse than last year.

“We’re heading for the bloodiest festive season ever,” he said.

Dembovsky said the reason for the high death tolls was that traffic agencies aren’t getting road safety messages out and are not enforcing the law.

“It’s as simple as that. If they start enforcing the law, as has been done in the UK, US and Australia, then they’ll start seeing results.”

“The fact is, employing your people to sit behind speed cameras in bushes or to man roadblocks is not what I would define as enforcing the law. All it is is revenue chasing. Until that changes, nothing is going to improve,” Dembovsky added.

Increase in daily death rate
Defensive driving specialist Rob Handfield-Jones said that based on preliminary figures provided by the Road Transport Management Corporation each year, the daily death rate over the holiday season increased from 20 per day in 2008 to 38 per day this year.

This is despite the fact that the holiday season is now shorter than it was five years ago.

Handfield-Jones said he believes licensing is the pivotal reason behind declining road safety in South Africa.

In 1998, the requirements for qualification as a driving instructor were made much less rigorous, he said, and this in turn led to more people failing their driving tests.

“When you have poor quality instructors, people fail. And when people keep failing … [they] say: 'nevermind this, we’ll start buying our licence,'” he said.

According to Handfield-Jones, this leads to an increase of corruption in licensing drivers but also to an explosion of poorly trained drivers on the road. Bringing down the road death rate would require the authorities to “start from scratch”, he said.

“We need to bring back the old driving instructors test. Apart from that, we need to overhaul the driving licence curriculum [and] overhaul the licensing system itself to prevent corruption process.

"It is possible, it’s just going to require a lot of thought and effort from the right people. [Then] we’re going to have to get our traffic police to enforce the offences, which have been statistically linked to fatal crashes,” he said.

The festive season: When reckless abandon may meet reckless driving

Government bodies are culpable for fatal crashes after they signed off on illegal conversions of panel vans against the advice of manufacturer Toyota.
Read more
National

The Road Traffic Management Corporation says at least 103 people have been killed in road accidents through the country over the long weekend.
Read more
National

The transport minister has corrected the number of people killed on SA's roads during the festive season, from 1 276 to 1 376.
Read more
National

SA has had 855 deaths on its roads since the start of Decembe, while Gauteng has had the largest number of motor crashes, followed by KwaZulu-Natal.
Read more
Advertising
Continue to the category
Politics