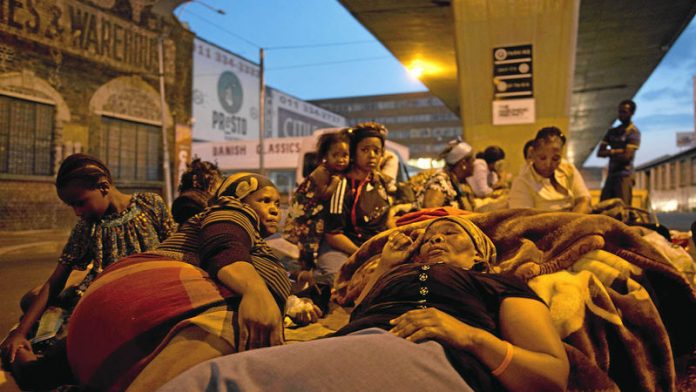 While many Johannesburgers were relaxing over the festive season, the former residents of 238 Main Street in the east of the city spent Christmas under a bridge in the trendy Maboneng precinct.

About 40 people, ranging from bright-eyed toddlers to grey-haired pensioners, became the new residents of Berea Street, under the M2's Sivewright Avenue on-ramp and adjacent to Johannesburg's fashionable Arts on Main complex, on the morning of December 19.

The victims of a building hijacking, they claim they were served with an eviction order by the infamous Red Ants and members of the South African Police Service and forcibly removed from their home, apparently without warning, an opportunity to collect their belongings or any chance to organise alternative accommodation.

"It's unfair for them to just dump us on the street. Some of us have been staying there for a long time [some since 2002] and we paid our rent," Lungisani Langa, the unofficial spokesperson of the group, said.

Wedged between two busy thoroughfares, their new home consists of little more than a few dusty mattresses, tatty bags filled with clothes, a threadbare couch and two paraffin stoves. Chalk-inscribed graffiti on one of the pillars reads: "Homeless – Hopeless."

The rest of their belongings are in their former abode, which is welded shut and boarded up. The elderly say their medication is still in the building and mothers claim their children cannot get to their schoolbooks or uniforms. Two days after Christmas, baby Kwanele Makhaye was nearly born on the street but his mother Maki was rushed to the Hillbrow health precinct.

The residents paid a monthly rent of between R400 and R650 for informal lodgings in the disused "Radiator Centre" warehouse to Mthandeni Makhaya, who claimed to be the building's owner.

Above board
According to the housing deeds, Teyengwa Masawi is the owner of the building, which he bought in August 2009.

"The eviction process has been going on since 2010 when the ownership of the building was transferred," Masawi said.

The process was above board. "Adequate notices were issued to the people staying at the building.

"What was the basis of Mr Mak­haya renting out that building without legal title?"

The Centre for Applied Legal Studies (Cals) challenged the eviction order in the South Gauteng High Court but the matter was postponed to the end of January because of "legal inconsistencies in establishing the rightful owner of the building".

Although their current situation is almost untenable, most prefer to stay near to the building to ensure that their possessions are not stolen.

"It's too expensive to stay elsewhere and we need to get our belongings out of that building. We have nothing," Gugu Buthelezi said.

Humanitarian support
The city's department of housing has refused to get involved because of the "several legal elements at play". "The city makes no commitment to addressing the matter until an assessment and analysis is conducted and concluded," it said in a statement.

Other attempts have been made to help the displaced residents. "Members of the Mabo­neng community activated their respective networks to provide humanitarian support in an attempt to improve the evictees' situation," Hayleigh Evans, spokesperson for the precinct developers, Propertuity, said.

The Charities Aid Foundation of South Africa, which is based in Arts on Main, has engaged non-governmental organisations, social workers and legal advisers to assist in finding a solution.

"So far Bishop Paul Verryn of the Central Methodist Church generously responded to a call from Maboneng and came to the eviction site on  January 9 to work on possible short- and long-term solutions," Evans said.

But this help has been interpreted as an attempt to move residents away from the multimillion-rand precinct.

"They've asked us nicely to leave and are helping us find a place, but we can't move to these places," Buthelezi said.

This view is supported by Cals. "There has not been an effort to deal with the affected community in a responsible and sustainable manner," Kathleen Hardy, the Cals attorney handling the case, said.

But Evans said: "If anything, this event reminds everyone of the housing crisis in the country and can hopefully help to make the public aware of the problem that exists not only in the inner city but also all over greater Johannesburg."