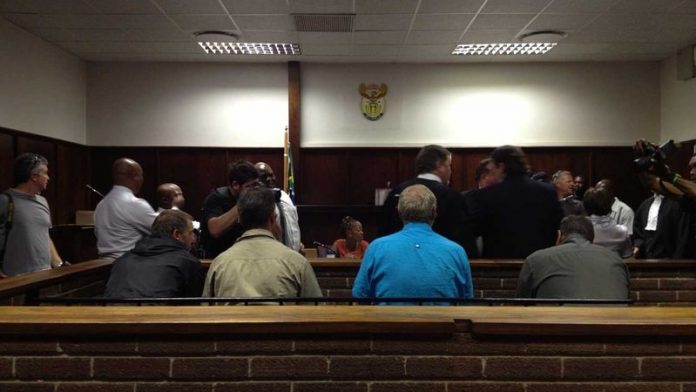 In the Bloemfontein Magistrate's Court this week the police allege to have evidence in the form of photographs of one of the suspects at the Mangaung venue, as well as a note written by one of the accused, Martin Keevy, containing the exact geographical coordinates of the University of the Free State – where the conference took place.

Allegedly, on December 16, mortars would be fired from Keevy's nearby plot in the direction of the conference venue, while battalions of right wingers would keep the attendees inside and take over the nearby military base. About 3 000 people would then travel from Prieska in the Northern Cape to Bloemfontein to join in the revolution, and consummate the Boer nation's victory over the ANC.

The "attack" would take place at noon on December 16, commemorating the Battle of Blood River, and the fulfillment of a prophesy which promises the Boer nation sovereignty in South Africa.

But by December 15, one day before the alleged terrorist attack was scheduled to take place, the four men accused of the plot had not acquired the bombs and machine guns they allegedly planned to use.

This is despite allegations made by police that financing for the weapons was in place.

The arrests
Court papers filed in Bloemfontein this week reveal that for the purposes of the bail hearing only the basic details have been presented. In an affidavit filed by investigating officer, Captain Francois Laux, he states: "The roles of the accused and other identified suspects have not been fully set out herein and some suspects' names and roles have deliberately not been mentioned herein."

It is also clear that Keevy was the only suspect physically based in Bloemfontein on the day the assassinations and subsequent revolution allegedly would have taken place. His co-accused were arrested in or near Douglas, Springs and Centurion.

Keevy, Mark Trollip, Johan Prinsloo and Hein Boonzaaier will appear in court on Friday in an effort to secure bail. The state, represented by prosecutor, advocate Shaun Abrahams, is opposing the application.

Laux's statement confirms speculation that Trollip has made a confession to the police and says that Keevy took photographs of the dining hall where the senior ANC leaders would eat on the day they would allegedly be executed.

Alleged bombing plot
Laux alleges that a meeting took place in Ficksburg, between Trollip and Prinsloo, where other "recces" present were instructed to attack the ANC's conference with bombs. The potential use of a cannon was allegedly also mentioned.

A string of emails and Facebook postings are included as evidence in the case against the four, in which the accused, and other known right-wingers, are alleged to have made their political intentions clear.

These declarations of loyalty to the cause – which is ultimately an independent Boer nation within South Africa's borders – are laced with hints at attaining this by violent means.

The accused, except Trollip, have denied the charges against them. They have also denied the Ficksburg meeting took place.

In affidavits filed this week in support of their bail application, two of the accused, Boonzaaier and Prinsloo, have said their businesses are suffering while they remain in custody and further that their health and families are being negatively affected by their continued imprisonment.

Arguments for bail will be heard on Friday.