De Doorns strike: Media in the line of workers’ ire 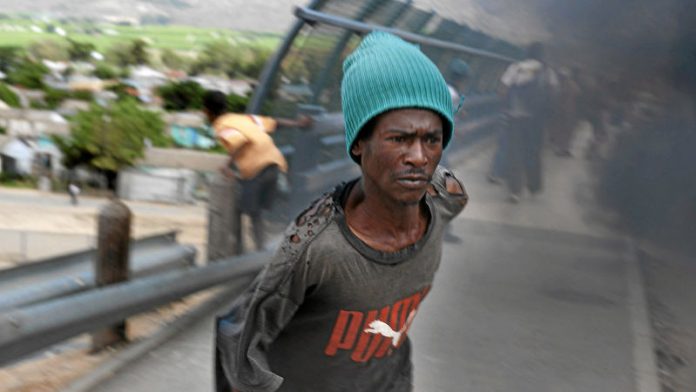 Something whirred past my head. I thought it was a bird. I turned and looked at the group of protesters standing on a side street in De Doorns East alongside the N1. An old man with a walking stick standing among them was shouting at police who were on the highway about 50 metres away, goading them with foul insults.

It was nearing the end of a hot Wednesday and I had stopped shooting, but the camera hanging from my neck clearly identified me as a photographer. I was trying to make my way out of yet another precarious situation and I was concerned about my car after a fellow journalist's vehicle was set alight earlier in the day.

"Did you throw a stone at me?" I said to them. They were mainly youngsters. As with a lot of the day's protests it was the children, some as young as 10 by my estimation, at the forefront.

"Go fuck yourself," a young man said as he lurched forward and hurled a rock at me. The rest of the group followed his lead and I had to fall back quickly and try to keep track of the incoming projectiles. One of the group, in his late teens, had a catapult and it was his stone that nearly hit me on the head.

The police's tactical response members on the N1 saw the flurry and opened up with rubber bullets, scattering the group, who took cover behind the walls of houses.

I arrived in De Doorns before sunrise on Wednesday morning and all was quiet in the Stofland informal settlement on the outskirts of the farming town. The only bridge over the N1 from the low-cost housing area of De Doorns East to Stofland was empty at first, but people started gathering and toyi-toyiing as the morning progressed. Tires were set alight and the bridge was blocked.

Young boys posed with stones for news photographers in front of the burning tyres, with acrid smoke filling the air.

Volley of rubber bullets
But it soon turned. A group of workers was gathering at the sports field, apparently waiting for leaders to inform them about the wage dispute. At around the same time some workers and young boys started throwing stones from the bridge at police on the highway. More protesters from the informal settlement joined in.

Up until this point police units had been monitoring the situation and showing a strong presence, but this was the trigger that made them unleash a volley of rubber bullets and tear-gas grenades up at the bridge and into shacks. A running battle between stone throwers and police in armoured vehicles ensued as the workers from the sports field mobilised, overwhelming the police and marching straight on to the N1, littering the road with stones and rocks, and setting up rock barriers.

I found myself repeatedly caught up with protesters telling me not to take pictures, threatening me with rocks and stones as I walked along the N1 with the crowd. Small fires were being set along the road and the air was thick with smoke.

Running battles on the N1 between the police and protesters forced many off the road into private property, which they also set alight. I tried to follow this to take pictures but every time I got close protesters threw a barrage of stones at me and other photographers. At one point I felt a small whip on my back and turned around to see a man holding a sjambok warning me not to take pictures of stone throwers.

"Why aren't you taking pictures of what the police are doing!" he said. "I am," I shouted back. I had been doing so the whole day.

"We're going to take you to court," shouted another threateningly. "We didn't invite you to be here!"

Where did this relentless antagonism come from?

"The media is working with the police, they are the devil!" I heard one of the farmworker leaders say on the PA system in the distance. His voice was clear above the sounds of more rubber bullets being fired.