Alarm over Zim deaths in custody 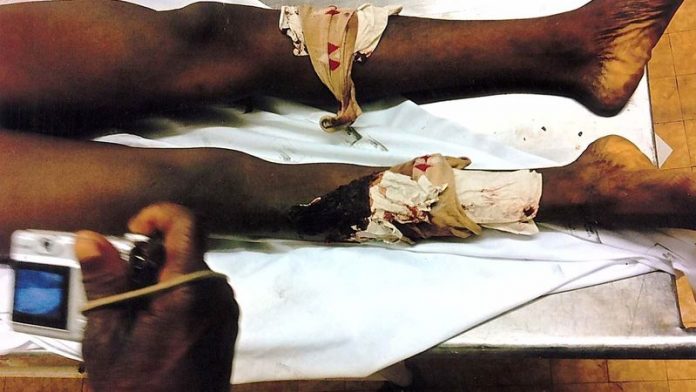 ZLHR, a non-governmental organisation that fights for the rights of citizens by instituting litigation and representing victims, said it has documented evidence of a trend of people allegedly being tortured and killed after being arrested.

A senior police officer told the Mail & Guardian that criminals have become a "bother and burden to the state" and that a policy of killing criminals in custody "is nothing new in the force".

The lawyers' body claims to have documented more than a dozen cases over the past two years in which suspects have died in suspicious circumstances.

Tawanda Zhuwarara, a ZLHR member who litigates for the relatives of suspects that have died in police custody, said he had noticed "a disturbing pattern, and the similarities cannot be mere coincidence. Suspects are arrested, injured while in custody [and] suddenly they are allegedly shot while allegedly attempting to escape."

Glaring discrepancies between police reports and state autopsies, on the one hand, and the testimony of relatives, friends and independent postmortems on the other point to possible countrywide killing of suspects flowing from an undeclared policy, the ZLHR said.

"We have noticed an unusual pattern, especially in the vehicle theft squad. There is either gross complicity or, more likely, a culture of impunity regarding the death of suspects in police custody," Zhuwarara said.

Legal dossiers and M&G investigations have revealed that:

Later Amison Ngundu, whose son, Emmson (see previous point), was arrested with Dzigarwi, said that both youngsters were allegedly shot and killed by vehicle theft officers while trying to escape. Chiwaridzo said she was not invited to witness the postmortem.

The court ordered a second postmortem on Dzigarwi, which was carried out by an independent pathologist. The report by pathologist SR Naidoo found that "it is most likely that the victim was shot through the back first with a muzzle at a distance [of less than] 45 to 60 centimetres away from his back; [later] he was shot at close range with the muzzle of [the] firearm two to three centimetres away from the skin on the right side of the neck".

Naidoo noted extensive bleeding under the skin and in the buttock and limb muscles that "could have been caused by blunt weapons or instruments". His report also said Dzigarwi may have gone for at least 36 hours without food, as there was nothing in his intestines.

The acting head of the vehicle theft squad, Lovemore Nxumalo, said the police postmortem report showed that the dead man had "covered a distance of about 15 to 20 metres" before being shot.

In a letter to the police, the deceased man's brother, Johannes Muchadenyika, said the family knew that Wellington was arrested for allegedly stealing a cellphone a day before his death and had been detained at the Dombotombo police station. When relatives asked about Wellington's whereabouts, police said he had been involved in an accident and was at the Marondera Provincial Hospital. The hospital however said, he had never been admitted. Johannes said Wellington's body had "several bruises and a broken shoulder bone. The shoulder was detached and virtually hanging by the skin". The family said it did not receive a postmortem report.

A day later, his brother was informed that Matanda had committed suicide by shooting himself.

At the time, the police said that the suspect had smuggled the firearm into the cells. Independent pathologist Salvator Mapunda, who acts for the lawyers' body, said that it was highly unlikely that Matanda's death had been a suicide.

The ZLHR also faces legal hurdles in its quest to obtain justice for the families of dead relatives.

In terms of the Inquest Act, a private individual is not allowed to institute an investigation into a death in police custody. It is the responsibility of the police to report a sudden death to a magistrate, who may take steps to ascertain the cause of death or to bring the alleged murderers to justice.

"The problem is that the investigation of a death in police custody is the prerogative of the police, who investigate themselves. Their actions are not open to public scrutiny and they are not accessible to any aggrieved person because of statutory impediments," the ZLHR's Zhuwarara said.

"Once in police custody, you are at the complete mercy of the state."

Police spokesperson chief superintendent Oliver Mandipaka's cellphone was unavailable and assistant police commissioner Charity Charamba could not be reached for comment by the time of going to print.

When the police become the suspects

Job Akili's uncle, Eric Chivhunga (37), died in police custody on November 21 last year. A day before he died, Chivhunga was arrested by Mubayira police in the rural Mashonaland West province, after a scuffle with guards at a private farm where he was apparently caught collecting firewood.

Akili said the family is still in the dark about why Chivhunga was arrested and how he died. The police have not provided any information, he claimed.

"The circumstances are unbearable. The police beat him to death and dumped his body at our home," Akili alleged.

"But we refused to bury him [and] the police again took his body. We wanted details as to who killed our relative and why."

Chivhunga was buried after "a long struggle", Akili said.

The family was initially denied a burial order after ordering an independent postmortem. This indicated that Chivhunga had died of head injuries and a blood clot in the chest.

Chivhunga's wife gave birth to a baby boy two weeks ago in Mhondoro.

"A son is going to grow up without a father. I'm wondering how that will be explained to him," Akili said.

"Should we now fear the police? What have we done to deserve this?" – Inyasha Chivara