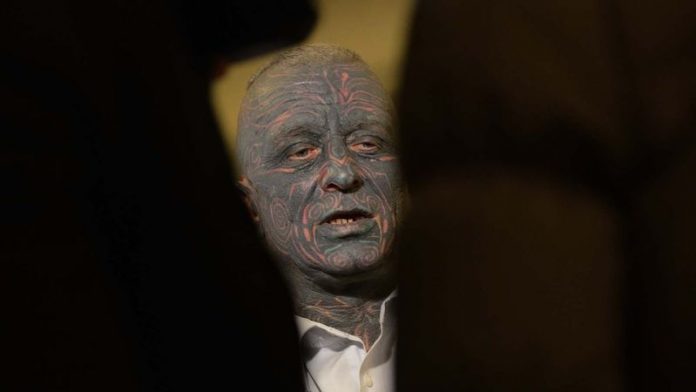 Vladimír Franz has a face you remember. As well as being an opera composer, a painter and a professor at the Academy of Performing Arts in Prague, he is currently in third place in the presidential race in his native Czech Republic. He is also covered from head to toe in tattoos.

Anecdotal evidence suggests that tattoos are ever more acceptable in society, but facial tattoos are still quite uncommon. Alex Binnie is a tattooist who works out of the Into You studios in Brighton and London.

"It's pretty unusual even now," he says. "I've been in the tattoo trade for more than 25 years; I know people who've got even more heavily tattooed faces than [Franz's], but you tend to see them at tattoo conventions.

"Tattooing is more acceptable all over so people don't freak out quite so much at every tattooed face," Binnie continues. "If you know someone well, you no longer become distracted by it and the people in the Czech Republic are obviously used to this guy."

Removing facial tattoos
I asked Dr William Clayton, a dermatologist at the Skin Laser Clinic at the Royal Free Hospital in London, if he saw many clients wishing to remove facial tattoos. "Not many," he says. "I might see one or two a year." But there's an exception: "Inside lips – we see a few of those. People sometimes get rude words tattooed inside their lips so they can show them off down the pub."

A cursory look on the web brings up vague notices of superficial links between face tattoos and higher suicide rates. "I haven't got any academic papers I can quote you," says Dr Clayton.

"But certainly the people I've seen have had colourful lives, put it that way. It's quite a statement to make, to have your face tattooed. And sometimes it's quite an angry thing, with themselves or with society. It's certainly very significant."

Binnie says: "Getting heavily tattooed, especially in the face, can be a way of attempting to resolve inner conflict and of course, like other things, it may not always work." He pauses. "It's obviously worked for Franz, because he's a successful guy running for president."

At least Franz's tattoos are well thought out – consider the case of Eric Hartsburg in Indiana, the not-so-proud owner of a face tattoo of the unsuccessful Romney/Ryan bid for the White House. He is getting it removed. – © Guardian News and Media 2013

Injury saw the Olympic champion dubbed an underdog going into the race he won in record-breaking fashion in Rio. But it’s a position he knows well, and now he has an extra year to heal and train
Read more
Advertisting
Continue to the category
Coronavirus