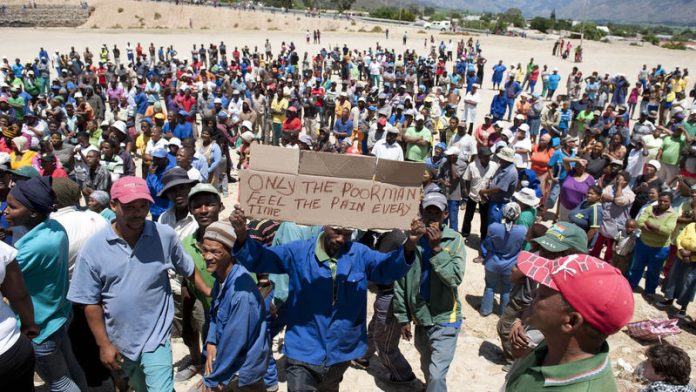 A fundamental rethink of the farming sector is required if the impasse between farmers and striking workers is to be resolved. This is according to Professor Ben Cousins, National Research Foundation chair at the Institute for Poverty, Land and Agrarian Studies.

Striking farm workers in the De Doorns and surrounding areas are demanding a wage increase from R69 a day to R150 a day, which farmers claim is unattainable.

A recent report by the University of Pretoria's Bureau for Food and Agricultural Policy has found that the farming industry would not be able to pay more than R104 a day without turning to mechanisation to improve worker productivity.

"I don't think agriculture can pay very high wages or create lots of jobs. We need to work within the room we have to maneuver. Farmers and workers need to come together and say 'These wages are unacceptable. What can we do?'," he said.

This would mean working with the tradeoffs that would be required and accepting that some jobs may be lost, he said.

Cousins pointed out that recent research has shown that farmers capture only 18c on the rand value of table grapes. Levels of profit in the value chain are very low, he said but at the same time, it farmers and workers might be able to capture more of that value through collaborative projects.

Jobs, jobs, jobs
Meanwhile, the bottom line remains the same – too many people areunemployed, and even those who are employed live in poverty because of low wages.

"The fundamental issue is jobs and decent wages. People are coming to places like De Doorns because there are some jobs available. In the places they're coming from, there aren't any," he said.

"We need formal jobs in the formal economy for large numbers of people. Then land reform, and small scale farming can make a difference but they're not a silver bullet."

Mercia Andrews, director of the Trust for Community Outreach and Education, said government should have done a great deal more to take this protest forward.

"They should take quite a bit of responsibility, given that the [R69] minimum wage was set by them," she said.

Andrews said that even though the department of labour had begun its consultations on factors concerning the sectoral determination on wages and working conditions, it needed to recognise problems that were distinct to the sector.

"Half of the time the isolation of farm workers means they don't actually get there. The consultations are in the main centres – Worcester or Robertson – and your farm is 38km or 42km from the centre, how are you supposed to get there? All these things are not taken into account," she said.

Unrealistic expectations
Brian Ashley, director of the Alternative Information Development Centre, said expecting farmers and workers to negotiate as equals was unrealistic, given the longstanding feudal type system that defines labour relations on many farms.

"It underestimates the completely skewed power relations between farmers and workers," he said.

Great distances separated farm workers and trespassing laws prevented then from entering other farmers' property in order to speak to and win workers over to unions.

Instead, government should immediately intervene to make a ruling on wages, he said. "You can not have a national minimum wage for farmers of R69," he said.

"You can't put the interests of the market or economy ahead of people's living conditions, or say we can only afford slave conditions." He called for government to legislate a R150 of minimum wage and immediately institute an inquiry into living and working conditions on the farms.

Ashley said farmers and government needed to ask "very serious questions" about what needed to be done to make the agricultural sector viable.

"This is a historic strike, it's not coincidence that it happened directly after Marikana," he said.

"It radicalised people. Even among farm workers … seeing workers stand up and fight, may have had an impact."

Hatting, who works with farmer workers, said the basic root of the problem is the appalling work conditions some farm workers live under.

"We find workers who get paid R69 [a day] but farmers will deduct things for electricity or gas," he said.

Victimisation
Meanwhile, some workers who try to join unions also report victimisation and claimed some farmers create incentives for people not to join unions, like offering slightly higher wages to those who shunned unions.

"It's only protests from farm workers that will get them to the table. If it stops it might die down but it will flare up again," he said.

Earlier this week Tony Ehrenreich, secretary of Cosatu in the Western Cape, said workers are ready to negotiate but that farmers had not shown the same willingness.

"Public hearings have started and we appreciate that. We are calling on government to intervene here because these people are showing us there is no good faith," he said.

Keni said workers were not just protesting for a higher wage but for better working conditions.

"This thing is not about R150 only. It's about the conditions people are working under. Protective clothing, UIF – for seasonal workers as well – your provident fund as well, those are the things we're talking about," he said.

No support
Farm workers said they plan to intensify the strike this week.

But Agri SA president Johannes Möller said that no union in the sector has the support required in order to secure a mandate to negotiate wages. According to Möller, only 5% of farm workers are unionised nationally.

But, he said, farmers will be talking to the minister of labour and other interested parties to decide how to take March.

At the same time, Möller admitted that a wage increase alone would not resolve the unrest.

"There's a lot of socio-economic problems that we have to address at some point and it's not just about wages. It's about service delivery, people living in abject poverty in the rural areas, and too little job opportunities," he said.

"We've got to take a holistic view of this. Not just agriculture but government will have to lead and we'll have to tackle this problem of rural poverty in a rural way to try to solve it. It's not just going to go away. R100 a day won't fix it either."