Dreamliner grounded indefinitely by US, others 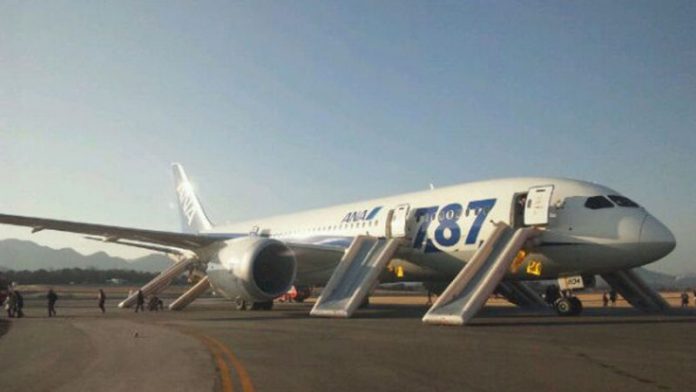 The US Federal Aviation Administration (FAA) said on Wednesday it would temporarily ground Boeing's newest commercial airliner and insisted airlines would have to demonstrate the lithium ion batteries were safe before they could resume flying. It gave no details on when that might happen.

It is the first such action against a US-made passenger plane since the McDonnell Douglas DC-10 was grounded in 1979 after a deadly crash in Chicago, analysts said.

Japanese Transport Ministry Vice Minister Hiroshi Kajiyama said the grounding was for an indefinite period, and India's aviation regulator said it was unclear when the aircraft would be back in service. A spokesman for the European Aviation Safety Agency said the region would follow the US grounding order. Poland's LOT Airlines is the only European airline currently operating the 787.

Boeing said in a statement it was confident the 787 was safe and it stood by the plane's integrity.

"Boeing is committed to supporting the FAA and finding answers as quickly as possible. The company is working around the clock with its customers and the various regulatory and investigative authorities. We will make available the entire resources of The Boeing Company to assist," chief executive Jim McNerney said.

Passengers leaving United Airlines Flight 1426 in Houston – which had taken off from Los Angeles moments before the FAA announcement – reported an incident-free trip.

"I fly over 100 000 miles a year," said Brett Boudreaux, a salesman from Lake Charles, Louisiana. "That was one of the most relaxing flights I've ever had. I hope they sort it out. It's a hell of a plane."

Potential cost
Boeing shares fell 2% in after-hours trading to $72.75 after the FAA announcement on Wednesday.

"Ultimately, you can view it as a positive thing if they can resolve what the issues are and give people confidence in the safety of the aircraft. In the near-term, though, it's a negative. It's going to force the company to make significant investments," said Ken Herbert, an analyst at Imperial Capital in San Francisco.

The shares of GS Yuasa Corp, a Japanese firm that makes batteries for the Dreamliner, tumbled 4.7% in early Thursday trading in Tokyo. The stock has dropped 18% since January 7 when one of its batteries exploded in a parked Japan Airlines 787 at Boston Logan International Airport – one of several recent mishaps that have plagued the new lightweight, fuel-efficient jetliner.

Richard Aboulafia, a senior analyst with the Teal Group in Fairfax, Virginia, said the grounding would send jitters through investor circles, but was probably associated with Boeing's decision to build 50 planes before the 787 model entered service, rather than a more serious issue of plane design.

"Most likely it's a very big headache and they're being cautious, but there's still the possibility that it's much worse and much more expensive for Boeing," he said.

"There's clearly a pattern of problems with this aircraft but we don't know yet how many are teething pains and whether or not there's a more serious problem," Aboulafia said. "Most likely we're talking about teething pains based on the haphazard upfront manufacturing process. Building 50-something planes with lots of rework, all completed before certification – that's just a recipe for trouble."

The 787, which has a list price of $207-million, represents a leap in the way planes are designed and built, but the project has been plagued by cost overruns and years of delays. Some have suggested Boeing's rush to get planes built after those delays resulted in the recent problems, a charge the company denies.

Battery problems
In Wednesday's incident, All Nippon Airways Co Ltd said instruments aboard a domestic flight indicated a battery error, triggering emergency warnings. The incident was described by a transport ministry official as "highly serious" – language used in international safety circles as indicating there could have been an accident. Both ANA and Japan Airlines then grounded their 24 Dreamliners pending checks.

The use of new battery technology is among the cost-saving features of the 787, which Boeing says burns 20% less fuel than rival jetliners using older technology.

Lithium ion batteries can catch fire if they are overcharged and, once alight, they are difficult to put out as the chemicals produce oxygen, Boeing's chief engineer for the 787, Mike Sinnett, told reporters last week. He said lithium ion was not the only battery choice, but "it was the right choice".

In Asia, only the Japanese and Air India have the Dreamliner in service, but other airlines are among those globally to have ordered around 850 of the new aircraft. Chile-based LAN also grounded its three 787s in compliance with the FAA warning.

Boeing has said it will at least break even on the cost of building the 1,100 new 787s it expects to deliver over the next decade. Some analysts, however, say Boeing may never make money from the aircraft, given its enormous development cost. Any additional cost from fixing problems discovered by the string of recent incidents would affect those forecasts and could hit Boeing's bottom line more quickly if it has to stop delivering planes, analysts said.

Fiancial pressure
Moody's Investors Service said the 787 grounding was a negative credit development for Boeing, but ratings were not expected to be impacted for now. "This could pose new operating and financial pressures for Boeing, including further delay in delivery schedules and future order flow, as well as ongoing reputational risk," noted Russell Solomon, Moody's Senior Vice President and lead analyst for the company.

Barring a prolonged grounding or a severe and uncontained crisis, aircraft industry sources say there is no immediate threat of plane cancellations. Among other reasons, they cite the heavy costs of retraining and investing in new infrastructure, as well as a shortage of alternatives in an industry dominated by just two large jet suppliers.

The Dreamliner's problems could sharpen competition between Boeing and its European rival Airbus, which itself experienced a dip in sales for its A380 superjumbo following problems with wing cracks a year ago. The A380 crisis has since eased and most airlines report the aircraft are flying full. – Reuters

Boeing seeks to exit crisis mode as it reports results