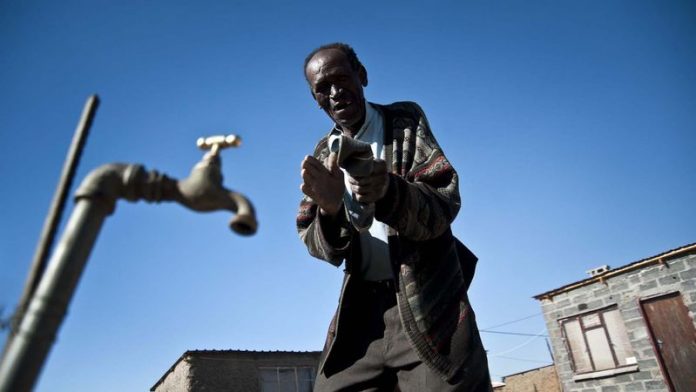 The small Mpumalanga town hit the headlines a year ago when heavy rains washed pollution into its dam – its main source of water. The acid mine water in the dam overwhelmed the treatment works and the water became dangerous.

The next seven months saw an intermittent supply from water tankers to residents in the town and its township, Silobela. It also led to a court case in which a precedent was set for compelling government to provide people with their constitutional right to clean water.

In September the municipality declared the water safe, but residents were still hesitant to drink it. In December they started complaining that the water smelt like bleach again – their informal indicator that something is wrong with it.

Solly Mashinini, spokesperson for the Silobela community, confirmed that people were queuing at the local mosque for water. This was the community's most consistent source of clean water throughout the crisis because the mosque has access to a spring. It attracted lines of residents with wheelbarrows that snaked from the furthest parts of the sprawling community.

"People are worried about the water and they are not using it, so we have sent samples for testing and then we can see what we will do," Mashinini said.

Silobela residents said that the water smelt like bleach and they were afraid to use it. They also said people had had diarrhoea, but were unsure about whether this was because of the water. Townspeople said their water became "funny" last week and smelt "like a reservoir with too much algae floating around".

Misconceptions
Emma Algotsson of Lawyers for Human Rights, who was instrumental in taking the municipality to court last year, said: "People are collecting water at the mosque again because they do not trust the municipality or water tests. We knew this was coming because nothing has changed since the last crisis."

The court had ordered the municipality to communicate with the community so there would be no misconceptions, but Algotsson said this has not happened. Residents confirmed this.

Water tested in previous months had been of good quality, she said, but Lawyers for Human Rights is waiting for the results from a new series of tests. Until then people should not drink the water if they do not trust it, Algotsson said.

Municipal spokesperson Wonder Shabangu said the water plant had been improved since last year's problem and would be expanded.

"We are 100% sure we can deal with any other problems with our water," he said. He also expressed full confidence in the current water supply: "The water is perfect."

Koos Pretorius, director of the Federation for a Sustainable Environment, said he had been keeping an eye on neighbouring mines, which the department of environmental affairs blamed for the acid water. "They [the mines] don't seem to be changing anything. As soon as the first good rains fall the problem will be back," he said.

Sputnik Ratau, spokesperson for the water affairs department, said that good work was being done with the main mines around Carolina.

"Co-operation is being received from the … mines and some of them are actively correcting matters identified and raised with them in the directives they had received," he said.

Water samples upstream of the community's dam had "shown great improvement". And recent rains had also flushed out much of the polluted water, allowing for fresh plant growth.