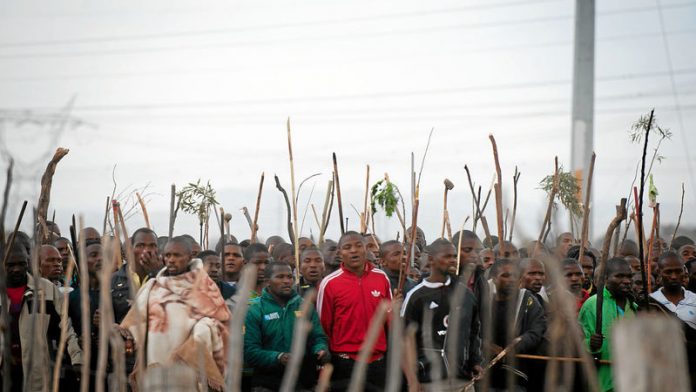 Cyril Ramaphosa, elected last month as ANC deputy president, enjoys a reputation that is in many ways untarnished. One important case in which questions have been raised about his actions, though, concerns his intervention on the day before last year's August 16 Marikana massacre in which police killed 34 miners.

In October, advocate Dali Mpofu, representing injured miners at the Farlam commission of inquiry, drew attention to a number of emails ­circulated between Ramaphosa and senior Lonmin and government officials.

At the time, Ramaphosa was a highly respected member of both the ANC national executive committee and the Lonmin board. As a result, his views are likely to have been considered important by other key role players. They are likely to have had a significant influence on the decisions taken to resolve the situation.

Ramaphosa's messages would appear to confirm that government officials at the very highest level, including Safety and Security Minister Nathi Mthethwa, were engaged in what was happening at Marikana and played a role in shaping the police response.

In one message to a senior Lonmin official, Ramaphosa said that the "terrible events that have unfolded cannot be described as a labour dispute. They are plainly dastardly criminal and call for concomitant action".

In another message, he indicated that "we are essentially dealing with a criminal act" and that he had "said as much" to Mthethwa.

Inappropriate
It was, of course, valid for Ramaphosa to be concerned about  criminal acts. As he emphasised in his recent interview with CNN's Christiane Amanpour, at the time when he sent the messages, a number of people, including several miners, two mine security officers and two policemen had already been killed.

Nevertheless, it remained inappropriate to characterise the strike in its entirety as criminal.

It is also important to understand the reasons for the extreme violence that had taken place. The information available indicates that, five days before the massacre, a group of men from the National Union of Mineworkers (NUM) office at Marikana shot at a group of miners who were marching towards the office, injuring several of them.

This shooting and the failure of the police to take any action to apprehend those responsible appears to have precipitated the decision by the striking rock drill operators to arm themselves in their own defence, a decision that was integral to the escalation of violence that followed.

This shooting has apparently been conceded to by the NUM. In his cross-examination by Lonmin's ­lawyer, Schalk Burger, the Association of Mineworkers and Construction Union's Joseph Matunjwa apologised for his earlier assertion that people had been killed in the shooting. But he remained adamant that it had taken place. The NUM's legal counsel did not dispute this.

It is likely that, when he intervened, Ramaphosa did not envisage that the "concomitant action" that should be taken should include proper investigation and arrest by the police of those involved in this preliminary shooting.

Ramaphosa, along with many others, probably made the mistake of assuming that the violence that had unfolded was purely the result of the "criminal" nature of the striking miners. Implicitly, the "concomitant" action he called for was to be taken against some or all of the miners.

Minimum force
What Ramaphosa probably was also not aware of was that, since at least July 2011, Mthethwa has promoted a doctrine that encourages police to use maximum force. At a national summit on the killings of police on July 8 2011, Mthethwa talked about "the need to use maximum force against violent criminals and minimum force in dealing with fellow citizens". Though it is illegal, this doctrine has been endorsed by Mthethwa on several occasions. Police are officially required to adhere to the principle of minimum force.

In his interview with Amanpour, Ramaphosa maintained that his intervention was motivated by concern to prevent further loss of life. But rather than the prevention of loss of life, it appears to be the alleged criminality of the miners' actions that he emphasised to Mthethwa, among others. If he did so, then it is likely that this served to confirm to Mthethwa that the miners as a group could be labelled as criminals. In terms of Mthethwa's own doctrine, they could now be regarded as appropriate targets for maximum force.

Mthethwa is likely to maintain that the events at Marikana were operational and that he did not intervene directly in decisions. But considering not only Ramaphosa's indication that he engaged with him and the hands-on approach that Mthethwa has taken in other matters, it is likely that he played a direct role in shaping the decisions that were taken. If this is true, then it is likely that he gave his blessing to forceful action against the miners consistent with his "maximum force" doctrine.

If this is so, then Ramaphosa's intervention, with its apparent emphasis on the alleged criminal nature of the miners' actions, may have played an important role in contributing to the course of events that unfolded.

But, though Ramaphosa's intervention might have been in some respects critical to what happened, it does not mean that he should be held directly responsible for the massacre. In the absence of Mthethwa's unlawful doctrine, Ramaphosa's emphasis on the miners' alleged criminality would not have had the same devastating implications.

Far more than Ramaphosa, it is therefore Mthethwa who most urgently needs to account for the role he played in relation to the massacre.