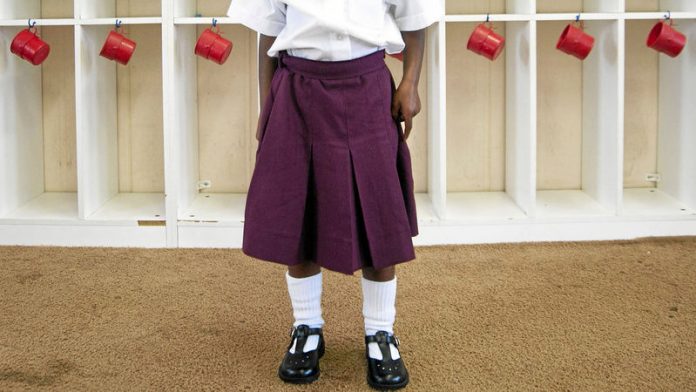 At some stage in primary school, I glanced down at my legs in my black pleated tunic, looked at those of my female classmates and decided that it would not be fair to subject my legs to the world’s gaze. I am not sure at which point I put this resolution into action, but throughout high school, I wore only slacks.

I picked extramural activities based on the type of cover required. Softball was bearable with its three-quarter pants. Netball, with its tiny, flaring skirts, I hated the most. I hung out on the sidelines during swimming and athletics season in the first term (three months long) because it made me anxious. I stuck to debating, the book club and community service, where I got to keep my pants on. My mother sighed, my sisters rolled their eyes, but I stuck to it until my late 20s, editing my experiences so that the public would have as little interaction as possible with the bottom half of my body – a practice that now sounds absurd.

I thought about this while sitting with a group of women over lunch recently – authors and a magazine editor – mulling over why a woman’s body image (from girlhood to adulthood) is fraught with so many issues. It is a question that is growing old with age, yet seems ­unresolved. How does it start and who is responsible?

Is it the images in magazines and on television? “That is a weak excuse,” the ­magazine editor said.

“How can girls have a healthy body image when we live in such a sexually violent society,” asked an author. We considered these statements for a few minutes. But we also happily acknowledged that this is not the universal status quo in this country. I grew up among women who adorned their bodies, no matter the shape, as if they were worthy of praise. And I see this happening with other races, with a little bit more Gaga-style ­militancy, as if young women are sending the message that their ­bodies are their business.

Position of inferiority
But never in our discussion did we consider the culpability of the girl herself in the conception of her own body image. Or her right to chop and change and make mistakes during a time in her life when it is difficult to manoeuvre. It is the one thing that riles me about the empowerment of women. Far too often, it presupposes the woman is in a position of inferiority, as a victim of outer forces. I find this argument fraying in the age of self-branding, in which each of us dictates how we want to be seen. With our avatars being our own creations, I see so many pouting, posy, cleavage – full self-portraits.

Or, as in the case of the Facebook post of a friend, a business person, a picture that takes inspiration from Baywatch. I rejoice in the fact that girls, even with few resources, can now broadcast themselves to the world in their own image. But that means that the gaze – and the blame – is no longer just directed at the proverbial male behind the lens. Girls are self-authors. I believe we have always been.

I eventually came round to accepting my own body, albeit a little late. I suspect that my insecurity as a thin girl came from being born into a community that celebrated the full-figured women I saw walking down the street and who I wanted to look like when I grew up. It was a form of power play. I was holding out on the world and myself with a “wait till you see me grown up” standoff that lasted a bit too long.

What I now also realise, a bit shamefully, is that it was narcissistic. The notion that people had nothing better to do than laugh at my legs exposes me as a very self-absorbed young woman. But I was also smart, as many girls are, and eventually I made sense of it all. And I have the right to own every part of that story.