War reaches Malians on the run 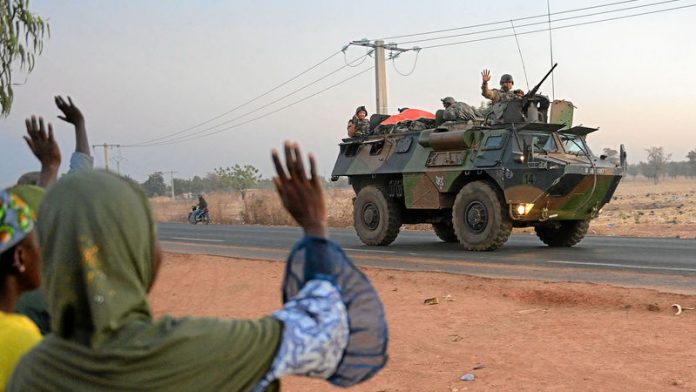 The city of Segou used to welcome visitors with a sign for its industrial zone – a scheme designed to encourage industry in this impoverished part of northern Mali. But now the town has a new welcome notice. Someone has scrawled in broken French in huge red letters on the side of a wall on the outskirts of town: "Our soldiers are at war!"

No one knows how many refugees have arrived here since rebel fighters began advancing further south after months of controlling the desert in the north of Mali.

But hundreds have fled as towns on either side of the de facto border between north and south became the scene of fierce fighting between Islamists, Malian troops and, since January 11, the French.

One of them was Asadek Dicko (20) who left his home town of Timbuktu when Islamists seized control there in April, settling in Mopti, the northernmost town under government control. Sitting on a low chair in the thick Sahelian darkness, lit only by the light of a mobile phone torch, Dicko spoke in hushed, melancholic tones about the fear he felt when the town he had believed was a safe refuge came under threat.

"Timbuktu became like a prison under the Islamists; we thought Mopti would be safe," said the young man wearing a striped shirt and blue jeans. "Mopti was full of refugees from the north like me but, when the fighting started in Douentza and Konna, I could not stay there. I am a young man. If the rebels came, they might have thought I was with the army. They are crazy, and they were coming to Mopti. I started to panic. I came to Segou because my brother was living here and I knew I could stay with him. Things are difficult here. We don't have enough. The little we have, we share."

Segou is rapidly becoming the new front line in the battle for control of Mali. Dicko said he now feared for his safety in the town too.

Desperate reality
"I hear what is happening in Diabaly," he said of the town that was said to have fallen to the rebels on Monday. "I had never even heard of Diabaly before but now I feel scared. The Islamists seem to be approaching – they are close."

Not far away, Zainab Dicko (no relation), a primary schoolteacher from Timbuktu, sat in a small, airless room with her two small children. The family fled to Segou in November, after enduring months of Islamist rule that forced her school to close, robbing her of an income and her children of an education.

Zainab's neat, shoulder-length hair concealed a desperate reality. Like so many displaced people in Mali, she does not live in a camp but with a host family, her sister's – she and her five children joining already cramped conditions. It's hard to believe that her compound – crisscrossed with washing lines, with its small courtyard surrounding a smouldering coal fire and pile of discarded tyres – is home to eight families. She sleeps in a room with 10 other people.

"We left Timbuktu because of the suffering we endured there," she said. "The Mujao [Movement for Unity and Jihad in West Africa] and the others harassed us. We are Muslims but they imposed sharia on us by force. They are truly terrorists."

The sound of children crying was all but drowned out in her compound by a radio broadcasting French news. It speaks incessantly of the war in Mali and the arrival of French fighter jets, currently bombing towns about 100km north of Segou.

Like many Malians, Zainab has welcomed the arrival of the French military with open arms. "It is a very good idea for the French to come. They should have come a long time ago, truly. Now so many countries are helping us. I have heard that foreign planes are liberating the whole north."

Abstract prospect
Despite reports of many civilian casualties in the north, she had unshakable confidence in the foreign intervention. "Yes, there are bombs falling but they are always following the enemy," she said.

The prospect of bombs falling seems an abstract prospect elsewhere in the government-controlled south of Mali.

On the only road north – a single-lane route that starts in Bamako and continues in more or less a straight line through several thousand kilometres of progressively arid terrain – the atmosphere was deceptively calm. In one town, Casselai, a man wearing a bright orange T-shirt, slumped in a hammock outside a shop front while, nearby, a woman arranged new hair extensions on her lap. Trucks headed south towards Bamako, loaded almost to the point of toppling over with tightly packed white sacks of charcoal on top, and equally packed with passengers beneath.

Gone were the broken military trucks that littered the roadside a few months ago, casualties of Mali's failure to equip and resource its armed forces.

Since a state of emergency last week, the army has enjoyed an influx of pick-up trucks, vans and four-wheel drives, sequestered from civilian organisations and companies to assist in the war.

Further north, there were glimpses of the crisis engulfing the country, like tiny cracks in a windscreen. In Fana, an administrative town 250km from Bamako, two young men were erecting a banner with the French flag on one side, and the Malian flag on the other. Further evidence, it seemed, of the general relief that has greeted the arrival of French forces.

But gratitude co-exists with pride, with many patriotic young Malians in a belligerent mood as the country remains locked in a tug of war between well-armed rebels and the international military presence.

"The rebels may try to come to Bamako but we are not afraid. We will fight them with batons and axes if we have to," said Ganda Fadiga (28), a taxi driver in Bamako. "I may fear suffering but I don't fear death."

But the situation in the north remains complex with reports that rebels have simply disappeared by integrating into the civilian population. "The terrorists have abandoned their camps, but now they have entered people's homes," said Zainab Dicko. "We are not free yet, but at least they no longer have time to impose sharia on us." – © Guardian News & Media 2013