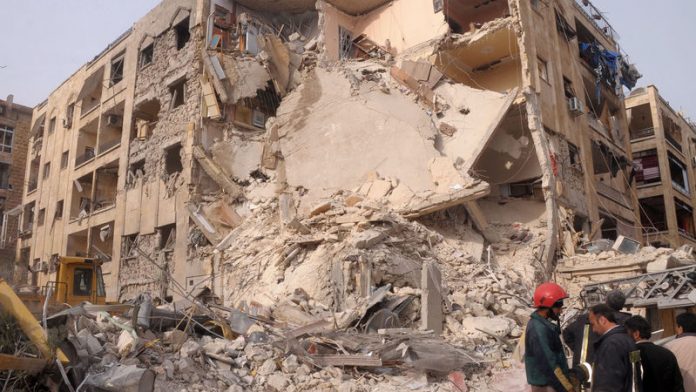 State television showed the collapsed side of a building and rubble spilling into nearby streets on Friday. A crowd sifted through the wreckage as medics loaded bloodied bodies onto stretchers.

It said the explosion had been caused by a rocket fired by a "terrorist group" – a term it uses to describe the rebels fighting to topple President Bashar al-Assad.

Activists said the building in Muhafaza Sakaniya, a government-held neighbourhood of a city fought over by the army and rebels for months, had been hit by a military air strike.

The British-based Syrian Observatory for Human Rights said at least 12 people were killed and dozens wounded in the explosion.

"The rebels do not have this capability yet," said Hameed Barrasho, an activist in Aleppo. "We have several reports of a jet in the area before the strike. This is the regime trying to sow more chaos in the city."

Over 80 killed on Tuesday
Car bombs, rocket strikes and summary killings are now daily occurrences across the country in the 22-month-old conflict and it is often difficult to determine who is behind an attack.

Two blasts at the University of Aleppo killed more than 80 people on Tuesday and each side blamed the other for that attack.

More than 60 000 people have now been killed in the conflict, which began in March 2012 as peaceful pro-democracy protests but descended into civil war after a state crackdown.

The opposition, mostly drawn from Syria's Sunni Muslim majority, is demanding that Assad surrenders power. He and his family, from the Shi'ite-linked Alawite minority, have ruled Syria for four decades starting with his late father Hafez.

Car bomb in South
Residents of the capital Damascus reported government air raids on rebel-held suburbs. The opposition holds a semicircle of territory around the city but has been blocked from advancing into central Damascus by heavy daily air and artillery strikes.

Opposition activists in the suburb of Douma, east of Damascus, posted a video of the bodies of at least 10 men who appeared to have been executed. The men's hands were tied, and most were shot in the head or the eyes.

Violence also hit further south. Activists said a car bomb exploded outside a mosque, killing at least five people and wounding dozens at a refugee camp in Deraa, near the border with Jordan.

The camp was made a city district after it was set up years ago for people who fled the Golan Heights after Israel occupied the Syrian territory in 1967.

Syrians fleeing the current violence had also taken shelter in the area, said the Observatory, which has a network of activists across Syria. The camp has been a site of clashes between rebels and state forces in recent months, it said. – Reuters