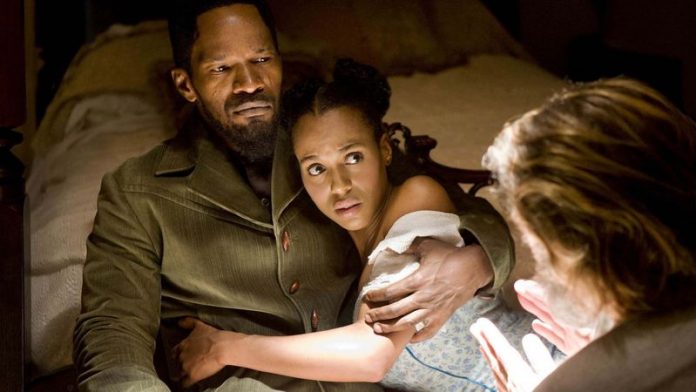 In the mid-1990s, my sister and I were nursing an A-list star’s film project through what I came to term “Hollywood Nightmare No 1”. I was the writer and became daunted by the madness but my ­sister sought to steel my nerve by quoting sacred text from the La-la Land bible: “Remember, it ain’t show art. It’s show business.”

As we consider the trajectory of Quentin Tarantino’s much-anticipated Django Unchained, this is a — if not the — salient thought to keep in mind.

Irreverent B-movie and grotesquerie devotee, sometimes brilliant, usually outrageous, Tarantino directs his talents towards slavery. Cue the claque and all the usual suspects. From the film’s announcement in early 2011, when copies of the 166-page QT-annotated script first began to circulate in the film blogosphere, controversy was guaranteed. Controversy was banked on and, to the immense satisfaction of its distributor, the Weinstein Company, box office-generating controversy is just what we have.

The story: in 1858, three years before the American Civil War and five years before the Emancipation Proclamation, German dentist turned bounty hunter Dr King Schultz (Christoph Waltz) buys Jamie Foxx’s Django from a chain gang of half-naked, scarred-back slaves walking barefoot through a bleak winter landscape in order to find the criminal Brittle Brothers. Django, who wants to be reunited with his wife, Broomhilda (Kerry Washington), shows an uncanny talent for the game, so Schultz suggests a pact: Django helps him to collect a season of bounties for one-third of the loot and he will help Django ­to liberate his true love.

As punishment for chasing freedom with Django, the proud, beautiful Broomhilda has been sold to Calvin Candie (Leonardo DiCaprio), owner of the notorious Candyland plantation, a devotee/breeder of slave-on-slave Mandingo fighting to the death and an all-round nasty piece of work. Candie’s greatest ally, and “house slave” par excellence, is Samuel L Jackson’s magnificent Stephen. Wagner’s Ring Cycle is cited. Not without reason. The journey is mythic in its challenges and very bloody.

Predictably, first to the post is fellow filmmaker Spike Lee, who declares Django disrespectful of slavery. “Slavery was not a spaghetti western,” he says, steadfastly refusing to view the film.

Close behind Lee stands a phalanx of tried-and-true veterans of the 20th century’s culture wars, who chime in with expected though often highly entertaining tropes, such as writers Ishmael Reed: “[Django] is a Tarantino home movie with all the racist licks that appear in his other movies”; and Cecil Brown: [Django] is “Hollywood’s nigger joke”, [which unintentionally] “reveals the inner game of how the Hollywood studio and the plantation slave institutions [have] exploited black people”.

Although the idea of Django caused discomfort among those who follow and care about such things and was multigenerational before the film’s release, after viewing, the determined distaste has been dominated by those of a certain age who fought honourably and with reasonable success to change all aspects of African-American degradation, who, out of necessity, pride and territoriality, remain ever vigilant for crimes against African-American dignity. Slavery was not a joke and shouldn’t be treated as anything remotely touching on such, especially when the study of history is so pitifully neglected in American public schools, especially by a white boy, and especially by this white boy, who wouldn’t know respect if it kicked him in the head — to no avail, because African-Americans of all ages have been attending in droves, with box-office receipts exceeding all expectations.

Second offence: the N-word. There are those who count these things and Django’s N-word count has been given as 110 (in the once notorious Jackie Brown, it was a mere 38). DiCaprio has spoken about his discomfort at having to use the word. His colleagues Jackson and Foxx counselled that only by using it could he descend to Calvin Candie’s depths, where the word was common currency, and explore his ­character’s hideousness. Washington describes herself and Foxx creating a psychological “N-word shield” during days of shooting when usage was at its peak. The fact that the word’s usage was era-appropriate holds little sway with those who would rather it disappeared for all time.

Adding insult to injury is the release by the National Entertainment Collectibles Association (Neca) of six Django action-figure dolls, for sale on Amazon.com. The age recommendation is 18 years and older and the full set is yours for $299.99. Neca has done the same for Kill Bill, Carrie and Friday the 13th. This is fan boy/girl stuff and hit the marketplace just as, 10 days after release, the furore was beginning to fade. Like clockwork, attention reignites. A Midwestern academic claims the dolls are “killing what is left of our dignity”. “Leaders” organise a boycott. Fans pull out their credit cards. The Weinstein Company smiles.

The movie
I first learned of Django in 2011 through the black film blog ShadowandAct where opinion was divided between tap-dancing excitement and “Lord, save us, please.” Though I enjoyed Pulp Fiction and Jackie Brown, I’m not a QT fan, primarily because of his predilection for blood. I dearly love a good action movie, but the chop-socky, spaghetti, B-movie viscous cascades so central to QT’s film nerd-directed oeuvre are not my thing.

My disposition was towards the “Lord, please” camp but, as the Christmas release date approached, I decided that seeing the film was a zeitgeist obligation. The Connecticut school shootings prompted several days of hesitation, for I grew up and now write in Connecticut, not far from the scene of the tragedy (and continue to search my soul about the entertainment industry’s influence on ­America’s addiction to violence).

However, as a voting member of the Directors’ Guild of America (and as a minor black film pioneer), I didn’t think I could post an informed list of nominees without having seen Django Unchained. I went in expecting to be cringing and angry, ­deploring QT’s arrogant ignorance, hoping to tolerate it at best. Wrong. I found Django wonderful, often thought-provoking and fun.

I thought the spaghetti-western references — in music, colour saturation, use of titles, costuming, set design, buckets of blood, mythologising — an entertaining hoot. Though the violence of Django’s revenge was grand guignol in its excess, the two places most emotionally fraught in terms of the brutal true nature of slavery — the flogging of Broomhilda and the Mandingo fighting (at the end of which I admittedly had to shield my eyes) — were dealt with in a manner far more Coppola than Peckinpah (or Tarantino for that matter).

I am the proud descendant of Georgia slaves and, as the director himself states, “the violence of slavery was far worse than anything [he has] put on screen”. Amen.

I did not find offence in QT’s use of the word “nigger”. In earlier films one could sense the man’s romance with the word was akin to that of a small child taking rapturous joy in being potty-mouthed. That tendency is not present in Django. In 1858, the word was used for black people in both North and South, by both black and white, by “men of good will”, like Mark Twain, and evil, racist sons of bitches.

I submit that, given Django’s circumstances, the word was used with restraint. A film about slavery with any verisimilitude would be an absurd anachronism if the word was avoided to soothe modern sensibilities. To those who fear that any usage of the word confers legitimacy upon it, I say that those wishing to join their vocabularies and destinies to the likes of Candie are already far gone down the road to perdition and diagnostic tools to ferret them out are always helpful.

Currently the word is in the closet, not the grave. Serious discussion and soul-searching demands saying the word.

But, most of all, I thought Foxx’s Django a film hero for all times, a “one nigger out of 10 000” who transitions from flogged and chained ignorance to avenging angel of withering intelligence. I would certainly like to see more of him — and Broomhilda, his princess. It is something I didn’t, for the most part, feel about 1970s blaxploitation heroes.

Following Hollywood Nightmare No 1, I was confronted with a choice: if I wanted more scriptwork in Los Angeles, I would have to spend months in a town where the vast majority of produced “black” work was the half-hour comedies, the stuff of horrible buffooning stereotype. These shows brought a lot of work to many African-American actors but I wanted no part of that continuing degradation so I turned my hand to the novel and later the essay. There are some who have suggested that the black actors working for QT are part of that sorry, powerless tradition. I don’t agree.

I was a desegregator in Connecticut growing up, the one dark face in all my schoolrooms, and, when lessons turned to slavery, all faces turned to me. What I wouldn’t have given in that day for a Django and his prancing horse (the actor’s own, by the way) to hold to my heart and shore up my soul? His poster would have been on my wall and, though I took leave of dolls at age six, his action figure on my desk. — © Guardian News & Media 2013