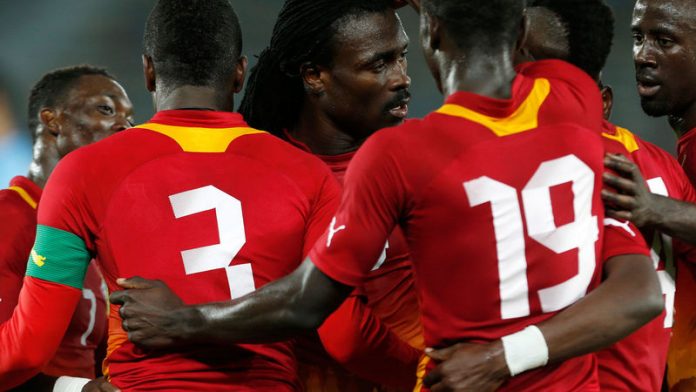 Ghana, picked by psychics in South Africa to win the 2013 Africa Cup of Nations, kick off their campaign on Sunday against DR Congo, a side never far from confusion and controversy.

The Black Stars have won this competition four times, but their last triumph was back in 1982, when they defeated hosts Libya on penalties.

Since flopping at the 2006 tournament, they have not failed to reach the last four.

Even when lacking some of their best players, they have impressed leading up to this competition with big wins over Egypt and Tunisia in Abu Dhabi.

South African psychic and spiritual healer Jamil Ahmad has picked Ghana as "the cream of the crop.

"Côte d'Ivoire or Ghana will take the Cup. Côte d'Ivoire were runners-up in the last tournament and Ghana are just the cream of the crop. They play with passion," said Ahmad.

Ghana enjoyed their finest hour in South Africa three years ago when they came within a whisker of becoming the first African team to reach the World Cup semifinals.

The Black Stars missed a spot kick in the dying seconds of extra time against Uruguay and lost the penalty shootout.

But from the team that caught the imagination of millions of South Africans in 2010, Kevin-Prince Boateng has retired, Sulley Muntari is out of favour, John Mensah and Andre Ayew injured and long-time absentee Michael Essien says he will end a self-imposed exile only later this year for World Cup qualifiers.

"South Africa is a second home for us. We won lots of hearts during the World Cup and we hope to do so again," promised skipper and striker Asamoah Gyan, who fluffed the chance to win the World Cup clash with Uruguay game from the penalty spot.

High hopes
Ghana will fancy their chances against a DR Congo side, who on Friday had to deny the resignation of French coach Claude Le Roy after another bonus-related upheaval.

Le Roy has admitted his team face a daunting task against a country he coached five years ago, but is pleased his team are not favourites.

"So many of their players were given their first international game with me – a young and new generation of players that has come through," said the experienced 64-year-old Frenchman in his second stint with the Leopards.

"It will be a difficult, difficult first game. We are not favourites in this group, we know we are ranked behind Ghana and Mali – both were 2012 semifinalists.

"But it's a good position for us. I like this kind of position."

Le Roy has been credited with getting several of the country's top Europe-based stars to return to the national team after they quit because of the perennial problems with the team.

Highly-rated Anderlecht striker Dieumerci Mbokani is one such player and he said they hope to upstage the Black Stars.

"Ghana are a strong team and they could win this tournament. Nigeria and the Ivory Coast are also a threat, but I'll bet on Ghana," the 27-year-old said.

"But I hope we play well against them and surprise them."

'Better motivated'
Meanwhile Niger hope their fortunes change at the Africa Cup of Nations on Sunday as they aim to end a losing streak in the competition when they face Mali at Nelson Mandela Bay Stadium.

This will be the Menas' (Gazelles) second appearance at the tournament after they made their debut in Gabon last year and lost all three group games.

Goalkeeper Daouda Kassaly has promised that the experience gained in defeats by co-hosts Gabon, and Tunisia and Morocco would stand Niger in good stead in South Africa.

"Playing in 2012 has been positive and (the lessons) will be put to (good use) in South Africa.

"The objective of the entire team is different to last year," said Kassaly, who plays for South African Premiership club Chippa United.

"We will fight to qualify for the next round as we are better motivated now, and backed by the entire country.

"It's an extra motivation for me after reading that Chippa United supporters will travel to Port Elizabeth to support Niger."

Niger can no longer be taken lightly after they eliminated Guinea in the final qualifying round for South Africa.

They turned the table on more illustrious neighbours by winning 2-0 in Niamey after losing the first leg by the odd goal in Conakry.

Niger will be further encouraged by results in their build-up for the championship, beating Togo 3-1 at home and holding Burkina Faso to a goalless draw in South Africa.

Mali, on the other hand, have proved they cannot be dismissed after they went as far as the semi-finals last year with a youthful team before bowing to the Ivory Coast.

Seydou Keita carried the team on his experienced shoulders in Gabon and will be expected to do same again, especially with ex-skipper and centre-back Cedric Kante unavailable and Fulham midfielder Mahamadou Diarra ruled out by a knee injury.

"I still have a lot to offer and so will aim to steer my team as far as possible at the tournament," said the former Barcelona 'super sub'.

The Eagles are ranked number three by FIFA in Africa behind the Côte d'Ivoire and Algeria. – Sapa-AFP.

Follow the M&G's live blog Afcon 2013: Inside the Stadium to catch all the action from the continent's biggest soccer tournament.