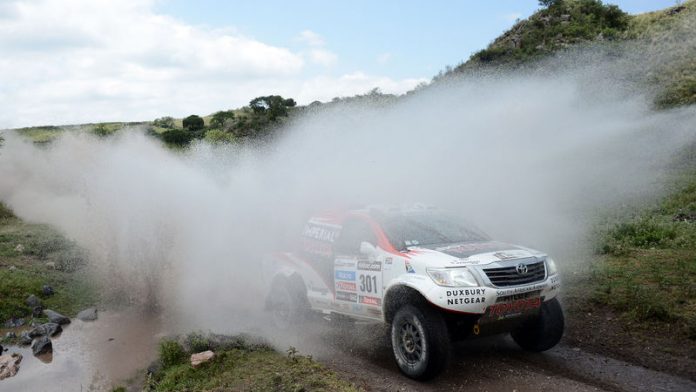 He took second overall after the 14th and final stage of this year's event in Chile on Saturday.

While they closed the gap on the French pairing of Stephane Peterhansel and Jean Paul Cottret by another couple of minutes, they finished the race 42 minutes, 22 seconds behind the defending champions.

De Villiers and Von Zitzewitz, who won the T1.1 class for the second year in succession, were 46 minutes clear of third-placed Russians Leonid Novitskiy and Konstantin Zhiltsov in the overall standings.

"This was a mighty performance by Giniel and our honourary South African, Dirk, and also by every single member of our technical and support crew, whose dedication and commitment contributed massively to this proud achievement," said team principal Glyn Hall. "I am privileged to be manager of this fine team."

De Villiers, who finished outside the top ten in only one of the 14 stages, moved into second position after Sunday's rest day, and held his place for the last six legs of the gruelling race.

Meanwhile, Sarel van Biljon, the only South African to win a stage of this year's race, in the quads division, bagged his third stage victory on the final leg to finish 21st overall.

Having struggled on the ninth stage, Van Biljon lost his podium place and tumbled down the standings, soldiering on in the second half of the event and eventually finishing more than 15 hours behind Argentinean winner Marcos Patronelli.

In the bikes section, which was won by Frenchman Cyril Despres, Riaan van Niekerk was the best of the South Africans, taking 13th overall after completing the final stage in 22nd position.

Van Niekerk moved into the top 20 on the fourth leg and finished strongly. Darryl Curtis, on the other hand, had a fantastic start, lying seventh overall after two legs, but he struggled in the latter stages of the race and slipped back.

Curtis was a lowly 60th in the final stage, taking 32nd position overall.

Brett Cummings, who had a disastrous start, lying outside the top 100 after the first stage, fought back in the second half of the event. While he played catch-up for most of the race, Cummings did well to finish 43rd in the standings after crossing the line in 28th place in the final stage. – Sapa

Giniel de Villiers has climbed to second in the Dakar Rally as South Africa's participation was cut back further with another withdrawal.
Read more
Sport

Argentine motorcycle rider Jorge Martinez Boero was killed when he crashed early in the first stage of the Dakar Rally in Argentina on Sunday.
Read more
Sport

A cavalcade of cars, motorbikes, quads and trucks set off from Mar del Plata on Sunday for the 33rd edition of the Dakar Rally.
Read more
Advertising
Continue to the category
Politics