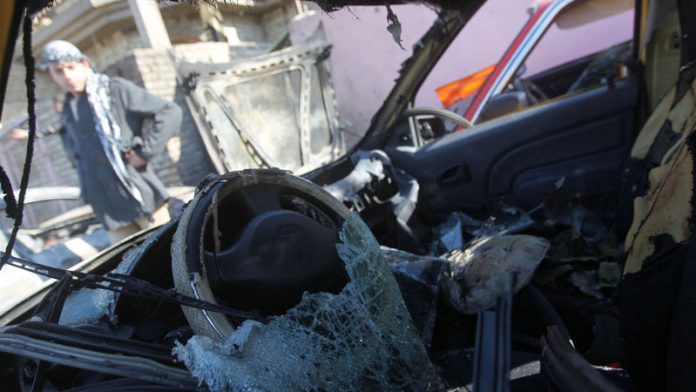 Although there was no immediate claim of responsibility, blame is likely to fall on Sunni insurgents such as al-Qaeda's local franchise. The group often uses indiscriminate car bombs to sow fear among Iraq's Shiite majority and undermine the government's authority.

The killing began on Tuesday morning when a parked car exploded in Mahmoudiya, about 30 kilometers south of the Iraqi capital, targeting a security checkpoint there. The explosion killed five, including two soldiers who were manning the checkpoint, and wounded 15 people, according to police.

Then, a suicide car bomb struck near a checkpoint in the northern Baghdad suburb of Taji, killing seven people and wounding 26.

A teacher who witnessed the attack, Nasseer Rahman (35), said he was sitting in a minibus waiting to pass the checkpoint when the attack happened about 120 metres  away.

"The useless checkpoint was the reason for the high casualties because dozens of cars were backed up in long lines before the checkpoint that got hit," he said. "As soon as the blast struck, we got off the minibus and ran to the site of the explosion. We saw several cars on fire and pools of blood, and everybody was screaming for help."

Frequent lethal attacks
Later, another parked car loaded with explosives detonated in the northwestern Baghdad neighbourhood of Shula, killing five and wounding 15, according to police.

Medics in a nearby hospital confirmed the casualties. All officials spoke on condition of anonymity because they were not authorised to speak to the media.

Incidents of violence have fallen since the peak of the insurgency in Iraq several years ago, but lethal attacks still occur frequently.

The new violence comes amid rising ethnic and sectarian tension following the arrest last month of bodyguards assigned to the Sunni Finance Minister Rafia al-Issawi. Rallies have swept the Sunni-dominated Anbar province, and other parts of the country where Iraq's minority Sunnis live, to protest alleged discrimination by the Shiite-led government.

An al-Qaeda affiliate, the Islamic State of Iraq, recently claimed responsibility for a number of unspecified attacks, as well as last week's assassination of a Sunni parliamentarian who played a leading role in the fight against the militant group. – Sapa-AP