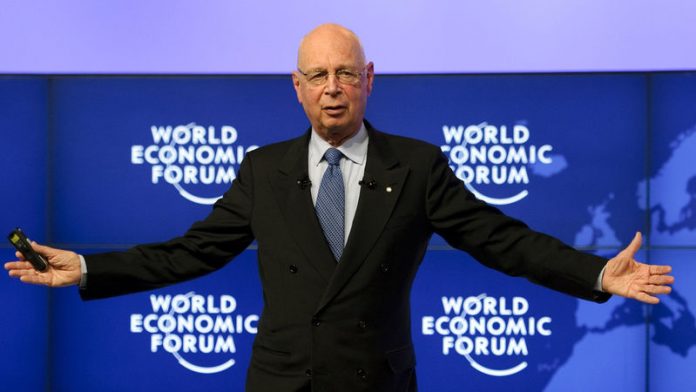 "Last year we were all caught in a crisis mood," he said. "I think it's time to look at the future in a much more constructive way again."

Schwab can see bright spots everywhere, not least in the progress made since last year's forum, when talk of the "collapse of the Euro and the end of Europe" dominated proceedings. As he reminds me, "it hasn't happened".

He has a point – much of the world outside the US and European Union (EU) is growing nicely; and the economic risks that do exist look transatlantic – again.

Davos can become a self-perpetuating moan about the world's woes, and why they are so difficult to put right. An intense week of discussing US fiscal pain, European debt, Third World hunger, poverty and global climate change would have anyone running for the hills weeping.

Schwab urges a more upbeat outlook: "We have certain signs of economic recovery, we have to structure our future in a more positive way."

In Davos-speak, he wants us to be "more dynamic".  But with EU unemployment at over 11% and rising, widening inequality and social division, and political gridlock in Washington, it's a difficult perspective to share.

I guess what Schwab is saying is that, while serious problems need to be confronted, we would do better to tackle them from a position of "glass half full", rather than the traditional journalists' view of "nothing in the bloody glass at all".

For CNN's full coverage of Davos go to www.cnn.com/davos. Quest Means Business airs every Monday to Friday on CNN International, Channel 401 on DSTV, at 21:00.

As African governments tackle the coronavirus crisis, there is a parallel focus on the future and what an economic recovery will look like
Read more
Education

With artificial intelligence taking over background tasks in the financial services sector, graduates need to be equipped with modern skills and mindsets to complement the machines and maximise benefits for consumers and the economy
Read more
Africa

If we increase the number of high-growth, women-founded startups, they can bridge the inclusivity gaps in their respective economies and societies
Read more
Advertising
Continue to the category
Education