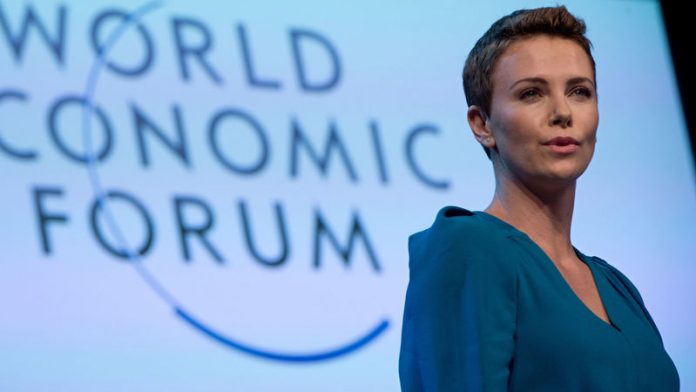 "We are proud of our Charlize," Zuma said about Theron's award for her humanitarian work.

"She has succeeded in an extremely competitive environment, and is a visible and hardworking ambassador for her country."

The programmes include mobile health services in an impoverished region of South Africa.

Zuma said he met Theron on the sidelines of the conference in Switzerland on Wednesday, and she briefed him on her work.

"I assured her that South Africans love her and wish her all the best," he said. "We wish her success in every venture she undertakes."

The award was presented to her on Tuesday night.

Last year, the award went to South African singer Yvonne Chaka Chaka, who was recognised for "using her art to improve the state of the world".

'Poverty, unemployment and inequality'
While in Switzerland – at the World Economic Forum in Davos – Zuma on Wednesday said that no one can say they are uncertain about the direction that South Africa is taking.

"Together as business, government, labour and the community sector, we must tackle our three fierce enemies: poverty, unemployment and inequality," he said.

He said the ANC's 53rd national conference in Mangaung had adopted the national development plan, which played a role in determining the country's policy direction.

"The conference has thus set the tone and provided the line of march, not only for the next five years, but until 2030."

He said the conference resolved to achieve socio-economic freedom.

"We have achieved a comprehensive political freedom and stability and consolidated our constitutional democracy."

South Africa was a country of many opportunities, and was a destination of choice for investors.

'Proving Afro-pessimists wrong'
Speaking on one of the findings of the Census 2011 report, Zuma said income distribution and growth was still racially skewed in favour of "white compatriots".

"This is a cause for concern for all of us. It compels us to work together with all our social partners to attack head-on the triple challenges," he said.

Zuma said infrastructure development was a flagship project, given its capacity to create jobs.

"Domestically there are roads, dams, power stations, schools, hospitals and more that are being built or refurbished. All these provide enormous opportunities for the business sector."

He told delegates that South Africa was stable, friendly, resilient and able to solve its problems.

"That is the type of country and society that we are presenting to the world," he said.

"We are presenting a South Africa that is open for business and which is open to provide entry into the African continent, a fast-growing region which is proving many Afro-pessimists wrong." – Sapa

Mahumapelo suspended for sowing division as ANC cracks down