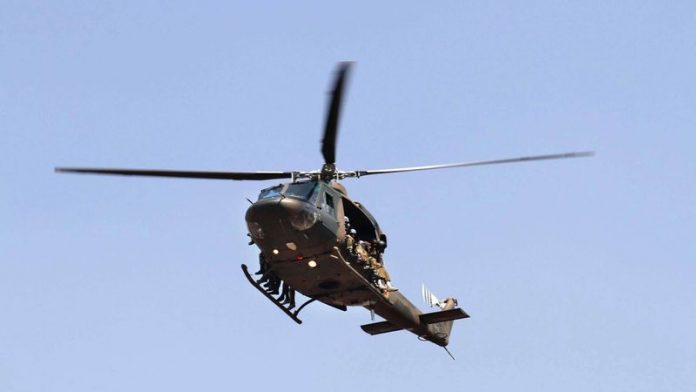 The South African National Defence Force is about to send a gift of helicopters and spares to the Zimbabwe Defence Forces (ZDF), raising the spectre they will be used in a military-backed campaign to put President Robert Mugabe and his Zanu-PF party back in power in polls expected this year.

The Mail & Guardian has seen confidential minutes of a meeting held in Cape Town two months ago between defence chiefs of the two countries. Under the heading "disposal of Alouette III helicopters and spares", the minutes note that "the administrative processes in the [South African National Defence Force] have been finalised and the equipment will soon be handed over to the ZDF". The department of defence confirmed shortly before going to press that "all processes for the disposal have been completed and the airframes and spares are ready for dispatch to that country as a donation".

Zimbabwe is scheduled to hold elections by the end of March, although they are expected to be delayed for months. Apprehension is building among civil society and in Prime Minister Morgan Tsvangirai's Movement for Democratic Change (MDC) that the military will step in, as it did during the violent 2008 presidential run-off, to save Mugabe.

The aged but versatile Alouette III, operated by the military in both countries since the 1960s, would be a force multiplier for the ZDF, providing fast access to rural areas.

Zimbabwe is under European and United States weapons sanctions, which have hampered the efforts of its air force to keep its handful of Alouette III and Agusta-Bell light utility helicopters in the air.

Military meddling
​The ZDF notoriously stepped in to help to secure a win for Mugabe in the 2008 presidential run-off after the MDC beat Zanu-PF in parliamentary elections. Operation waVhotera Papi (For whom did you vote?) reportedly involved a systematic and brutal crackdown on MDC supporters.

The ZDF chief, General Constantine Chiwenga, openly backs Zanu-PF. He is alleged in media reports and by the MDC to be preparing a campaign to support Zanu-PF's election efforts and to have undermined the current unity government.

The minutes seen by the M&G appear to reflect the ZDF's disdain for the power-sharing arrangement. In a "situation brief", the Zimbabwean delegation was quoted as reporting: "The smooth governing of the country remained untenable owing to divergent political ideologies of the political parties in the inclusive government."

The minutes are of the defence committee of the seventh session of the South Africa-Zimbabwe joint permanent commission on defence and security, a standing bilateral body. Meeting at Cape Town's Mount Nelson Hotel between November 21 and 23, the committee was co-chaired by South African army chief Lieutenant General Vusi Masondo and his Zimbabwean counterpart, Lieutenant General Philip Valerio Sibanda.

Following allegations that his troops were campaigning for Zanu-PF in rural areas when elections were expected as far back as 2011, Sibanda was quoted in the state-owned Herald newspaper as saying: "We have troops in various parts of the country doing training and … assisting various government departments like health and agriculture. It is unfortunate that we have some people who think that when they see army officers in a particular area … they are undertaking political activities."

Acquisition spree
More recently, allegations surfaced of the military going on a vehicle-shopping spree in anticipation of the elections. The Zimbabwe Independent reported in November that the ZDF is buying about 1 000 Isuzu bakkies, complementing Zanu-PF's acquisition of 550 cars "to ensure its officials and foot soldiers reach all corners of the country to mobilise voters".

These purchases underscore the importance of mobility if rural voters are to be corralled for Zanu-PF through military inducement or intimidation.

It could not be established this week whether the Alouettes and spares have already been handed over, nor the quantities involved.

The South African Air Force retired its fleet of Alouette IIIs between 2005 and 2007, when they were replaced by Agusta helicopters ordered in the controversial arms deal. The defence department said in 2008 that 17 Alouettes had been stripped of their guns and were for sale.

The Zimbabwe arms embargo is not binding on South Africa, as a 2008 United Nations Security Council attempt to replicate the European Union and US sanctions failed because of Chinese and Russian vetoes.

No permit
Exports of military hardware from South Africa have to be sanctioned by the National Conventional Arms Control Committee (NCACC), a Cabinet body chaired by Justice Minister Jeff Radebe.

But Radebe's spokesperson, Mthunzi Mhaga, deflected questions this week, saying the Alouettes and spares do not "fall within the NCACC's parameters of control".

The committee appears to be relying for this interpretation on the helicopters having been classified as "civilian" after their guns were stripped out – though both the transferor and the recipient are military.

Answers
The South African defence department on Thursday defended the donation, saying the it stemmed from "a decision that was taken by the former and first minister of defence, Mr Joe Modise, in 1997 when [the Alouettes] were being phased out. How the donation of the spares to the ZDF relate to the forthcoming elections in that country is difficult to understand.

"The SANDF would like to place it on record that it has a bilateral agreement with the Zimbabwe Defence Force and a number of exchanges in various fields between the two defence forces have taken place and will continue."

Zimbabwe army spokesperson Lieutenant Colonel Alphious Makotore asked for all questions to be physically presented to a Colonel Overson Mugwisi at Zimbabwe Defence House in Harare. For safety reasons, the M&G's Harare correspondent did not present the questions.

MDC spokesperson Douglas Mwonzora said on Thursday his party was aware of a plot to beef up the military ahead of the elections, in support of Mugabe's re-election bid. "There is no need to escalate expenditure on the military when there are far more important exercises that the country is concerned with, such as securing the $21 million needed for the voter registration exercise," he said.

"The military chiefs have already stated their objectives and who they will back for president. In our respectful view, the military is political and it is evident that they will neither respect the views of the people nor recognise an MDC victory in the coming election. That is why we are urging the Southern African Development Community and African Union to be thoroughly involved in Zimbabwe's political processes." – Additional reporting by M&G Harare correspondent

President Robert Mugabe describes the military as "the vanguard of our revolution", but critics say he is increasingly relying on the army to hold on to power.

Its leadership is dominated by struggle veterans, who are suspicious of Prime Minister Morgan Tsvangirai because of the Western backing he enjoys. Mugabe's opponents say the army's top brass only works with him to safeguard the wealth they have accumulated under his rule.

Fears are growing that the army will again play a major role in the coming elections. A joint committee set up to monitor the implementation of the unity agreement said earlier this month it had received formal complaints from the MDC about rural supporters being intimidated by army officers.

Dozens of army officers are standing for Zanu-PF in the elections, but it is unclear whether they intend stepping down from their posts if elected. Retired and serving officers already head several state enterprises.

Ahead of elections in 2002, generals said they would not allow anyone who did not fight in the liberation war to lead the country.

In 2009, General Constantine Chiwenga said the military would not welcome any change of government that "carries the label 'Made in London'", a reference to the MDC, which Zanu-PF accuses of being British-sponsored.

In 2011, Brigadier General Douglas Nyikayaramba said Tsvangirai was more, a "security threat than a political one", vowing to keep Mugabe in power for life. Nyikayaramba headed the Electoral Supervisory Commission in the 2002 elections.

In 2007, during "Operation Maguta" soldiers were sent into rural districts ostensibly to assist struggling resettled farmers. Critics said it was a ploy to justify the army’s presence in the countryside. — Jason Moyo