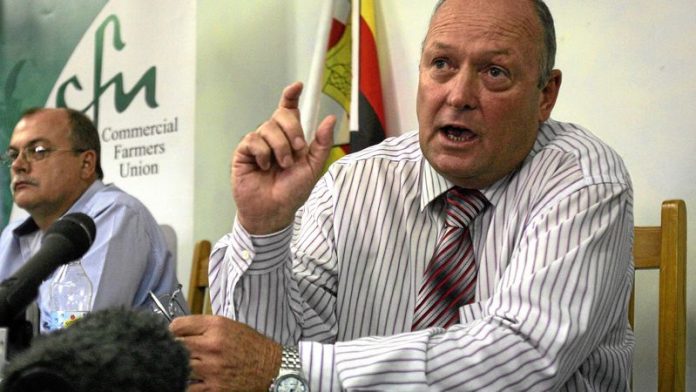 The proposal by the Commercial Farmers' Union (CFU) seeks the valuation of their former farms, followed by the issuance of bonds underwritten by an international financial institution.

The union's president, Charles Taffs, said that there had been broad consultations about the issue for the past two years, which had included the government, international finance institutions and the black farmers occupying the land. “We are re-establishing the value of what has been lost [and] we are monetising that value and placing it back into the economy,” he said.

But Taffs would not reveal the name of the institution that would underwrite the bonds. “If it [the proposal] was going to be engaged as a policy of government, we would be getting Bretton Woods institutions coming to the table,” he said.

But Finance Minister Tendai Biti said that compensation was a national issue and could not be restricted to a “clique of people”.

The issue of the white farmers, whether legitimate or not, Biti said, could not override inclusive national programmes.

“These are neoliberal solutions that look at one race, one sector of the economy. I have a problem with an elitist solution to things,” Biti said.

“What is required is a broad majority solution that creates a win solution.

“The whole country needs compensation. I know thousands of people whose homes were burnt by Zanu-PF. I know of many homes that were destroyed. The issue of compensation is a national issue which cannot be restricted to white people only.”

Taffs said the major concern was “the fear that we want to turn back the clock”. He said the CFU “knows that is not a reality and we don’t actually want that”.

“We want to go forward in a prag­matic manner … where every Zimbabwean has to be treated equally,” he said.

CFU's proposal
Lands, Land Reform and Resettlement Minister Herbert Murerwa said he had not yet received the proposal.

Under the CFU’s proposal, bonds would be issued and managed by a recognised accounting firm.

A land bank would be created to handle the more than 5 000 title deeds held by former farmers, which would be ceded to the bank. The bonds, which will be assigned a value, would be offered for sale to the current beneficiaries on the land.

The CFU believes its affected members would be able to reinvest in the economy and mentor the new beneficiaries and help to guarantee food security.

The land bank, the proposal says, will receive initial financing from donors and international finance institutions.

Litigation
Commercial farmers have sued the Zimbabwean government in South Africa and at the International Court for Settlement of Investment Disputes.

The Zimbabwean government’s international assets could go under the hammer to settle compensation arrears for other white farmers.

The CFU argues that such litigation could be halted if their proposal were to be adopted.

African Investment Markets’ Farayi Dyirakumunda said, for the CFU’s proposal to succeed, the underwriter would have to be known to instil market confidence in the initiative.

“The proposed bond will only work if there can be a reputable foreign underwriter because the local market will not have the capacity or appetite for such a transcation. On that basis, I do not see this materialising in the foreseeable future,” he said.

“It also remains unclear who the underwriter will be or the specific indentures and covenants that would make the bond attractive for both the issuer and holder.”