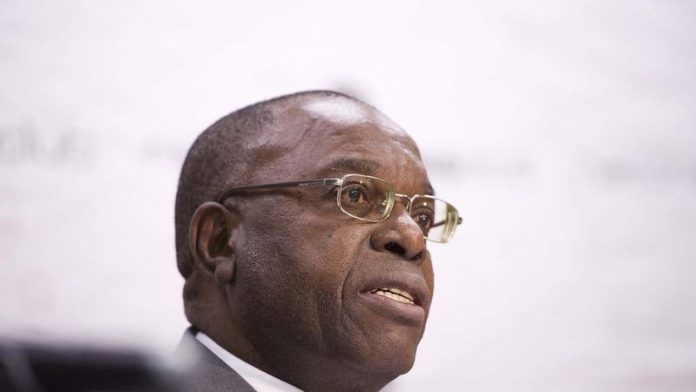 Agree to take a lie-detector test and I will take one too – this is the bald challenge of the former senior investigator of the arms deal commission, Mokgale Norman Moabi, to the commission chairperson, Judge Willie Seriti. Moabi's resignation letter sparked an outcry after he accused Seriti of having a secret "second agenda".

With a professional record as both a former president of the Law Society in the Northern Provinces and former acting judge in the North Gauteng High Court, Moabi has committed himself to taking a lie-detector test in a letter he addressed to Seriti this week. The Pretoria-based lawyer offered to be the first to take the test, if Seriti obliges.

The challenge comes in response to Seriti's attempt to rebutt allegations made by Moabi in an explosive resignation letter leaked to newspapers last week.

Moabi had complained of a "second agenda" at the commission that was frustrating efforts to uncover the truth about the 1999 arms deal.

Seriti denied he had any such agenda. He also accused Moabi of "making false allegations to deliberately tarnish the image and credibility of the commission" in his resignation letter, and said he must have a personal grudge against him.

A clearly unbowed Moabi has now also put the evidence leaders who are on brief to the commission on the spot. He has challenged all 10 of them, who in a memorandum put out by the commission this week came out in public support of Seriti and the commission, to take a lie-detector test too. Moabi would like them to explain "where, when and with whom" consultations and strategic planning sessions were held with the commission, as claimed in the memorandum.

Moabi also said he had no recollection about the evidence leaders being "actively and consistently encouraged to make contributions on how best the commission should achieve its mandate". He asked the evidence leaders: "Where and when did this happen and who did the encouragement?"

Second agenda
Although the evidence leaders have briefs to lead evidence before the commission, a legal source with experience of commissions of inquiry told the M&G it was unusual that they all continued to work in private practice. In most commissions, many of the evidence leaders are employed full-time and work together "to gather evidence, piece together the jigsaw together and to pursue potential witnesses".

Moabi's invitation to take a lie-detector test was also extended to the advocate Fanyana Moses Mdumbe, the head of legal research at the commission, who was mentioned but not named by Moabi in his resignation letter.

Part of the alleged "second agenda" Moabi describes in his three-page resignation letter involved strict instructions to evidence leaders to contact only "one person" in respect of any queries concerning the briefs or related matter.

It has been established that this person was Mdumbe. This was confirmed by Seriti in his statement issued this week.

The commission spokesperson, William Baloyi, said Mdumbe was a "competent and hardworking professional who has been leading the commission's investigations".

Although respected legal figures said it was highly unusual for an advocate to be briefing other advocates, including evidence leaders, the commission has no such reservations about Mdumbe's role. "He [Mdumbe] is best suited to prepare briefs for the evidence leaders and to provide them expeditiously with whatever information they may require. He is the most senior professional within the internal legal team," said Baloyi.

Among the serious claims Moabi made in his resignation letter were accusations of Seriti's "total obsession" over the control of the flow of information to and from the commission; the clandestine preparation of documents and briefs handed to the evidence leaders; and "unknown persons" who dictate what information goes into the briefs and which evidence leaders will deal with certain witnesses.

"Everything in your response that is contrary to the specific points I raised in my letter of resignation, I dispute."

Other matters that Seriti had referred to were "now insignificant" and could be dealt with later, if necessary, Moabi said in the letter.

"Again, like I have challenged the evidence leaders to submit themselves for public scrutiny by the South Africans through undergoing a lie-detector test, together with myself on my statements, the chairperson is similarly invited. I will be the first to take the lie-detector test, if you oblige," he wrote to Seriti.

Moabi said that Seriti had extensively referred to Mdumbe in his response to his resignation letter.

"I equally extend my challenge to him to disclose to the public under a lie-detector test how much work and consultations he did alone or with yourself to the exclusion of others on the second agenda. I have no grudge against anyone."

Public scrutiny would, in his view, resolve the veracity of the allegations and counterallegations, Moabi wrote.

Public scrutiny
"The light has shone on the second agenda and it is wobbly. South Africa deserves better," Moabi stated.

In his letter, Moabi addressed the evidence leaders, who include a number of esteemed advocates, including Tayob Aboobaker SC and Barry Skinner SC, and said he believed that they had shown an interest in the successful conclusion of the commission's mandate, which was naturally to be expected because they were "on brief".

However, Moabi said, he was prepared to say publicly that he did not, as a senior investigator in the commission, participate in any of the "consultations and strategic planning sessions that the commission held with you".

"I am prepared to undergo public scrutiny under a lie-detector test to prove my position. If you are prepared to equally do the same, then South Africa at large will have reason to understand where your confidence in the chairperson of the commission is coming from," Moabi wrote to the evidence leaders.

Good base
"Your past relationships with the chairperson, if any, prior to the institution of the commission, and your dealing with the commission lately, will be a good base to explore where you are coming from on your stance."

Seriti claimed this week that Moabi was not a senior investigator at the commission, where he worked for five months before dramatically quitting.

But Moabi told the M&G that he was described as a senior investigator on his payslip issued by the department of justice for his work at the commission.

Baloyi responded: "The commission objects to these kind of questions and regards them as insulting."