It is tempting to draw a straight line between the Constitutional Court's declaration of the election of Free State Premier Ace Magashule as provincial ANC chairperson unlawful and the Sasolburg conflagration this week, or to interpret it as yet another demonstration of the local-level legitimacy problem trailing in the wake of ANC factionalism and dysfunction.

The violence that rocked the streets of Zamdela township near Sasolburg in the Vaal Triangle was sparked by news of a proposed merger of the Metsimaholo (Sasolburg) and Ngwathe (Parys) municipalities. The "no to Parys" protest quickly focused its energies on the figure of Magashule, who has long been controversial. The dodgy ANC provincial conference is merely symptomatic of the kinds of unsavoury practices that have attached to Magashule during his rise to prominence in the Free State ANC over the course of the past decade. This hard-core Zuma backer, who hails from Parys, stands accused of the depressingly routine sins of the post-apartheid political malaise, such as purging his opponents within the ANC and dishing out tenders to associates and family. But it's not entirely clear what relationship intra-ANC politicking has to the violent events in Sasolburg.

The unrest of the past week has all the generic features of popular unrest everywhere: fuelled by genuine grievance and frustrated aspiration; boredom and opportunism; anti-police sentiment and the volatility of the crowd – not to mention looted liquor. Participants who took the trouble to speak to journalists have singled out Magashule because of his obvious illegitimacy, prominence and position, but the main grievance, at least on the surface, relates to demarcation.

In a sense, we have been here before. Khutsong township residents bitterly (and ultimately successfully) protested against their exclusion from Gauteng's provincial boundaries and incorporation into North West province in 2005 on the grounds that the quality of "service delivery" in the area would suffer. Khutsong residents showed keen appreciation of the comparative superiority of governance in Gauteng over North West. 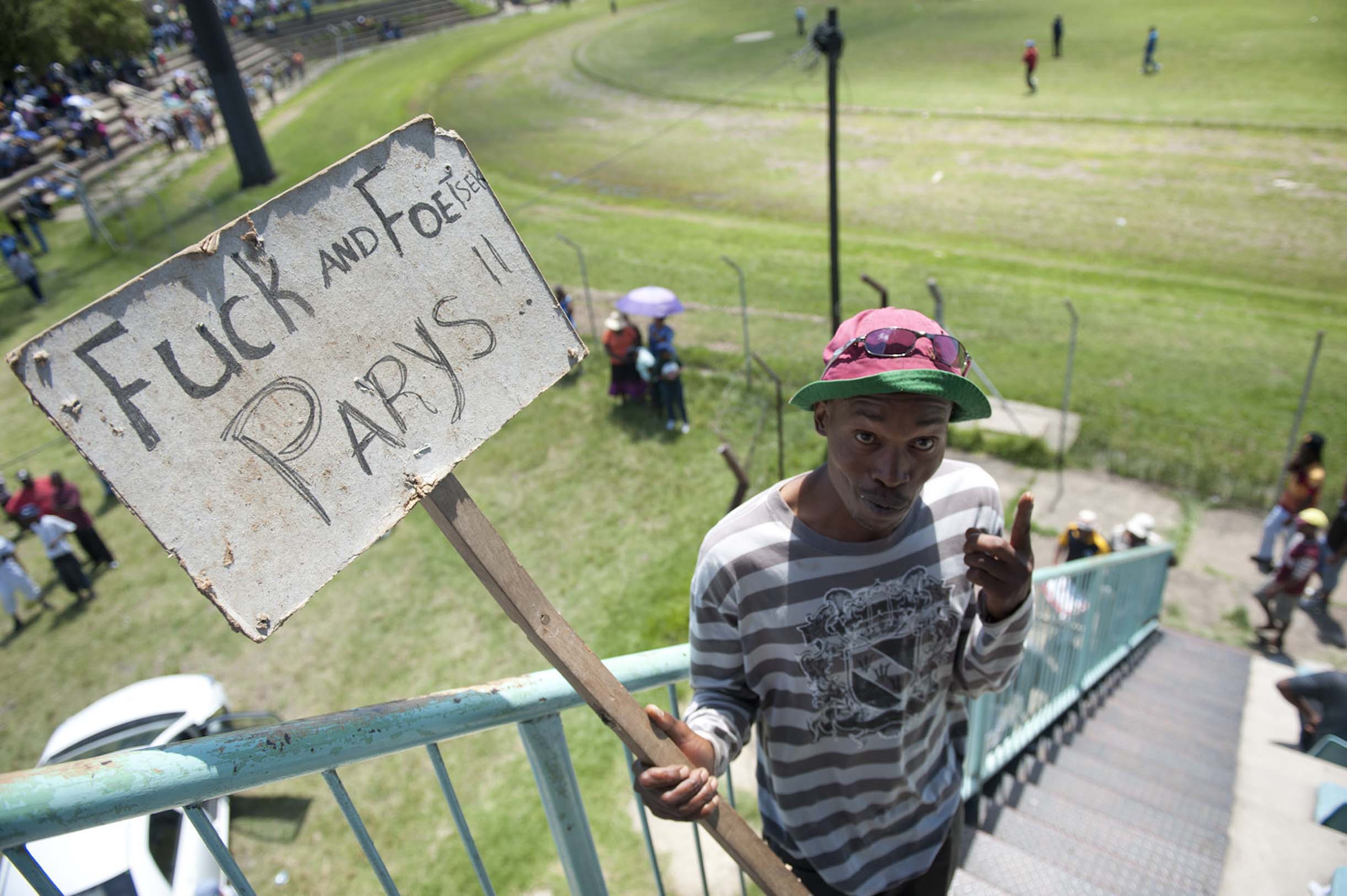 Protestors and police clash in the streets of Sasolburg’s Zamdela township this week. (Delwyn Verasamy, M&G)

Reports have claimed that Khutsong has been invoked by Zamdela protestors. Many similar dynamics appear to have been at work in Sasolburg this week.

Residents in the Vaal Triangle like all of us – are acutely attuned to the effects flows of financial resources from politically connected sources can have in everyday life, and they are deeply sceptical of regional political favouritism. Neighbouring townships are subject to developmental inventories: How many houses are being built in X township? Are roads being paved? Are parks being upgraded? Who is getting tenders? It is widely assumed that merit and procedure have little to do with the manner in which "service delivery" happens. Political connections to the ANC patronage machine provide explanations of sudden flows of financial resources. Some of this cynicism lies at the heart of the opposition to the merger of the municipalities.

Treacherous local councillors
Zamdela residents have had many grievances with their own local municipality and its politicians and officials: there have been sit-ins at municipal offices and protests and arrests before. Residents who are cut off from the flow of local ANC patronage in Sasolburg and Zamdela remark bitterly (but also perhaps a little enviously) about corruption, about the rows of luxury German vehicles parked in the underground garage of the municipal building in Sasolburg, about treacherous local councillors who leave the township for the upper-middle-class suburb Vaal Park or Sasolburg itself, and – in the case of younger men – there are complaints of councillors "stealing" the township's most beautiful women.

Whatever the sins of Metsimaholo municipality, protestors are evidently intent on signalling their refusal to allow the merger with Ngwathe. Sasolburg, for all its reputation in middle-class circles as a small provincial dorp crossed with Mordor, has long been perceived by poor and working-class migrants (men and women) from across Southern Africa as something of a regional centre of opportunity, a less daunting prospect than the Witwatersrand conurbation to its north. This has a lot to do with the intensity of industry that clustered around Sasol's original factory over the course of the second half of the past century. Sasol's presence is one that Zamdela's residents – for all their ambivalence, even animus, towards the company belching pollution on their doorsteps – are reluctant to relinquish or share with another municipality. 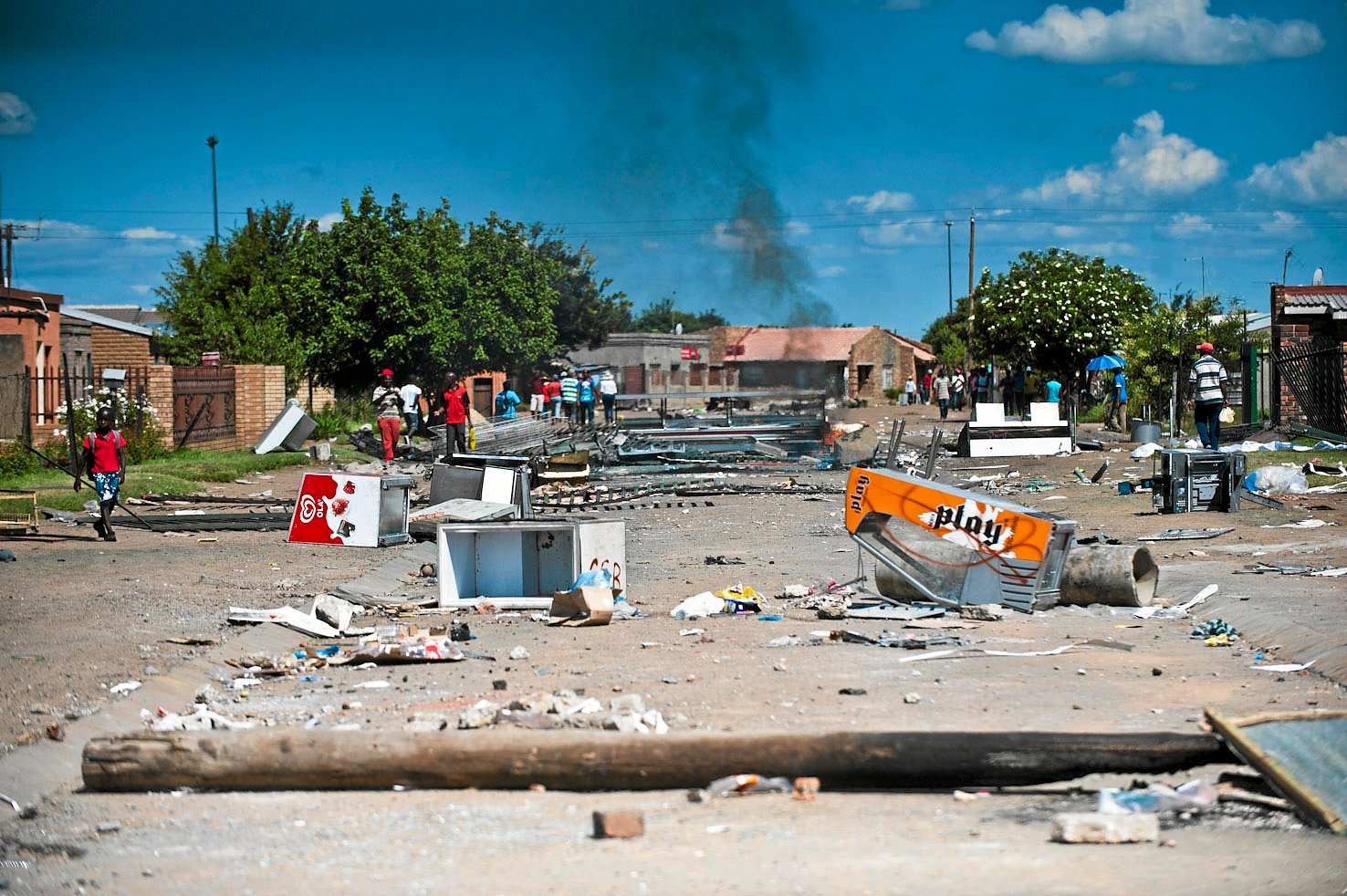 A proposed merger with the Metsimaholo (Parys) municipality is at the root of the anger. (Delwyn Verasamy, M&G)

How did we get here? Sasolburg was set up shortly after the establishment in 1950 of Sasol, the Industrial Development Corporation's autarkic project for converting coal into oil. Sasol commissioned Swiss émigré architect Marx Kirchhofer to plan both the town housing white employees, families and managers (Sasolburg proper) and its attached black township, Zamdela.

Kirchhofer never quibbled with the fact of racial segregation, but insisted that the township, like Sasolburg with its interconnected green belts, was designed to encourage salubrious family living to soften the edges of industrial modernity. In the mid-1960s Kirchhofer wrote critically of the "mass housing of men, devoid of privacy, rife with pilfering and incapable of fulfilling the most modest human endeavours". In reality his plans had to conform to the notoriously inflexible stipulations of Hendrik Verwoerd's native affairs department.

Yet oral histories from older Zamdela residents are often jarringly nostalgic for a time when (for all the indignities and brutalities of apartheid and this town) many of the financial costs of everyday life were subsidised by Sasol through the provision of food, fuel and accommodation, which in reality substituted for higher wages.

These and other paternalistic practices did not survive long into the second half of the 20th century. However, for much of the 1950s and 1960s, Sasol worked to defend its company town prerogatives from Verwoerd's insistence that it house workers in a larger generic "native township", in ways not entirely dissimilar from the efforts of Zamdela residents today to prevent incorporation into Ngwathe municipality.

Sasol's migrant labourers employed the intensely paternalistic culture of the company's compounds to encapsulate themselves in "homeboy" networks designed to ensure the continuity of their commitment to rural life-projects; Zamdela's aspirant black middle class (emerging from the ranks of Sasol's black office clerks) enrolled both the company and local white officials in their efforts towards forging a respectable community and, later, prosperous local businesses.

Recruiting patterns
Ultimately, shifting recruiting patterns and unionisation in the mining industry and broader cultural changes associated with deepening levels of commodification and more assertive forms of black politics undermined the bases of paternalism in Sasolburg. In the late 1970s, Sasol discontinued its long-standing practice of giving Christmas gifts to its black employees.

In the mid-1980s, after an interregnum during which it subsidised the first private house ownership by black employees in Zamdela, the company renounced any further subsidisation of employee living costs, moving to free up capital as it repositioned itself for a new age of global expansion. Paternalism was now tainted by its association with white supremacy and, having been central to Sasol's employment practices for decades, was now considered bad business.

The end of influx control and apartheid saw phenomenal growth of informal settlements on Zamdela's periphery. Sustained demographic growth bequeathed this company town (like the rest of South Africa) with a massive "surplus" population with little prospect of formal employment. 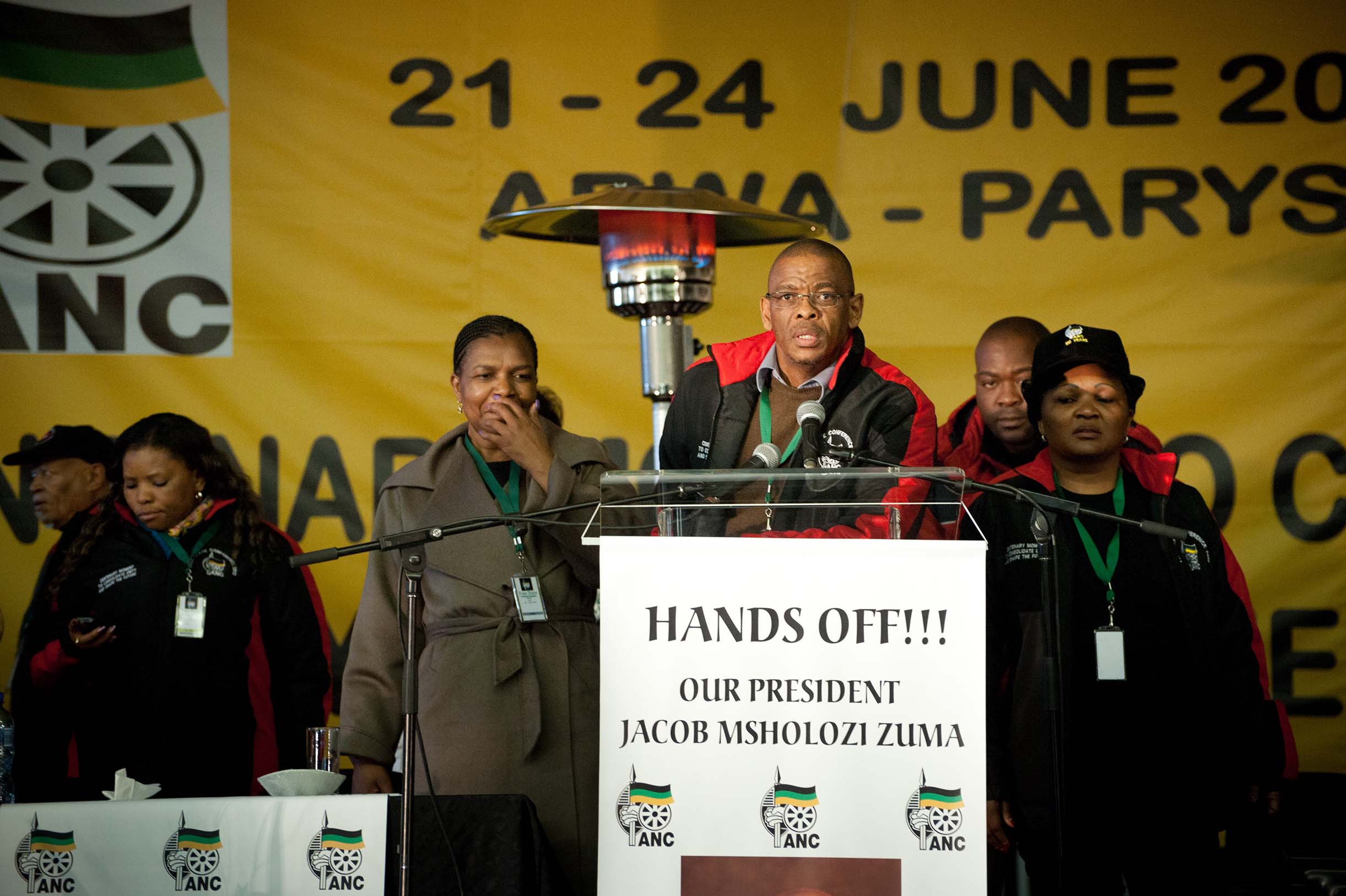 Though the ANC has dominated the local council in Sasolburg since the end of apartheid and the company long ago moved its headquarters to Rosebank, Sasol still looms large in the town, perhaps most importantly as a symbol upon which to make pressing political claims. Zamdela residents complain that company jobs do not go to needy and qualified township residents.

A great many community development and other civic initiatives have sprung up in the shadows of Sasol's factories, demanding financial support from the company through the submission of repeated funding proposals. Many of these are shoestring organisations, and performance groups are particularly common, the aspirational entrepreneurial intent of their members reflected in their names (Success Kingdom for Freedom is one of my favourites). The members of these organisations are impatient, demanding their pound of Sasol's flesh, which they feel they and their community are owed. "We live here, Sasol dumps its pollution on us every day, and it doesn't give us jobs; they must support us," they insist.

Whether through rates, a long-standing subsidy granted to the local municipality or philanthropy, Sasol still contributes a not insignificant, but significantly reduced, amount of money to the town's coffers. Many young Zamdela residents are claiming that the municipal merger was designed for Ngwathe to get its hands on Sasol's annual municipal subsidy, on Sasol jobs, on what little is left of its largesse. Its politicians (with Magashule behind them) and even Parys's allegedly envious residents want their turn to "eat" at Sasol's trough.

Patrimonial and favouritism
It is popularly assumed in Zamdela that the new merged municipality would be headquartered in Parys because of the town's ties to Magashule. They believe they cannot possibly be governed advantageously at a distance, particularly from Magashule's hometown, a politician who has plainly made patrimonial and favouritism his business; where the local municipality is said to be staffed by his cronies alone.

This is not an entirely innocent critique: it comes partly from a suspicion that patrimonial politics, with its favouritisms running along the tributaries of kinship and place might be an unavoidable characteristic of politics. 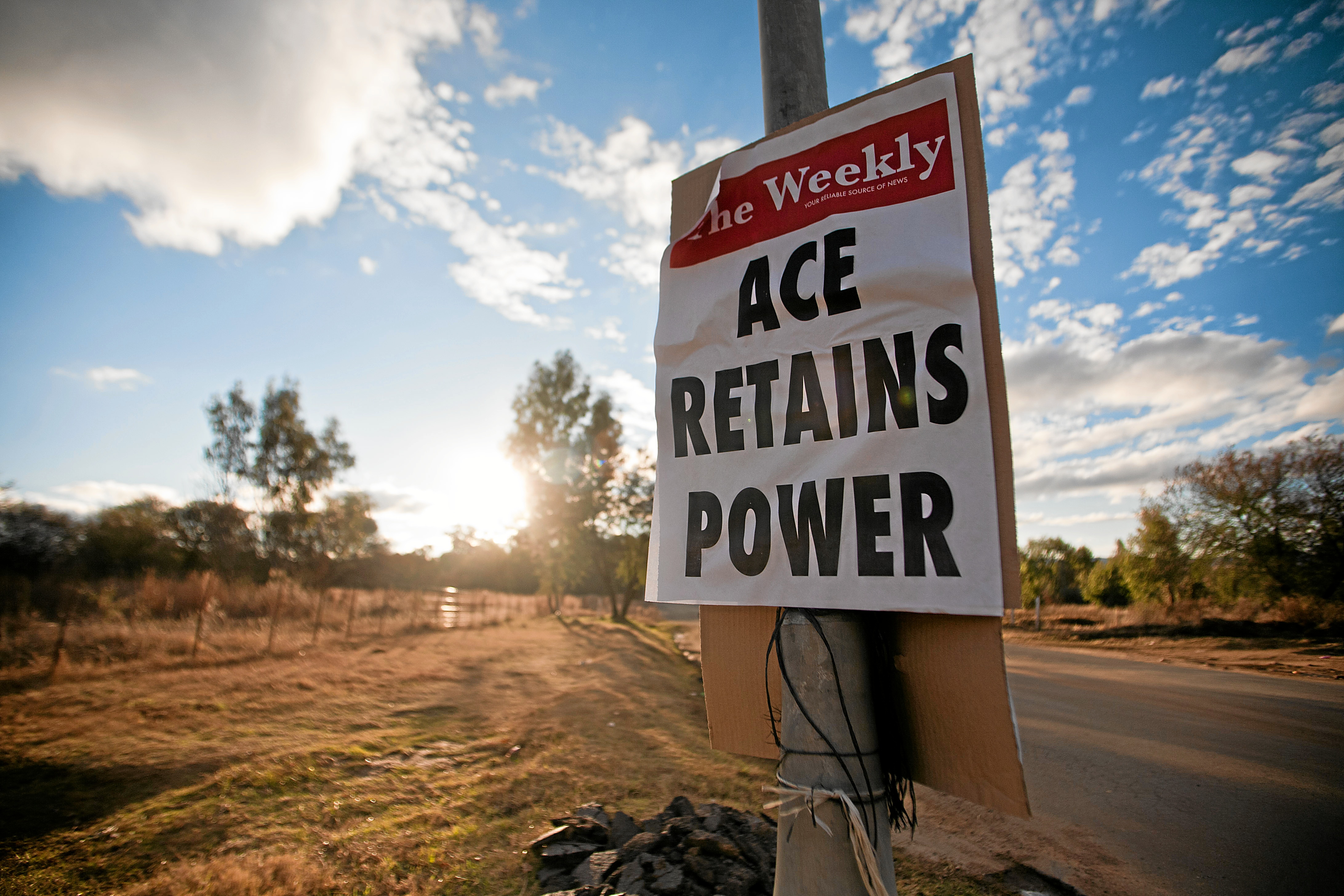 In another sense, through rejecting the merger Zamdela's residents are accurately identifying where their best interests lie. As their own sit-ins in Metsimaholo's municipal offices attest, Sasolburg has not been unaffected by the myriad problems haunting governance in the post-apartheid period. But the Ngwathe municipality is notorious in the region for its corruption and maladministration.

In 2010 Eskom threatened to cut off Parys's electricity supply because of massive outstanding payments owed to it by the municipality; it is still in debt to the tune of more than R100-million, as many Zamdela residents point out in almost rote fashion.

Sasol's presence in Sasolburg leads to the conclusion that, in fact, Metsimaholo is a comparatively wealthy municipality and merging with Ngwathe and taking on its debt could only lead to greater local ruin than is already being experienced. Better the devil you know.

The republic of Sasol(burg) is a thing of the past. Sasol has long since divested itself of serious commitment to subsidising the costs of reproducing life in Zamdela and Sasolburg beyond fairly standard corporate social responsibility initiates. The largesse many of Zamdela's young residents seek is largely chimerical. Zamdela's youth need to be convinced of the possibility of a future free of the bitter legacies of paternalism and patrimonialism.