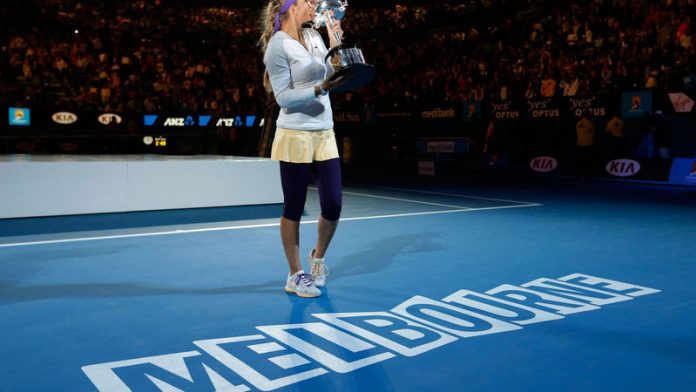 Victoria Azarenka overcame an often hostile crowd to win back-to-back Australian Open titles, beating Li Na 4-6, 6-4, 6-3 in a dramatic final on Saturday that contained a break for fireworks, two medical timeouts and a nasty fall to the court by Li.

The Chinese star first tumbled to the court after twisting her left ankle, and had it taped after falling in the fifth game of the second set.

On the first point after a 10-minute pause in the third set while fireworks boomed overhead from nearby Australia Day celebrations, Li fell over again and slammed the back of her head into the court.

The 2011 French Open champion was treated immediately and had another time out before being allowed to resume the match.

Azarenka, who broke down in tears and sobbed into her towel when the match ended, won five of the next six games to claim her second major title and retain the No. 1 ranking.

“Unfortunately, you have to go through some rough patches to achieve great things. That’s what makes it so special for me,” she said. “I went through that, and I’m still able to kiss that beautiful trophy.”

The win meant that Azarenka will maintain top spot and Serena Williams, who lost in the quarterfinals, will become the new No. 2 in the rankings.

On a crisp Saturday night, Azarenka won the coin toss and elected to receive, a ploy that seemed to work when a nervous Li was broken to start the match. After a double fault on the first point, Li’s forehand long gave Azarenka the early lead.

The capacity crowd at Rod Laver Arena was firmly behind Li, cheering loudly when she was introduced. Azarenka, meanwhile, had her errors applauded, and one spectator even mocked the loud hooting sound she makes when she hits a shot.

The chill from the crowd was a remnant of Azarenka’s semifinal win over American teenager Sloane Stephens, when Azeranka was criticised for taking a questionable 10-minute medical time out near the end of the match.

She was accused of taking the time out to compose herself after she’d wasted five match points while serving for the match against Stephens, although Azarenka said she needed the time out because a rib injury was making it difficult for her to breathe.

In the second set, a few fans heckled Azarenka over the incident. One man yelled, “Take a deep breath, Vicky.”

By the end of the match, she appeared to have won some of the fans back. Azarenka’s friend, rapper Redfoo, yelled down to her from the player box “You deserve it,” and she later blew kisses to the crowd.

Someone else in the crowd shouted “Victoria, we love you.”

Azarekna appeared to quickly forgive the crowd, saying during the trophy presentations that she wanted to thank the fans for their support.

“I will always keep very special memories of this court and it will be in my heart forever,” she said, pausing several times to find the right words.

“Of course, I (almost) forgot to say congratulations to Li Na, she’s had a terrific start to the year … hope to see you in many, many more finals.”

Azarenka and Li had met twice before in Grand Slam tournaments, with Li winning both times – in the fourth round of the 2011 Australian Open and quarterfinals at the French Open.

But after failing to advance past the fourth round at any major in 2012, Li hired Carlos Rodriguez, Justine Henin’s former coach. The hard training he’s put her through in the past four months appears to be paying dividend.

Li won a WTA tournament in China before travelling to Australia, where she advanced to the semifinals at the Sydney International.

In the men’s final on Sunday night, Novak Djokovic attempts to win his third consecutive Australian Open against US Open champion Andy Murray. Djokovic has had the benefit of an extra day off after an easy three-set win over David Ferrer on Thursday night, while Murray needed a tough five-setter to defeat Roger Federer.

Murray has predicted a tough match with long rallies against Djokovic, the player he beat in the final at Flushing Meadows in September.

“I’m ready for the pain,” he said. I hope it’s a painful match, that will mean it will be a good one.”

In the other final Sunday to end the year’s first Grand Slam, the unseeded pairs of Jarmila Gajdosova and Matthew Ebden of Australia and the Czech Republic’s Lucie Hradecka and Frantisek Cermak play for the mixed doubles championship. – Sapa-AP.