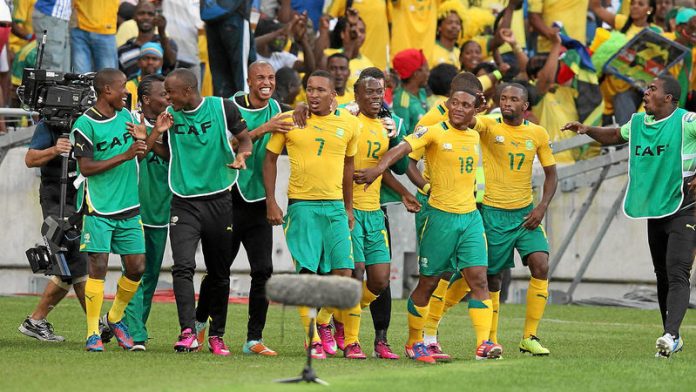 “The stressful part was the group stages and getting through now has sort of eased that tension a bit,” Parker said.

“Now that we're into the knockout stages anything is possible.

“We can make even better things possible for ourselves by building on the performances of tonight [Sunday] and the match before this. I'm sure we'll get stronger.”

South Africa qualified for the quarterfinals as Group A winners on Sunday after a nerve-wracking 2-2 draw with Morocco when they twice had to come from behind to earn the point that allowed them to progress.

It rounded off a successful first round, which began with criticism and a loss of faith from the nation after a lacklustre goalless draw against Cape Verde Islands last Sunday.

They followed that up with a commanding 2-0 win over Angola, before closing with another draw.

Home support
Parker, who started all three games so far, said going all the way to the final was now “definitely a possibility” as Gordon Igesund's men start to reap the rewards of the much talked about momentum and home support.

“It was our main aim to get through the group stage and we're delighted to have done that," Parker said.

"We showed a lot of character, we fought, we never gave up and that shows we're a team.

“We're together as a unit and we hope to take this spirit into the next game and all the way through to the final. I know we can make it.”

On Sunday, the capacity 50 000 crowd played a key role once more in lifting them.

“The crowd played their part brilliantly,” he said.

“The Mexican wave, you could feel it, they were giving us the energy to put in the extra effort, which was great."

Bafana's fight
Defender Issam El Adoua and substitute midfielder Abdelilah Hafidi had put the Atlas Lions, who needed to win to progress, in the lead in the 10th and 82nd minutes respectively.

Each time Bafana fought back thanks to fine goals by midfielder May Mahlangu and defender Siyabonga Sangweni, who netted his second goal of the finals with under three minutes remaining.

There was also a stand-out showing from man-of-the-match and Parker's team-mate at Kaizer Chiefs, Itumeleng Khune – the goalkeeper atoning for his fault in the first Morocco goal by thwarting the visitors on several occasions.

“He's an experienced player and to be honest, I haven't seen any goalkeeper like him," Parker said.

“I've played in Europe and even there I've not seen anyone with distribution like he has.

“He has such a heart and he's never afraid to come off his line and help out in the defence as well. It's fantastic and he was important tonight.” – Sapa