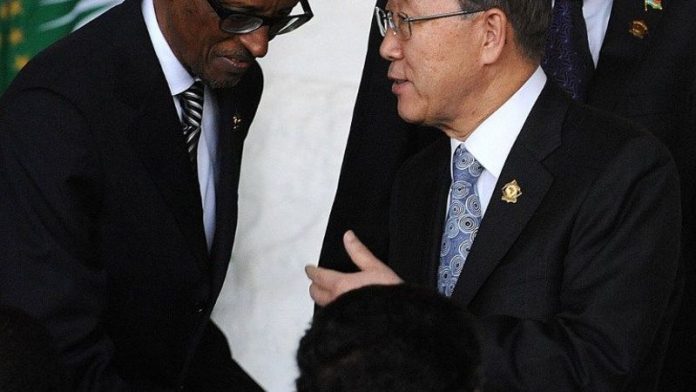 But a signing ceremony for the deal – the details of which have not been made public – was cancelled on Monday morning just 30 minutes before it was due to take place. "This is a very complex issue, talks are still continuing," said Eri Kaneko, a spokesperson for Ban, without giving further details.

The presidents of Rwanda and Uganda – which UN experts have accused of backing the M23, a charge both governments deny – as well as DRC, Angola, Burundi, DRC, South Africa and Tanzania had been expected to sign the deal.

Rwandan President Paul Kagame and his Ugandan counterpart Yoweri Museveni both refused to comment on the proposed deal, holding a discreet meeting on Monday on the sidelines of the African Union (AU) summit.

Ban urged regional leaders at the opening of the AU summit on Sunday to "endorse a Peace Security and Cooperation Framework to address the structural causes of the recurring cycles of violence" in the region.

Mali response criticised
The latest cycle of unrest in eastern DRC erupted last year. The rebels seized the key eastern city of Goma in November before pulling out 12 days later. Peace talks have been held in Uganda, but have so far made little headway.

Other discussions at the AU summit – the second and final day of the 54-member bloc's bi-annual meeting – focused on Mali, including the scaling-up of African troops to help the Malian army battle Islamist militants who seized the country's vast desert north in April last year.

On Sunday, outgoing AU chairperson Thomas Boni Yayi, the president of Benin, told fellow leaders their response to conflict in Mali had been too slow, and thanked France, the country's former colonial ruler, for taking the lead in its military intervention there.

France's action, launched on January 11 after extremists seized a central town and threatened to advance on the capital, was something "we should have done a long time ago to defend a member country", he said, asking how it was "that Africa, despite having the means to defend itself, continued to wait".

He appealed for "further commitment … for the financing of all the forces". The UN chief also told the summit he was "determined to do everything to help the people of Mali", but urged the government to ensure "an inclusive political process".

After the summit, African leaders are expected to stay behind for a donor conference on Tuesday to drum up support for the African-led International Support Mission to Mali.

Bloody clashes
On Friday, the AU security council gave member states one week to commit troops to the force. Tensions between Sudan and newly-independent South Sudan and efforts to build peace in chronically unstable Somalia have also been discussed at the summit.

South Sudan's President Salva Kiir and his northern counterpart Omar al-Bashir met again on Sunday after face-to-face talks on Friday ahead of the summit, but officials said no progress had been made.

On Somalia, Ban said he welcomed the seizure of a string of key towns from Islamist insurgents by AU troops there, saying it had "opened space for peace-building".

The country's al-Qaeda-linked Shebab militants have been losing ground to a 17 000-strong AU force and Ethiopian troops who invaded in 2011 from the west. – Sapa-AFP

Now that we are in the second week of lockdown, South Africans seem to be taking their unwritten civic duty of snitching very seriously
Read more
Advertising
Continue to the category
Coronavirus