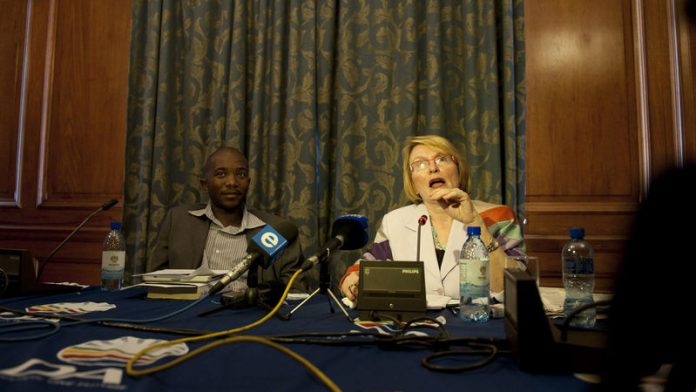 DA leader Helen Zille, who is also the premier of the Western Cape, told journalists on Wednesday that she has written to President Jacob Zuma asking for the appointment of the inquiry.

Zille has been involved in a public spat with the newspaper for the past 10 days after she pulled out of the New Age’s breakfast functions – funded by state-owned enterprises. Zille and the DA are opposed to sponsorship deal.

Zille said the New Age is almost entirely funded by the ANC at national and provincial levels, which accounts for 77% of its advertising revenue stream alone, despite the fact that it has no audited circulation figures.

Zille said the newspaper has received at least R64.6-million from the government in the form of advertising revenue and “sponsorships” since December 2010.

Zille revealed that after her party started asking questions in Parliament about the government’s spending on the paper, the New Age’s editor Moegsien Williams and two other senior managers – Atul Gupta and chief executive Nazeem Howa – visited the home of DA federal chairperson Wilmot James “for the express purpose of getting the DA to back off from the parliamentary questions”.

“The three adopted a heavy-handed approach,” she said.

Infogate scandal comparison
Zille compared the New Age’s funding saga to the apartheid era Infogate scandal of the late 1970s, when a commission of inquiry found that then prime minister John Vorster and Dr Connie Mulder were aware that public funding was used to finance the “government-friendly” Citizen newspaper.

“All the evidence points to the same thing: the ANC is using public money, both overtly and covertly to fund a newspaper which is openly favourable to their government,” said Zille.

She said that the commission of inquiry should specifically establish how much of the New Age’s overall revenue is derived from the state and the legality of using public money to fund a pro-government newspaper that was ostensibly started by a benefactor of Jacob Zuma and the ANC.

Meanwhile, Zille admitted to having asked Sahara Computers for funding before the 2009 general elections, but the DA received two donations from the company’s chief executive Stefan Nel, who donated in his personal capacity.

'A moneymaking racket'
She said in 2010, when newspapers started reporting about the Guptas’ relationship with Zuma, she instructed the fundraising department to cut ties with the Guptas and all their companies.

“I became concerned that they were channeling money to the DA via Nel. I then stopped accepting money from Nel as well.”

Zille described the New Age's business breakfast platform as far from being a sponsorship, but a moneymaking racket and a fig leaf to cover a channelling of millions of rands of public money going to a private company of Zuma and ANC benefactors.

“I cut contact because I would not be compromised by our benefactors,” she said

The Mail & Guardian has asked the New Age for comment and is awaiting their response.