A lone march to Pretoria 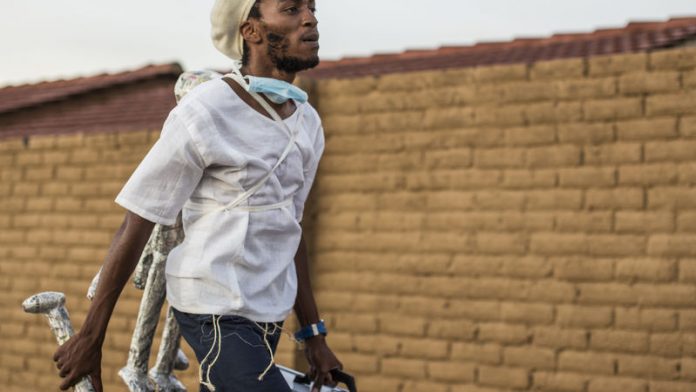 The heavily dreadlocked and bearded, underpants-clad figure of performance artist Sifiso Seleme engaged some of last year’s most troubling issues: the e-toll protests, The Spear painting fiasco and the Marikana bloodbath.

Although Seleme is making a name for himself as a performance artist, he trained as a dancer and photo-grapher, and he also owns the fashion label Africanism 13.

Seleme has many facets and the blurring of categories has befuddled arts insiders. “They always want to categorise: if you do something outside the categories, you become an outcast,” he said at a restaurant in Melville.

Seleme had just received permission from the police to stage a protest walk from the Chris Hani Baragwanath Hospital in Soweto to the Union Buildings in Pretoria. He got the idea of staging the walk to the seat of the presidency after his mother was injured by a drink-driving neighbour. Her protracted recuperation has meant repeated visits to the hospital and encounters that brought to the surface the disarray of public hospitals.

He said the service was appalling and, even worse, “people can’t complain about it. I know that sometimes people queue from 5am to 3pm.”

Seleme said that, one day, after someone voiced displeasure about bad service, “a hospital worker remarked, ‘think of this hospital as Marikana [where the miners were killed]’ ”.

“Why are nurses calling a hospital Marikana? The nurses are so rude; in the morning, even before they start working, you can see there is tension in the way they speak among themselves.”

About Marikana, the artist said: “Marikana was personal, as if it had happened to me.” He did a performance at a taxi rank referencing the massacre, which felt like a memorial, he said.

Free space
In the era of the object, the performance artist who doesn’t have anything for the gallery to sell isn’t exactly useful, and Seleme’s relationship with the gallery world is conflicted. “When you go to the gallery, you don’t see ordinary people there.”

This perhaps explains why all his performances happen in public spaces. He has recently performed on the Nelson Mandela Bridge, at the South Gauteng High Court and at taxi ranks.

“When I do my work in public places, I get peace of mind. Perhaps it’s because I am speaking directly to the people who influence my subject matter.” (Not that he has positive things to say about the dance scene: “It’s very hostile and manipulated by one festival.”)

Performance art is a vocation attended by danger. Seleme related how he has been physically abused by the police and threatened by strangers, and, because some of his performances are at taxi ranks, how he was almost manhandled.

“Last year I was almost attacked by a taxi driver who thought I was doing something [in support of] The Spear [Brett Murray’s controversial painting].”

Unless you are a hawker, a performance artist or in the entertainment industry (for which you require promotional posters), you won’t realise how strict the city’s by-laws can be. For instance, for his march to Pretoria, Seleme was told by the Johannesburg metro police that he couldn’t use the N1 highway — it’s illegal to walk on national highways — and he would have to use the R55 instead.

On the morning of the march, which began just after 5am, Seleme had scaled down his props. The hospital bed, the defining prop, wasn’t ready, but he had enough: he was dressed in an oversized white medical shirt and a surgical mask, on his back he had strapped human paper sculptures and in his right hand he held a first-aid kit.

When the march started at Baragwanath, dawn had broken, so it wasn’t to be Alex la Guma’s walk in the night. The early morning was half-lit by a pale, small moon that seemed to be hiding behind a cloudy visage. The hospital was already awakening from its sickly slumber and people were shuffling into the hospital grounds. Were these the people who Seleme said arrived at 5am to beat the queue?

After hastily dressing at the robots next to the main entrance of the hospital, Seleme crouched on the ground next to the security boom. He held his head contemplatively, as if balancing it, or as if all of Bara-gwanath’s ills had been placed on his shoulders. The slim and gangly figure soon took long strides across Soweto’s Chris Hani Street and trudged down a side road.

A police van, blue lights flashing, briefly escorted the lone marcher before taking an abrupt detour at a deserted intersection. Seleme’s stride was purposeful and soldierly, one that didn’t seem to attract the interest of the early morning crowd, walking to catch taxis.

As Seleme trudged up the hill through Industria, hordes of people were walking down into the valley. It was an intersection of walking ­philosophies: the walk to work and the walk of protest. Why not? After all, we are a country with a history of walking and of protest — the struggle is encapsulated in Nelson Mandela’s tome, appropriately titled Long Walk to Freedom.

It was fitting, therefore, that Seleme’s second pit stop was the Helen Joseph Hospital. On August 9 1956, Joseph was one of 20 000 women who walked to the Union Buildings to protest about the pass laws. That landmark moment is now celebrated as ­Women’s Day.

Like Joseph and all those women, Seleme’s walk would end at the Union Buildings. “I want to call on the president, Jacob Zuma, to come and visit the hospital unannounced.”

Seleme is a political animal and his oeuvre makes references, or anti-references, to South Africa’s political vocabulary. Be it popular lines that he inverts, or phallic props and the attendant showers, it shows an engaged artist. “We won’t kill for Zuma”, one of his taglines declares. A poster from his e-toll performances reads: “Malema was used like a ­condom. Those of you who don’t know how to use a condom, watch out for e-tolls.”

If Zuma introduces decent and universal healthcare in South Africa, his presidency could one day be likened to United States President Barack Obama’s, one of whose few redeeming features is the introduction of national health insurance for every American.

Seleme could one day tell his grandchildren: “I marched for that cause.”