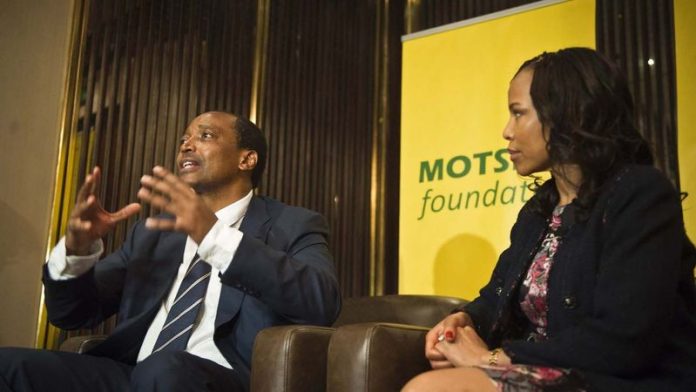 Patrice Motsepe, the executive chairperson of African Rainbow Minerals (ARM), redefined the business landscape this week when he announced that the Motsepe family would contribute half the funds generated from assets it owns to a foundation to assist the less fortunate.

The Motsepe family's annual contribution to the foundation, based on estimates of income from holdings in organisations that include ARM, Harmony and Sanlam, is estimated to be nearly R1-billion. Although Motsepe could not be pushed to disclose the amount, he said it would be "substantial" and influenced by market forces.

Shelagh Gastrow, of Philanthropy South Africa, said this week that the scope of Motsepe's contribution was impressive.

"A lot of high-net individuals in this country have been very generous but not at this scale. What we do see is a tendency to muddle business contribution with personal giving."

Gastrow said what she would like to see was a more institutionalised form of philanthropy, which involved the setting up of foundations, as Motsepe had done, because it was more sustainable.

"Wealthy people always get asked for money and, whether or not they say yes or no, could depend on how they are feeling that day and could lead to poor decisions being made or money wasted.

"When business people institutionalise their philanthropy by setting up a foundation, it makes it easier to direct organisations to the foundation, which has to evaluate each case objectively."

She said a foundation also kept going after the contributor died.

Tax breaks
Motsepe, during his announcement this week, said he was inspired to make the contribution by Americans Bill and Melinda Gates and Warren Buffett, who are part of the Giving Pledge campaign.

Motsepe will become the first non-American citizen to sign up to the Giving Pledge, which invites the wealthiest individuals and families in the United States to give the majority of their wealth to philanthropic causes and charitable organisations either during their lifetimes or after their deaths. According to Motsepe, 82 American families have joined the Giving Pledge.

He said a lack of tax breaks, such as those in the United States, for people who donate to charity or set up foundations to carry out charitable work, could be discouraging philanthropy in South Africa.

The Private Philanthropy Circle, also referred to as the PPC, an independent forum of philanthropists, local trusts and foundations, is in talks with the treasury and the South African Revenue Service (Sars) to look at ways of "creating a more enabling environment", according to Gastrow.

"The philanthropy circle has had two meetings with the treasury and they have been asked to make a submission," she said.

Taxpayers who donate to charity are allowed to deduct 10% of their taxable income in the year they made the donation. Providing that the organisation has been registered and recognised by Sars as a public benefit organisation in terms of section 18 of the Income Tax Act and providing it is not a sport, religious or arts and culture organisation.

"The real problem around our tax regulations is that, in order for donors to get a tax certificate, the charity organisation or non-profit organisation has to spend 75% in that financial year, so these organisations have no endowments," said Gastrow.

Charitable donations
"Long-term investment is not being encouraged in non-profit organisations."

The present donation to charities in South Africa is a mere drop in the ocean when compared with annual income tax refunds of about R110-billion and value added tax (VAT) refunds of R100-billion.

According to Adrian Lackay, the Sars spokesperson, for the current financial year, 9773 companies claimed for charitable donations, resulting in R37.5-million being refunded. In the case of individual claims, 52171 taxpayers claimed and R117.5-million was refunded. "It is not substantial in terms of what Sars collects," he said.

Foundations were exempt from income tax but would still have to pay tax on employee salaries and VAT, if goods were bought. "Any organisation listed as a public benefit organisation has to submit audited financials and they need to stick to the criteria they initially submitted to Sars when they were granted the tax reprieve," Lackay said.

Recently 70 000 NGOs were deregistered for noncompliance. On top of this, new legislation has been proposed by the department of social development, which puts in place a new body to examine the books and activities of NGOs and deregister those involved in undefined "unscrupulous practices".

Organisations that object to being deregistered will be able to appeal to a tribunal but in the mean time they will not receive money from the government and it's unlikely that corporates or individuals will give an unregistered company any money.

Huge responsibility
These issues aside, Gastrow said she would like to see more wealthy individuals making personal contributions. Philanthropists did not have to be wealthy and many of those recognised by her organisation were average people who were using their own money to assist others.

Motsepe, in announcing his decision, said that the more privileged in South Africa had an obligation to give something back.

"It's the recognition that people in my position have a huge responsibility to other South Africans who are less fortunate," he said on Wednesday.

"Most of our donations have been private but the need and challenges are great and we hope that our Giving Pledge will encourage others in South Africa, Africa and other emerging economies to give and make the world a better place."

The Motsepe Foundation will focus on health, education and the empowerment of women and the youth, and will only consider organisations that are viable and self-sustaining. A council consisting of representatives from NGOs, churches and organisations with links to the community will oversee the foundation.

Other South Africans have made personal contributions to assist NGOs or organisations.

They include Jay Naidoo, a former unionist and now chairperson of the Partnership Council of the Global Alliance for Improved Nutrition and chairperson of the J&J Development Trust, who sold a third of his shares and donated the money to two charities.

Allan Gray, the asset management entrepreneur, set up the Allan Gray Orbis Foundation, making a R1.15-billion endowment to it from his personal funds. The foundation provides scholarships for grade 12 pupils and university students as part of its efforts to develop entrepreneurs and leaders.

Motsepe confirms Afcon is on despite ‘enormous challenge’ of Covid surge