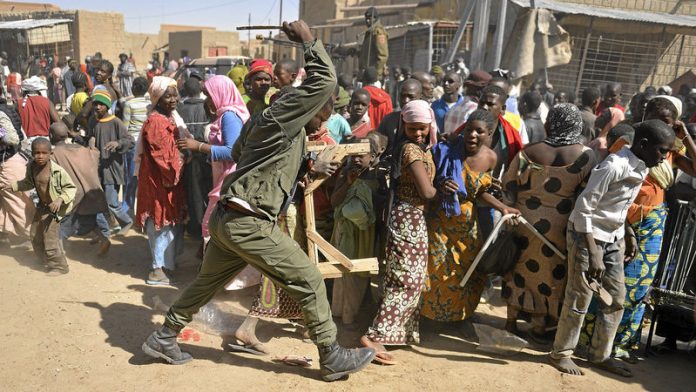 Timbuktu was rocked by a wave of revenge attacks on Tuesday on communities perceived to have collaborated with the Islamists during their 10-month occupation of the city.

Malian soldiers meant to bring security to the famous trading outpost in northern Mali stood by and watched as crowds looted premises belonging to Touareg and Arab traders. French forces, which had led the recapture of Timbuktu, stayed outside the city at the airport. Meanwhile, hundreds of people swarmed into the closed-up shops on the main street, smashing padlocks and stripping the stores.

"These shopkeepers were the militants, they were supporting al-Qaeda," said Alou Toure who, seconds before, had been hammering the padlock of an electronics store with a heavy club. "They looted every­thing from us so now we get our revenge."

The army could do little to stop the crowds, said Malian Captain Cheikme Konate, who said that residents had lost their fear of soldiers. "We cannot shoot. I don't want them to say the army came to kill us."

Weapons and ammunition were found in some of stores, fuelling rumours that the Islamists who fled at the weekend were planning to retake the city. Many ethnic Touaregs and Arabs have also left Timbuktu, fearing a wave of revenge attacks after members of their community started last year's rebellion against the central government.

One Touareg local who stayed behind – a veteran of former Libyan leader Muammar Gaddafi's army – said that Mali's problems were about racism as well as religion. "This crisis is about revenge between Mali's different ethnic groups. The biggest problem is the racism, which is in our heads and will take a long time to cure."

The riots in Timbuktu and unrest in other recaptured towns, such as Gao, have been a reminder that a second, more complicated phase of the war in Mali awaits. Less than half of the 7 000 foreign troops promised to stabilise the country have been deployed.

Humanitarian fallout
Meanwhile, there is concern about a critical shortage of funding for the humanitarian fallout from the conflict, with only 1% of the budget needed for the next year so far pledged. A senior UN official in Mali, Hadorn Max, said that $370-million would be needed to feed, shelter and provide medical services to the more than 400000 people displaced during the past year. "With the focus on military action, we are concerned that hum­an­itarian needs will be forgotten," he said.

Earlier this week, with the retaking of Timbuktu, it was unclear who was celebrating what. Dazed Malian soldiers, just through the city gates, were mobbed on the back of trucks by women and children dancing to the chant of "Vive la France, Vive le Mali!"

After 10 months of dour Islamist occupation, everyone wore the brightest colours they could find. The men at a café erupted in their own gleeful shouts, charging up the dusty street, fists pumping in the air. On Monday, Timbuktu's day of liberation, Mali had just scored the goal they needed to reach the quarterfinals of the African Cup of Nations. This was the first match anyone had been allowed to watch since Mali's fabled desert city was placed under fundamentalist sharia law last April. It was too much for one of the older men. Dressed from head to foot in France's Tricolore, he slumped on to a chair, overwhelmed by emotion.

What many residents were already calling a "nightmare" was brought to an end when 250 French paratroopers dropped out of the moonlit sky on Monday night at the northern gate to the city. At the same time, a French armoured column blocked the southern gate. By Monday morning it was clear that most of the Islamists had left. Locals said that many of them had left in a convoy of pick-up trucks at the weekend.

"Not a shot was fired," said a French infantry colonel who led the operation. The veteran of the war in Libya revealed that the real fighting had taken place in the six days preceding the paratroopers' assault. Using Puma attack helicopters and flying missions, they had swept the surrounding desert and riverine marshes for militants and their vehicles. The aim of the operations had been to avoid the prospect of a firefight amid the warren of alleys that make up Mali's Unesco World Heritage site.

At the airport outside the city, another French colonel, Paul Geze, said Timbuktu had been secured but warned that some militants may have remained behind, "hidden among the population".

Looting
Some angry residents had already started looting houses where the militants of the Malian-led Islamist group Ansar Dine and fighters from al-Qaeda in the Islamic Maghreb (Aqim) had stayed. All that remained of the Aqim Islamic police headquarters, in the premises of the old bank, was a black sign cemented into the wall. Residents said that rough justice – based on a Wahhabist interpretation of Islamic law – had been meted out. Inside the banking hall a few scattered chairs and an upturned table showed the haste of their departure.

The recapture of Mali's most famous city followed the pattern that has emerged in the fortnight since French forces intervened to stop an Islamist advance through the centre of this vast West African country.

Despite the blood-curdling warnings issued by the three main Islamist groups – Ansar Dine, Aqim and the Movement for Oneness and Jihad in West Africa – they have avoided an open confrontation with a better-equipped Western army.

The rapid advance has surprised many observers, with one diplomat in the capital, Bamako, saying it had gone "faster than expected". It has also bred pride and confidence among the French command, with one senior officer calling it a "fabulous adventure". Flying low and fast over the desert plain outside Timbuktu, a French infantry commander, who declined to give his name, said: "I don't think many armies in the world can do what we've done in 10 days."

Other officers were more cautious, acknowledging that many militants have retreated into the desert and mountains where their local know-ledge and experience may give them a better chance of hitting back in the second phase of guerrilla attacks that experts expect will follow.

Praise songs
There was little sign of caution on the streets of Timbuktu. People emerged from behind mud-and-wattle walls to sing praise songs for their liberators. Others offered thanks to French President François Hollande.

A former tour guide, Ibrahim Traore, said his city had come close to dying and that tourism income had dried up entirely. Mohamed Ibrahim Traore, a shopkeeper whose store has been closed for months, said that women were happy "because they don't have to put on the veils on their face".

"Today we got our liberty back," the 36-year-old said. "Every Malian deserves their liberty. The French army and the Malian army have given this."

For some, the liberation came too late. The Islamists carried out their final execution last Thursday, shooting a resident who had tried to slow their retreat by stealing petrol from their fuel dump outside the city. Timbuktu's mayor, Ousmane Halle Cisse, who has had to remain in Bamako in recent months after making repeated appeals for an international intervention to remove his city's occupiers, said that important manuscripts had been burned in the final week of Islamist rule.

The full extent of the damage to the city's treasure trove of hundreds of thousands of manuscripts is still to emerge.

A sense of isolation in Timbuktu has increased with the electricity cut off and the cellphone network down, preventing all but satellite connections with the outside world. A black banner declaring sharia law still flew in the wind at one of the city gates. It will soon be removed but the full cost of northern Mali's descent into extremism will take months, if not years, to be properly understood.

Timbuktu has housed documents from Africa's post-colonial history for centuries. In 1973 the Malian government created the Ahmed Baba Centre to house the collection, which was to be transferred to a new building opened with South African backing in 2009.

This is the building that news reports said had been burnt down last weekend. And it is a story that Timbuktu's ousted mayor, Ousmane Halle, corroborated when he told the Associated Press: "They torched all the important ancient manuscripts. The ancient books of geography and science. The history of Timbuktu, of its people."

Susana Molins Lliteras, a researcher at the Tombouctou Manuscripts Project in Cape Town, said the reports are wrong and the manuscripts appear to be safe. "The television reports show that the library is intact, and with very little damage to the inside. It looks the same as the last time I was there [in December 2011]," she said.

There were only a few manuscripts in the new library to start with, as the process of transferring the collection of 40 000 manuscripts had only recently started, she said. "The majority of the documents were still in the old building. And before the [information] blackout we knew these had not been touched."

This building was left alone last year when the rebels arrived and most of the research team fled to the capital, Bamako. The rebels turned the new building, with its air conditioning, into their headquarters.

The researchers did manage to hide hard drives with some of the digitised manuscripts and others took manuscripts when they left. "The problem is we will only know more when it is safe enough for the researchers to return," said Lliteras.

Private collections should also be safe, she said. These contain about 200 000 manuscripts and seem to have escaped the attentions of the rebels.

The New Yorker also reported that these collections were safe because Islamist rebels had not entered private homes for fear of being "polluted".

"They were not burned. They were put in a very safe place," he said. – Sipho Kings