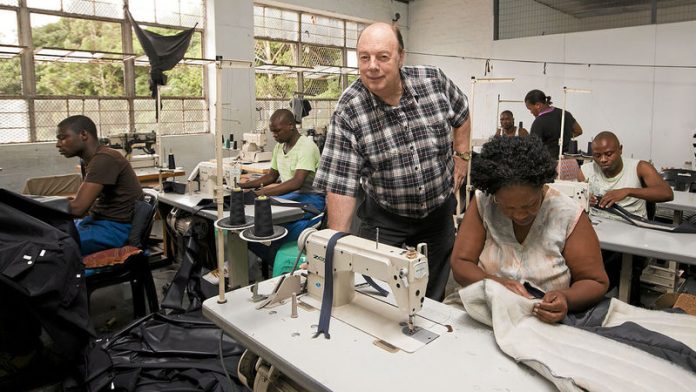 Leon Deetlefs, who for 10 years was national compliance manager of the bargaining council, is now chief executive of the non-compliant KwaZulu-Natal-based United Clothing and Textile Association.

Tension in the industry has risen over a high-profile case bought by the association and others challenging the extension by the labour minister of the bargaining council agreement to non-parties to the council in 2010, which was heard this week. Judgment was delayed. Stoking the fire is the fact that the bargaining council, for the first time since late 2010, has handed about 50 writs for execution on factories and an estimated 15 factories have already been closed in the past few weeks in Chatsworth and Newcastle.

Deetlefs, well known in the clothing industry because he was a highly effective hatchetman responsible for closing about 60 factories between 2007 and 2010, mainly in the Free State and Newcastle, now believes that the bargaining council model is outdated and counterproductive.

The fact that employment in the industry had dropped from about 240 000 a decade ago to about 55 000 was proof of this, he said.

And, he said, the job carnage should not be blamed on imports from the East as South Africa could and should be competitive.

Deetlefs believes the industry can be resurrected and returned to growth. The clothing industry is, according to Statistics South Africa, the lowest-margin sector of South African manufacturing, but it is labour-intensive and could create many jobs.

Businesses expanded
Deetlefs left his bargaining council job in November 2011 to start a job-creation project in the Free State with his business partner, Tebogo Lioma. They set about finding small black business people who had experience in the clothing industry. Those they selected often still had small operations with a few machines for producing or repairing clothes.

The businesses selected were converted into co-ops and a central organisation, run by Deetlefs and Lioma, was created to train, administer, do marketing and upgrade machinery.

They soon enlisted the support of the Free State MEC for development for their plan and were promised R33-million to finance it.

The approximately 20 co-ops created were in Botshabelo, Thaba Nchu and Phuthaditjaba. Immediately, the businesses expanded to employ about 1 500 people.

Typically, the original owners and their partners or family hold 50% of the co-op shares; the other 50% is usually owned by the workers, who have proportional board representation. But every agreement is different. Every week, workers are paid an advance estimated profit share, which amount is varied by the board on a short-term basis according to business prospects. Depending on actual profits earned, a dividend is paid once a year and could be equivalent to 10-15 times weekly earnings, Deetlefs said.

According to Deetlefs, the Free State co-ops began to thrive. The 20 co-ops were expected to become self-sustaining by mid-2013, but financing was stopped because of political turmoil in the Free State in 2012, during which the MEC was dismissed. Only R2-million of the promised R33-million was paid.

The central organisation still exists, but without start-up financing the co-ops have shrunk and now employ perhaps 200 to 300 people. It was a disappointment, Deetlef said, but he is convinced that the model's effectiveness has been proven.

"It's been proven repeatedly that you can't create small businesses without training and other support. In a previous state-funded project to set up black clothing manufacturing co-operatives in KwaZulu-Natal, 39 were set up, but almost all have collapsed because of a lack of support."

Funding to create the central support organisation in KwaZulu-Natal is being sought from the trade an industry department's cluster incentive scheme. If funding is received, it will be a breakthrough for the former non-compliant companies, which have been denied any state help in the past.

But, there are bigger threats to Deetlef's plans. The first is that it has been proposed – Deetlef believes by the unions – that the Co-operatives Act should be changed so that co-op workers will in future fall under the Labour Relations Act. This would heap onerous requirements on co-ops and would probably kill them, Deetlef said. The association is strenuously opposing this proposal.

But even if the proposal goes no further, if the unions challenge the new model in court, there is a good chance that the co-op workers will be found to be employees (and therefore subject to the Labour Relations Act). This is because the courts generally adopt a wide interpretation of the definition of "employee".

And even if that did not happen, said labour consultant Tony Healy, if this kind of franchised co-op proved to be successful, the government was likely to close the gap because it had a bigger commitment to collective bargaining and minimum wages than to the development of co-ops and even job creation.