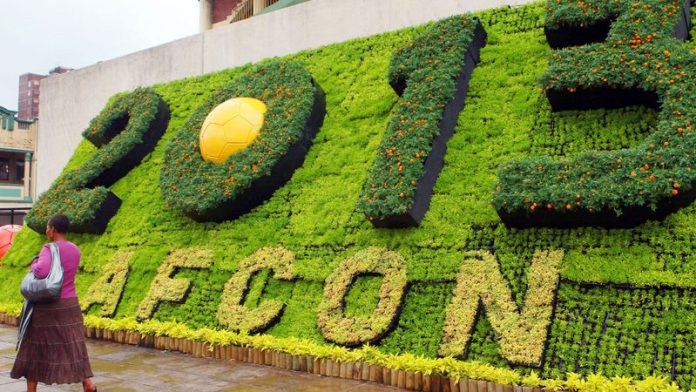 Police officers looked on as they toyi-toyed and sang, across the road from the Nelson Mandela Bay stadium, where the match was scheduled to start at 5pm.

They claim the Confederation of African Football (Caf) had promised to pay the mostly unemployed young men and women R1 000 after their five-day training.

"They didn't give us the money for the training. We started our training on the 5th of January and ended on the 16th," Themba Tshayingwe said.

"They [CAF] promised us R1 000 at the training," Tshayingwe continued. "They said for the period of five days we would be paid R200 per day. Now they say they don't want to pay us. They then said they are not responsible for paying us. So who then is responsible?"

Tshayingwe said around 500 volunteers had not received their money, and many of them had used loan sharks to get to the stadium. "Bear in mind we are using our own bus fare here. Some of us went to loan sharks for the bus fare."

Another volunteer, Wonder Mkokeli, said they would not work until they had been paid. "Up until our issues are resolved we are not going to work today. That's the decision we told these volunteers." Mkokeli said they had asked the mayor to intervene.

"We've written several letters to the mayor asking him to intervene because this issue started a long time ago. "We don't have money, we are unemployed. We want to be here, we want to make this tournament a success, but now they don't keep their promises." – Sapa

In one act Confederation of African Football President Issa Hayatou may have reduced Fifa's "our game is fair play" to a hollow political slogan.
Read more
Sport

Togo has filed a legal complaint against CAF for failing to protect its team from a deadly attack as it travelled to January's Africa Cup of Nations.
Read more
Sport

Togo plans to fight its suspension from the next two editions of the African Cup of Nations after the team withdrew from January's tournament.
Read more
Sport

Egyptian supersub Gedo has outshone stars such as Samuel Eto'o and Didier Drogba to finish as the top-scorer at the African Cup of Nations.
Read more
Sport

Coach Milovan Rajevac believes Ghana's display at the African Cup of Nations will help his players at the World Cup, despite losing the final to Egypt
Read more
Sport

‘We are in Angola to win the title’

Egypt turned up for the Afcon with only one intention, to defend their status as African champions and they seem well on their way to doing just that.
Read more
Advertising
Continue to the category
Politics