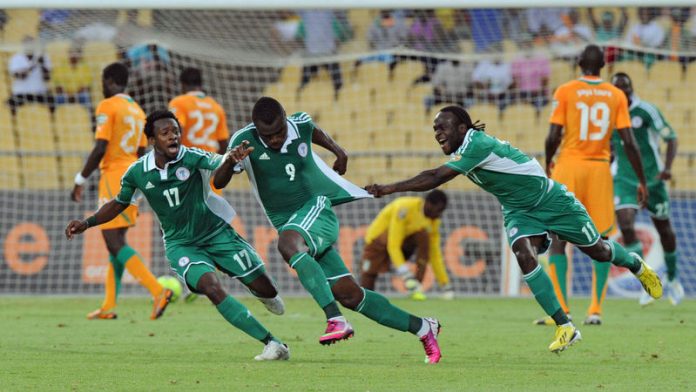 A goal in either half from Emmanuel Emenike and Sunday Mba booked Nigeria a spot in the semi-finals, sending Côte d'Ivoire crashing out of the competition.

After Cheick Tiote cancelled out the opener from Emenike, Mba regained the lead for the west Africans 12 minutes from time, before a late flourish from the tournament favourites, though it was not enough to unsettle Stephen Keshi's side, who held on for a famous victory.

Keshi made only two changes to the Nigerian team that beat Ethiopia 2-0 in their last group C outing. Midfielder Fegor Ogude -– suspended for picking up two yellow cards in the group stages – was replaced by Ogenyi Onazi, while striker Ikechukwu Uche made way for Aide Ideye.

Meanwhile, the Ivorians welcomed back African Footballer of the Year Yaya Toure and the rest of their stars, after giving them a break during their last group fixture.

Coach Sabri Lamouchi made eight changes to the starting lineup that did duty in their 2-2 draw with Algeria last week.

Having already qualified top of the group ahead of the Algeria clash, Lamouchi had fielded a weakened starting XI, with an eye on the knockout meeting with the Super Eagles, but named his strongest possible team for Sunday's game.

The first real opportunity of the match fell to Nigeria's Victor Moses, who made a darting run in the 10th minute, before drilling a shot at goal, but Ivorian goalkeeper Boubacar Barry parried the effort, before the defence cleared the danger.

Nigeria got their first sniff at goal in the 27th minute, with Aide Ideye laying the ball off to Emenike deep inside the Elephants' half, but Emenike was unable to keep his shot down and blazed over Barry's goal.

Nigeria kept up the pressure and were deservingly rewarded two minutes from the interval, as Moses continued to trouble the Ivorian defence and was brought down outside of the area.

Emenike stepped up to take the resulting set-piece, unleashed a deadly long-range effort at goal and beating Barry, who was left stranded.

Côte d'Ivoire came out into the second period looking to find a way back into the clash and were gifted an early opportunity when Didier Drogba was fouled just outside the Nigerian box.

Drogba delivered a neat ball toward the back post, finding an unmarked Tiote, who headed in past goalkeeper Vincent Enyeama, levelling the scores early in the second half.

The Ivorians found their rhythm – with the help of a boisterous crowd — and stamped their authority on the game, with Drogba, Tiote and Salomon Kalou threatening the Nigerian defence.

Nigeria, meanwhile, had chances of their own, with Ideye heading a set-piece ball at Barry from close-range, but the Elephants' shot-stopper was equal to the task and made a good save low down.

Shortly after, Toure was put through with a pinpoint pass that split the Nigerian defence, before the playmaker turned and rocketed a shot at Enyeama, who parried away and kept the scores locked at 1-1.

The Super Eagles soaked up the pressure and stunned their opponents a second time when they snatched the lead through Mba, who was allowed space to run in the Côte d'Ivoire half.

The striker passed three Ivorians before getting his shot away, which took a nasty deflection and looped past Barry. With the lead back intact, Nigeria had to withstand a barrage of Ivorian attacks, as second half replacement Lacina Traore came close, but was thwarted by a resilient Nigeria defence. – Sapa