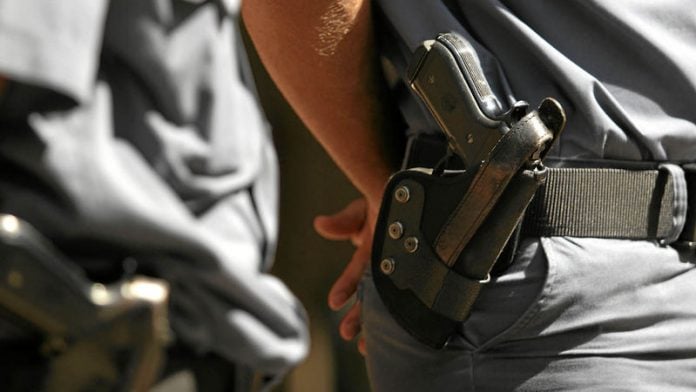 The group was arrested in South Africa's northern Limpopo province on suspicion of running an illegal military operation after an investigation by a crime intelligence unit, police said on Tuesday, without providing further details.

A separate law enforcement official said they were membersof the M23 rebels that carved out a fiefdom in eastern DRC's North Kivu province, dragging the region back into war and displacing an estimated half a million people.

The M23 rebels, a group of army mutineers who launched their offensive after accusing DRC President Joseph Kabila of reneging on the terms of a March 2009 peace agreement, have since broadened their goals to include removal of Kabila and "liberation" of the country.

The 19 were expected to appear in a court in Pretoria on Tuesday to face a charge under South Africa's Foreign Military Assistance Act, police said.

The war in the DRC has been going on since the early 90s. But the latest cycle of unrest in the area erupted last year when the rebels seized mining hub Goma before pulling out 12 days later.

The rebels breifly seized the city of Goma in November last year too, home to at least one million people, as well as an international airport and a major United Nations peacekeeping base.

Last month leaders from Africa's Great Lakes region were due to sign an agreement aimed at ending recurrent unrest in volatile and mineral-rich east of the country.

UN secretary general Ban ki-Moon urged regional leaders at the African Union summit meeting last month to "endorse a peace security and cooperation framework to address the structural causes of the recurring cycles of violence" in the region.

The content of the agreement had not been made public, but a signing ceremony with Ban and eight heads of state had been set for January 28.

The presidents of Rwanda and Uganda – which UN experts have accused of backing the M23, a charge both governments deny – as well as DRC, Angola, Burundi, Republic of Congo, South Africa and Tanzania were expected to sign the deal.

The UN Security Council passed a France-drafted resolution at the end of November last year, saying it would consider sanctions against more M23 rebel leaders and "those providing external support"

Peace talks have been held in Uganda but have so far made little headway. – Additional reporting by Reuters, Sapa