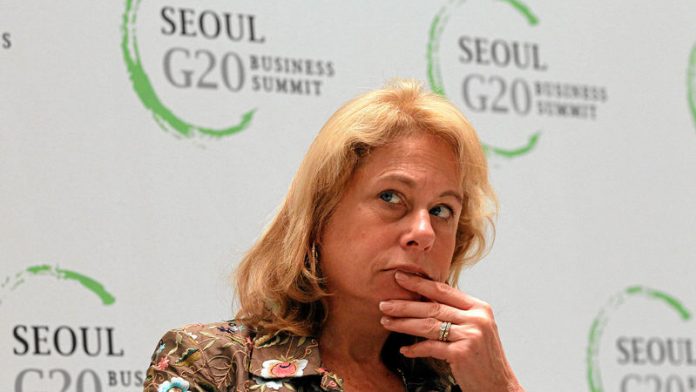 Carroll said mining companies and government had a joint opportunity to make mining viable but said government and labour's contribution to the mining environment was also essential.

"Stable labour relations … and regulatory certainty is important to mines' competitiveness. Mining companies plan 10 years ahead so it needs certainty to plan, or they [companies] will invest elsewhere," she said at the mining indaba, currently running in Cape Town.

She said "onerous and unpredictable regulations" would discourage investment.

Carroll said law and order, industrial stability and regulatory stability were among the factors that need to be adhered to for the mining sector to flourish.

The outgoing chief executive said partnership between government, mining, business and labour was essential. "Business is a partner and not a pariah," she said.

Carroll said the plan presented by Anglo America's platinum arm, Anglo Platinum, was a "comprehensive and creative plan not created by any company in South Africa".

Redeployment
?The company plans to redeploy 9 000 people and to create jobs for the remainder of 14 000 retrenched staff. "We know how to do it, and have done so through Zimele [an enterprise development fund]."

Anglo American plans to provide high quality training to those retrenched to ensure that it brings benefit to the Rustenburg area and people from labour sourcing areas, she said.

Carroll said talks are presently underway between the department of mineral resources and labour and after that the section 189 consultation process will resume for the required 60 days.

While AngloPlat is presently stuggling with high energy and labour costs against, lower demand and prices for platinum, she said the company has every intention of continuing to invest AngloPlat. "We have a business plan to invest R150-billion in the next decade in platinum," she said.

Carroll said: "Beneficiation has a role to play, but only if based on a sound business case and on sectors where South Africa can have a competitive advantage."

Meanwhile Randgold Resources, a gold mining and exploration company operating in the prospective gold belts of west and central Africa, said on Tuesday that mining code changes proposed by a number of African countries will deter further investment in the continent.

Bristow said Mali, Cote d'Ivoire and the Democratic Republic of Congo, where Randgold has operations, already handed over a substantial slice of the net revenue pie to the state, despite Randgold's funding of the discovery and development costs and the fact that they carried all the risks.

"It is disturbing that there is a growing tendency among the sub-Saharan mining companies to want more without giving anything back. Even a moderate change in their current codes will dimish these countries' ability to compete for direct fixed investment or to encourage reinvestment," he said.

He said for government to get more from mining operations, they need to participate positively in the value creation process. "As we have seen only too often in the mining industry, mergers and acquisitions seldom deliver value to shareholders, let alone other stakeholders."

He said government's role should be to provide a stable, business-friendly regime that will attract, not drive away investors.

She said that she was pleased to be handing over the company's reigns to Mark Cutifani, who had the same "values and objectives" as she had.

Estimates hint that the scaling down of work in response to Covid-19 will result in a sharp drop in production in April and by 4.5% for the year
Read more
Business

For Zambian mining, 2018 was both a successful and a newsworthy year
Read more
Business