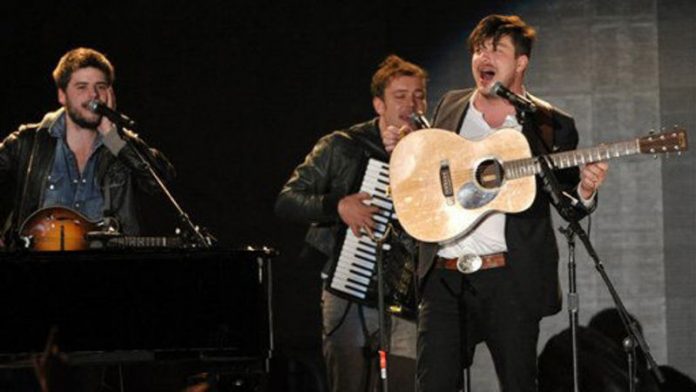 On an evening that rewarded mostly young or lesser known artists over veterans and household names, British folk band Mumford & Sons picked up two Grammys, including the coveted Album of the Year for .

Unlike last year, when British singer Adele swept the board with six trophies, there was no single big winner. Ohio rockers The Black Keys, formed by Dan Auerbach and Patrick Carney, took home three Grammys including Best Rock Album for El Camino.

Auerbach also won the prestigious Producer of the Year award, bringing his tally to four on Sunday.

Mumford & Sons went into the ceremony with six nominations but the Londoners had to wait until the last minutes of the three and 1/2 hour televised show to claim the top prize. "We just sort of resigned ourselves that last year was Adele's year and this year would be the Black Keys' year," lead singer Marcus Mumford told reporters backstage, adding that it felt "awesome" to finally win.

fun. was named Best New Artist and won Song of the Year for its smash 2012 hit We Are Young.

"I don't know what I was thinking writing the chorus of this song. This is HD [television], everyone can see our faces, and we are not very young. We have been doing this for 12 years," lead singer Nate Ruess said while accepting the award.

Australia's Gotye won three Grammys, including Record of the Year for his heartbreak hit Somebody That I Used to Know. The singer-songwriter said he was surprised by the runaway global success of the song, which was recorded in a barn on his father's property in Australia.

"I wouldn't mind if I don't have another song that has a moment like this … I have written maybe better songs and hopefully will write better songs," Gotye told reporters backstage.

Rappers Jay-Z and Kanye West walked off with three trophies, two for their collaboration N****s in Paris and one for their song Mercy, featuring R&B star Frank Ocean.

The 80-plus Grammy categories are voted on by members of the Recording Academy, which is made up of creative and industry professionals in the music world.

Timberlake returns
The night's other winners included electronic music Skrillex with three awards, Adele, Zac Brown Band and Miguel. Kelly Clarkson, the first winner of TV contest American Idol, gave a shoutout to up-and-coming Los Angeles R&B artist Miguel as she collected her Grammy for Best Pop Vocal Album, saying, "I don't know who the hell you are but we need to sing together … That was the sexiest damn thing I've ever seen."

One of the night's most anticipated performers, Justin Timberlake, returned to the spotlight with his first televised performance since he released Suit & Tie in January, his first new song in five years.

Country-pop darling Taylor Swift kicked off the show with a circus-themed set for her hit single We Are Never Ever Getting Back Together.

Bruno Mars, Rihanna and Sting joined Ziggy and Damian Marley for a lively tribute to late reggae singer Bob Marley, featuring Locked Out of Heaven, Walking on the Moon and Marley's hit love song Could You Be Loved.

Rihanna chose to forego her usual dance-heavy stage performances for a stripped-down rendition of the ballad Stay, accompanied only by a piano.

Fusing rock and R&B, pop-rockers Maroon 5 joined Alicia Keys on stage to duet on their hits Daylight and Girl on Fire.

Britain's Elton John led a tribute to the late US rock musician Levon Helm of The Band, singing The Weight with Mumford & Sons, Mavis Staples, Zac Brown Band and Brittany Howard of Alabama Shakes. The song was also dedicated to the victims of the Sandy Hook school tragedy in December, where 20 children and six staff were shot to death. – Reuters

The weekly pop sack: Life in the time of disgrace