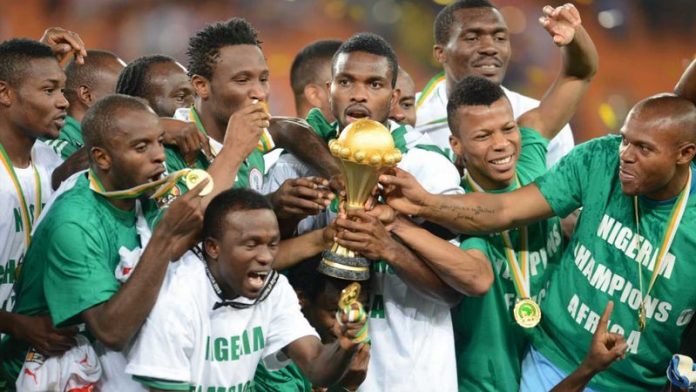 Sunday Mba struck with a left-footed volley in the first half as Nigeria beat Burkina Faso 1-0 at the National Stadium on Sunday to end a 19-year Africa Cup of Nations (Afcon) trophy drought.

The Super Eagles, playing in the tournamernt finale for the seventh time, had the better chances throughout. They were rewarded when Mba scored in the 40th minute, and held on to secure their third continental crown, and their first since 1994.

The result ended a dream run from the Berkinabe, who reached the semifinals for only the second time in their history, before edging Ghana on penalties to book their place in the gold medal match. Victor Moses made a return from injury straight into the Super Eagles' starting lineup, while Emmanuel Emenike did not recover from injury in time for the match and was replaced by Ikechukwu Uche.

Burkina Faso were relieved to have the services of Jonathan Pitroipa after his semifinal red card was rescinded, and they retained an unchanged run-on side.

Nigeria held on to the ball from the first whistle and Brown Ideye made a run down the middle, releasing Eric Ambrose, but his shot from in the box was directed straight at goalkeeper Daouda Diakite.

An eighth minute free kick from Victor Moses, who recovered from injury in time for the match, found the head of Efe Ambrose but the shot was off target. From the ensuing corner, Moses went long and the ball was headed towards goal, without Diakite able to gather, but Ideye sent his strike sailing just over the bar.

Burkina Faso were nearly dealt a cruel blow through some careless defending in the 19th minute. A poor backheel by defender Paul Koulibaly on the edge of area gifted Nigeria the ball. Ideye ran sideways as the Burkinabe defence moved in to cover and Nigeria could not manage a shot.

A minute later, Moses probed again as he ran down the left, but he reeled off an average shot which was gathered by Diakite.

The first shot for the Burkinabe came in the 25th minute when Aristide Bance went for goal, but his long range effort was well over target. Bance was involved again three minutes later, on this occasion with a free kick from 30 metres out. He went for a low shot left of the wall but was wide. After a bustling move down the centre shortly before the break, Mba gathered a loose ball in the box, turned past a defender and had no problem finding the back of the net to give Nigeria the lead.

Three minutes after the interval, Ideye took a shot from an acute angle which had the beating of Diakite, but the ball bounced centimetres wide.

A 55th minute counter-attack by Nigeria allowed Moses to run unhindered toward the opposition area, but he took too long to shoot and a defender was able to partially block the shot.

Just before the hour mark, Bance flicked on with a header from a free-kick but Vincent Enyeama was able to collect the ball comfortably. Wilfried Sanou came close to levelling the scores in the 74th minute, but his powerful shot was directed just past the far post from close range.

Nigeria coach Stephen Keshi has become only the second player to win the Afcon title as a player and a coach. – Sapa