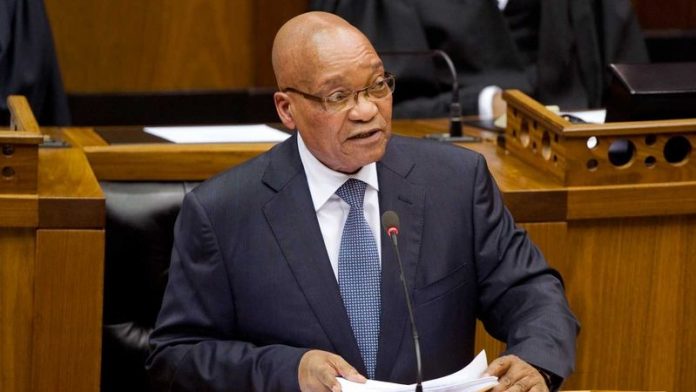 President Jacob Zuma prioritised land reform, a review of mining royalties' taxes, and a crackdown on violent protest. He also appeased civil servants by promising to investigate their remuneration, in an address that reasserted his authority but did not reveal anything new.

The State Of The Nation address on Thursday was barren on fresh ideas or a comprehensive plan to address job creation. However, the president spoke at length about the infrastructural rollout, which is expected to stimulate job creation. Zuma mentioned, without giving details, that R3-billion had been set aside by the Jobs Fund for projects that will create jobs.

Zuma appeared to offer a carrot and stick for teachers by promising to investigate their salaries but still emphasising the desire to declare teaching an essential service – a sticking point with teacher unions.

“By saying education is an essential service, we are not taking away the constitutional rights of teachers as workers have the right to strike”.

He said he would establish a presidential remuneration commission, which will investigate the appropriateness of the remuneration and condition of services provided by the state to all its employees, but a caveat to the commission’s work is that it must also assess the return on investment.

Zuma again reiterated that the national development plan (NDP) was the roadmap for the country’s growth and development, a theme he started at the ANC conference late last year. In the context of a spate of grim events of rape and brutality against women, Zuma did not mince his words, describing those who perpetrated such acts as animals.

It was widely hoped that Zuma would give greater detail on the proposed youth wage subsidy, but he refrained from taking a clear stand on the issue. He indicated only that discussions in the National Economic Development and Labour Council (Nedlac) had “been concluded … [and] that agreement has been reached on key principles,” and that parties would sign an accord later this month. Means to address the scourge of youth unemployment fell to existing government programmes such as the expanded Public Works Programme.

In line with the emphasis by the NDP, the president emphasised the need for all social actors, including business, labour and civil society, to work together to achieve the country’s objectives, especially the imperative to grow the economy threefold in order to create 11-million jobs by 2030.

Despite a recognition of the concerns raised by the private sector, following a meeting held between Zuma and the business community recently, indications that government is going to review the royalties tax regime for the mining sector could raise hackles among corporates and investors.

Later this year Finance Minister Pravin Gordhan would commission “a study of our current tax policies, to make sure that we have an appropriate revenue base to support public spending”, said Zuma.

“Part of this study, will evaluate the current mining royalties regime, with regard to its ability to suitably serve our people,” he said.

It is not clear if this would involve the introduction of a resource rent tax, with a reduction in the royalties tax rates, as advocated in the ANC’s policy discussion document on state intervention in the minerals sector.

Details will hopefully be fleshed out in the coming weeks, and will depend on the treasury’s findings. But this move is in line with the ANC’s policy positions that came out of Mangaung. In its resolutions on economic transformation, the party said the "state must capture an equitable share of mineral resource rents through the tax system and deploy them in the interests of long-term economic growth, development and transformation.”

Zuma’s assertion that there was greater certainty in the minerals sector was quickly questioned by analysts.

Peter Attard Montalto, director and emerging markets economist at Nomura International said in a response to the address that the "opposite is true" given additional regulatory reform and amendments to mining legislation coming up in Parliament.

While the president made little reference to the actual number of jobs created over the past year, it is clear that the state's existing infrastructure drive is to be a key element in its employment creation plans.

The ambitious infrastructure programme has failed to transpire at the rate initially hoped for, or needed to seriously boost economic growth.

As recently as Wednesday, Group Five, one of the country’s largest private sector construction firms, complained at the release of its interim results that "infrastructure spend programme has not yet materialised".

Nevertheless, Zuma outlined the progress so far on some of the major strategic infrastructure projects outlined in his 2012 State Of The Nation address, which is being driven by the Presidential Infrastructure Coordinating Committee (PICC). These included the start of the Mokolo and Crocodile River Water Augmentation scheme, which will provide part of the water required for the Matimba and the Medupi power stations.

He also mentioned the state's improvement of the Durban-Free State-Gauteng logistics and industrial corridor.

Substantial work was now underway to develop the City Deep inland terminal in Gauteng he said, while initial work had commenced in the expansion of Pier 2 in the Durban Port. Finally land has been purchased for the development of a new dug-out port at the Old Durban airport to progress the project.

Zuma also mentioned the work to improve the transportation of iron-ore on the west coast of the country.

“The first phase of the expansion – to increase iron ore port capacity at Saldanha to 60-million tonnes per annum – was officially completed in September last year,” he said.

The successful roll out of the first phase of the state’s renewable energy programme is a laudable milestone with R47-billion invested across 28 projects in wind, solar and small hydro technologies.

Zuma also noted that of R800-million set aside in a national green fund, over R400-million in investments had been approved for green economy projects by municipalities, other organs of state, community organisations and the private sector.

The president stressed the need to “coordinate, integrate and focus on implementation” of the infrastructure programme, saying the PICC would fast-track the projects.

As the country marks the centenary of the 1913 Land Act, which deposed black people off their land, Zuma admitted that the government’s medium-term review last year revealed a number of shortcomings in the land reform implementation programme.

Zuma said to address these problems, government will shorten the time it takes to finalise a claim. “In this regard, government will now pursue the "just and equitable" principle for compensation, as set out in the Constitution, instead of the "willing buyer, willing seller" principle, which forces the state to pay more for land than the actual value.

Parliament is expected to establish the office of the land valuer general, which will decide the “just and equitable” prices of land. This establishment of this office was proposed in the land reform green paper and was approved by the Cabinet in November last year.

While acknowledging that the land question was a “highly emotive matter”, Zuma added that “we need to resolve it amicably within the framework of the Constitution and the law”.

He also affirmed an ANC resolution, taken at the Mangaung conference, that the Restitution of Land Rights Act of 1994 be amended in order to provide for the re-opening of the lodgement of restitution claims by people who missed the December 31 1998 deadline.

Also to be explored are exceptions to the June 1913 cut-off date to accommodate claims by the descendants of the Khoi and San, as well as heritage sites and historical landmarks, said Zuma.

He said the government planned to provide better incentives for commercial farmers that are willing and capable of mentoring smallholder farmers.

Zuma reaffirmed the decision of last week’s ANC lekgotla that education be made an essential service.

He added that all successful societies had invested in education.

Zuma announced plans to establish a presidential remuneration commission, which will investigate the appropriateness of the remuneration and conditions of service provided by the state to all its employees.

Teachers will be prioritised in this initiative, he added, as decent salaries and conditions of service will play an important role in attracting, motivating and retaining skilled teachers.

The government will no longer tolerate violent protests, and “will spare no effort” in ensuring that those who break the law during strikes or protests will be prosecuted and their cases will be prioritised, Zuma said.

To this effect, Zuma announced that he has instructed the justice and security cluster to make sure that any incidents of violent protest are acted upon, investigated and prosecuted.

Courts will be allocated to deal with such cases on a prioritised roll.

"The law must be enforced and it must be seen to be enforced – fairly, effectively and expeditiously."

He said lessons had been learnt from Marikana and other incidents that could not be allowed to recur.

“We therefore call on our people to exercise their rights to protest in a peaceful and orderly manner.

“It is unacceptable when people’s rights are violated by perpetrators of violent actions, such as actions that lead to injury and death of persons, damage to property and the destruction of valuable public infrastructure."