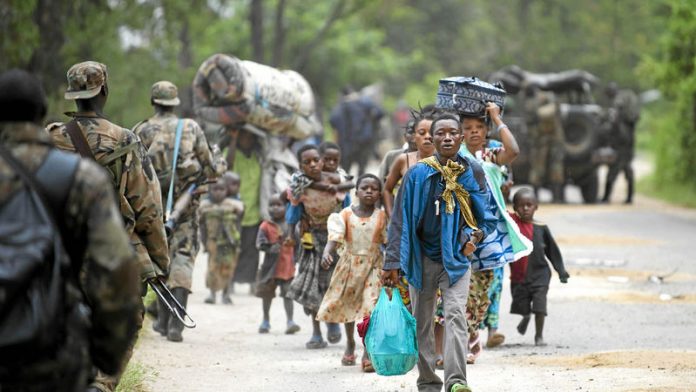 The exodus happened between February 7 and 13, according to Willy Isekusu, local district commissioner for DRC's North Ubangi province, despite Seleka signing a peace accord with the government last month.

"According to several sources, we now have more than 11 000 Central African refugees in several parts of North Ubangi", added Simplice Kpandji, a spokesperson for the United Nations' refugee agency in Kinshasa.

A large number of the refugees are children, many of them unaccompanied, according to the UN Office for the Coordination of Humanitarian Affairs (OCHA).

UN agencies began an evaluation mission on Thursday, mainly to consider setting up a humanitarian site and establish a crossing place for the refugees. Many of those who have fled are being hosted by Congolese families.

Refugees started crossing the Oubangui river, which forms part of the 800km border, on February 7 to flee shooting blamed on the Seleka coalition, which last Friday acknowledged that there had been an incident but said it was over.

On Wednesday, Isekusu said the exodus was still going on because of unidentified assailants who were looting and carrying out atrocities.

Forces of the Seleka – which means "alliance" – took up arms against President Francois Bozize's regime in mid-December and came within striking distance of the capital Bangui in the unstable and impoverished country.

Leaders in the central African region helped to bring about peace talks, which led to an accord in Gabon's capital Libreville on January 11. Under that agreement, Seleka members were granted posts in a national unity government. – AFP