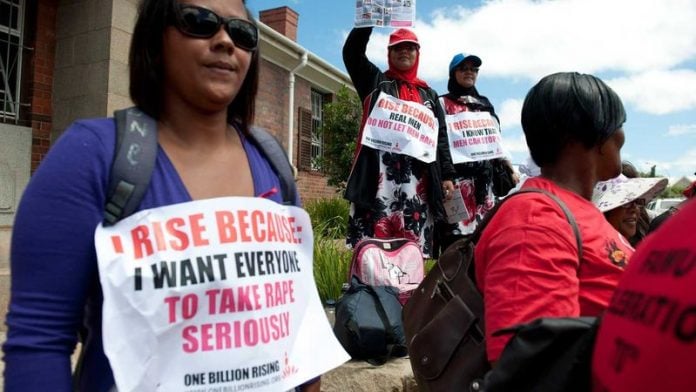 We all know the truth of it: a brutal rape and murder left 17-year-old Anene Booysen’s body mutilated, her intestines spilled on to the dirt next to her in a ­Bredasdorp construction site. This rape will, if the statistics have their way, play out much like many of the 65 083 rapes reported between December 2007 and June 2011 – a number we also know is far lower than the actual ­number of rapes perpetrated in South Africa during that time.

Perhaps the attention given to this case will result in better policing, ­perhaps in better prosecution. But one thing we know for sure: going by the ­conviction rates, there is a mere one-in-10 chance that the men accused of the rape and murder of Booysen will be convicted.

We also know that, although Booysen’s attack was particularly heinous, in the past few weeks we have read about six children, aged 10 to 16, who are on trial for the rape and murder of three other minors, aged 9, 10 and 11. We have read about a man who was convicted of raping his 13-year-old daughter over a period of eight years. We have also read about a young woman who was found dead, believed to have been raped and strangled, and then hidden under the suspected killer’s bed for three days.

These cases appeared in the media – and disappeared as quickly as the ink dried or the radio voices cracked or the TV images dissolved. Activists were quoted: we need funding, we need government support, we need the politicians to act, we need patriarchy to end, we need the people to kick and scream and demand action … and the details of the rapes were painstakingly revealed so we could feel the appropriate degree of disgust and sorrow and paralysis. In some of the cases, signs were held up, candles were lit and, most certainly in every case, devastation was wrought on the victims and their families.

It was Booysen’s case, though, that managed to raise condemnation from the highest office in the nation, with the president decrying the act as ­“shocking, cruel and inhumane” and demanding that the courts impose the “harshest sentences” for sexual crimes. But, even with this battle cry, there isn’t much hope that things will change. Nobody representing the national government managed to make it to Booysen’s funeral.

There is something else we know: the statistics have been screaming at us for years and we have kept silent. In a 2009 Medical Research Council study, it was found that, of the 1738 men interviewed, 27.6% admitted to raping a woman or girl. Of those, 46.3% said they had raped more than one. A year later, Gender Links told us that 37.4% of men in their 2010 study admitted they had raped a woman, and 25.2% of women said they had been raped by a husband, boyfriend, family member or acquaintance.

We must ensure that beyond the outrage of the moment we secure the deep, structural change required across both society and the justice system to bring an end to the horror that shames all South Africans.

Backlogs, booze, testicular cancer — all factors blamed for the apparent ineptitude or unwillingness to tackle a pandemic that is silently killing women all over the country.
Read more
Africa

The conflation of human rights violations and a pandemic leave the most vulnerable marginalised. Equitable and democratic societies are needed to fight against this
Read more
Advertising
Continue to the category
Politics