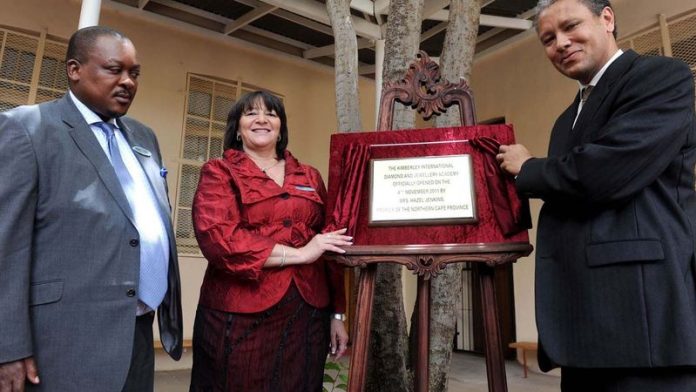 On a frosty mid-July evening last year, thieves entered the tightly secured Kimberley Diamond Centre, eased their way through the maze of padlocked doors and alarm systems, opened a safe and made off with uncut diamonds worth R6.7-million. The Mail & Guardian understands that were no signs of forced entry and the safe was not damaged.

But this is no Hollywood blockbuster about a diamond heist from the early diamond fields. It is the story about how the controversial Northern Cape finance minister, John Block, and his department of economic development and tourism bought the uncut diamonds for a state-operated diamond beneficiation scheme without a ­diamond-buying licence – and seemed unfazed when the diamonds were stolen.

Although the department reported the theft to the police, in public it tried to bury the matter by misleading the provincial legislature and not launching its own investigation.

The saga raises questions about the capacity of the state, and particularly weak provincial governments, to intervene in the minerals sector.

The diamonds were destined for a government-led diamond polishing and cutting school, the Kimberley International Diamond and Jewellery Academy (Kidja), set up by Block's department in partnership with De Beers, which provides bursaries for the students at the school.

An M&G investigation has uncovered five red flags that raise questions about the state's role in the deal:

o The department was not licensed to buy uncut diamonds for Kidja, and claims it used a private company's diamond-buying licence for this purpose.

o Skills and technology at Kidja were to be provided by an Armenian company, which has since left South Africa. Although the department still maintains the Armenians will play a role at the school, documents show their main interest was in buying diamonds from the Northern Cape with Block as a middleman.

o The theft of the diamonds appears to have been an inside job but the department has refused to take responsibility for it and is not conducting an internal investigation. Paradoxically, it is the complainant in a police investigation of the theft.

o Block told the Northern Cape legislature last year that he knew nothing about stolen diamonds. He also misled members about which company was running the school.

The department ignored a question about why he did this.

The Northern Cape police confirmed that Block's department bought the diamonds from a prominent Kimberley diamond trader, Dean Snyders, who died, apparently of a heart attack, in January last year.

Uncut diamonds
The department claimed that the stones were stolen from a safe inside Snyders's business offices at the Kimberley Diamond Centre. The department rents an office in the same building.

However, a former business associate of Snyders, who asked to remain anonymous, said the safe was only accessible to the late diamond trader by fingerprint recognition – and Snyders had been dead for seven months when the theft happened. This raises questions over the veracity of official reports. The businessperson also alleged that Snyders would never have sold diamonds to the department or stored them for the government, because he had fallen out with Block.

Senior department officials discovered the theft during a routine inspection and alerted the police, according to a police statement. No arrests have been made.

The department hired a Polokwane-based company, Zurel Brothers, to run Kidja and train the students. It also claimed to have used Zurel's licence to buy the diamonds that were stolen.

But Zurel Brothers flatly denied giving the department permission to use its licence. The Diamonds Second Amendment Act of 2005 is clear: noone may buy uncut diamonds without a licence or permit.

The M&G's attempts to clear the official fog surrounding the diamonds were also frustrated by the South African Diamonds and Precious Metals Regulator, which monitors the compliance of the sale, purchase, possession and export of South African stones with domestic and international laws.

An official at the regulator in Kimberley confirmed that it would monitor diamonds bought with public money for Kidja but refused to elaborate. "All our clients' information is strictly confidential," the official said.

Unique processes
Block's department was also silent about its responsibilities for monitoring the diamonds its buys for Kidja. "These [the stolen diamonds] were the only diamonds bought and therefore [there was] no monitoring," Malane Barlow, the head of communications, said.

Asked when the tender for the diamonds was advertised, how many bidders responded, why Snyders was selected and whether the diamonds were procured in line with the Public Finance Management Act, Barlow said: "The buying of diamonds follows its own unique processes."

Asked whether any department officials had access to the safe, she said: "We do not know of any official involved in the loss. No internal investigation is being conducted because they [the diamonds] were not lost or stolen in the department's custody."

Answering a written question in the legislature by Pakes Dikgetsi of the Congress of the People several weeks after the theft, Block made the extraordinary claim that "there is no knowledge of any stolen diamonds".

The department has consistently denied responsibility for the theft. Confronted with allegations that senior lieutenants in Block's department had direct access to the safe, Barlow said: "We do not know the circumstances surrounding the theft of the diamonds at the Kimberley Diamond and Jewellery Centre."

In his 2011-2012 budget speech, Block told the legislature that R25-million in European Union donor funding had been allocated for the school and the eventual establishment of a diamond and jewellery hub.

But the province's diamond strategy was dealt a blow with the announcement that the State Diamond Trader (SDT) would not relocate to Kimberley, as earlier promised.

The SDT's mandate is to buy 10% of all diamonds mined in the country and sell them to historically disadvantaged diamond cutters and polishers to boost local beneficiation. In theory, this would have provided a steady stream of stones for local beneficiation. It is understood the move was halted because of the Sol Plaatje municipality's infrastructure constraints.

Relevant dealing and buying licences
To mitigate this, former premier Hazel Jenkins announced a deal involving the province, the Armenian government and the private sector in April 2010, under which the Armenians would provide the cutting and polishing expertise for Kidja. In turn, the province would help the Armenians secure diamond supplies worth more than $5-million for the school and their own business.

But the M&G has established that the Armenian delegation consisted of three private diamond dealers from a multinational company, Firestone Diamonds, and an Armenian MP with private diamond interests. Firestone, which has offices in India, Belgium, the United States and Armenia, registered a South African subsidiary called FS Diamonds in 2010.

Block told the legislature last year that FS Diamonds was the chosen supplier for Kidja and that the company had the relevant dealing and buying licences needed for the school.

But FS Diamonds closed shop and retrenched its staff in January last year, seven months before Block's answer in the provincial legislature.

A former staffer with intimate knowledge of the company said that FS Diamonds had lost "millions" in a failed attempt to set up a cutting and polishing factory in Gauteng and that its managers had returned to India and Israel. He knew nothing of the Northern Cape venture. Firestone Diamonds did not respond to questions.

A source at De Beers, who knows about the Kidja project but asked not be named, also denied any knowledge of Armenian involvement in the school.

Conceding
Shortly after their arrival in the province, Block presented the four "Armenians" to leading diamond miners in Kimberley. The M&G interviewed one of the miners, who said: "I quickly realised this was a political meeting. John [Block] was talking about the ANC's long history with Armenia; the Armenians said nothing. We weren't given an opportunity to talk to them individually. To this day, I don't know what that meeting was for."

The provincial government maintains the Armenians will still provide skills and technology at the school in time. But the department concedes that they have not visited the Northern Cape in two years.

In a letter to the Armenian MP, Gagik Abrahamyan, in mid-2011, leaked to the media, Block said several diamond dealers had rejected his proposal that they supply the Armenians with diamonds.

One prominent diamond house in Kimberley told Block's department that it was "difficult to operate outside the [existing] tender procedures".

In a further bizarre twist, Block outlined progress made in securing a supplier of "chicken feed" on the Armenians' behalf, to be shipped to Saudi Arabia.

His department insists this is part of the deal: the Northern Cape government will help the Saudis to secure chicken feed worth R520-million and ship it from Durban to Jeddah.

It is understood that the department is still negotiating with suppliers.

Coincidentally, "chicken feed" has a different meaning for one prominent Kimberley diamond buyer. "That's the term we use when we buy diamonds under the table – you know, the illegal stuff," he said.

For small-scale diggers in the North West, red tape is making it harder to mine the elusive gem
Read more
National

Some in the ANC say John Block is being protected for factional reasons, while those close to Pule Mabe say his image is being purposely tarnished.
Read more
Advertising
Continue to the category
Politics