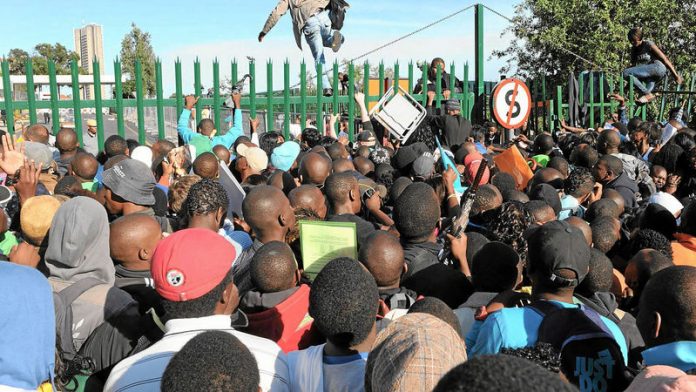 A central feature of the Freedom Charter of 1955 was that: "The doors of learning and culture shall be opened — higher education and technical training shall be opened to all by means of state allowances and scholarships awarded on the basis of merit." Implementing this laudable goal has, however, been much more complex and challenging than the authors ever imagined.

Last year at the University of Johannesburg, Gloria Sekwena, the mother of a student hoping to apply for admission, was trampled to death in a stampede of 7 000 applicants. Trying to explain the disaster, vice-chancellor Ihron Rensburg referred to the Freedom Charter in justifying the institution's well-intended access policy of allowing "walk-ins".

This year, with no walk-ins, metro police cars patrolled the gates of the campus to prevent another queue and stampede. The doors of learning might be open, but they are heavily guarded.

Was the cause of the 2012 tragedy simply a supply-and-demand problem, as the vice-chancellor implied? Unfortunately, the root cause is much more complex.

First, the reason that many students had not applied in time could have been that, based on their school exam results in September, they had not expected to qualify for university admission, but the final national exam "inflation" in the overall pass rate suddenly put them in the university market.

Second, the old "school guidance" component of the former curriculum focused on assisting students to apply for university admission, but the new life-skills programme appears to be more about life and less about skills.

Third, it could be argued that the chaotic arrival of prospective candidates at the university gates has to do with mixed and confusing signals about admission requirements and the availability of learning opportunities.

This, in turn, is the result of structural confusion in a post-school system in transition.

Opening doors?
To begin with, what does "opening the doors of learning" in higher education currently look like in the bigger picture? In 2012 there were 647 000 grade 12 candidates, of whom 511 000 sat the final examination and 377 000 passed.

A major point of confusion among prospective students, their parents and even the media arises in trying to figure out who of the successful matric candidates are eligible to apply for which higher education qualifications in which types of institutions.

First, it must be highlighted that, unlike in most other countries where "higher education" refers broadly to post-school education and includes a variety of institutional types, in South Africa higher education refers specifically to some kind of university — a traditional university, a comprehensive university or a university of technology. This is owed to the mergers then education minister Kader Asmal initiated from 2002.

As such, there is still no clearly defined post-secondary school-level college sector. Additionally, the private university and college sector is still small and restricted, and has unclear selection criteria beyond the ability to pay.

Unclear requirements
Because universities, comprehensive universities and universities of technology can — and in many cases do — offer all three of these qualification types, this means that, legally, all students who attain a national senior certificate qualify at minimum to attend a university.

However, whether applicants are actually accepted or not is ultimately determined by individual universities, where often the requirements are not clearly stated — and especially not the level of achievement.

Let's go back to the numbers for a minute. In 2012, 377 000 students achieved the minimum requirements, meaning that potentially 73% of those who wrote the grade 12 examination qualified for some form of university education. But how many of these pupils will actually get a place in a university in 2013?

According to a senior university planner, based on the figures for the previous four years and the combined institutional enrolment planning numbers for 2013, only about 128 000 of matriculants will qualify. And this number only includes students from schools in 2012, not the almost 100 000 who will enter from the workforce, the ranks of the unemployed and other avenues.

Furthermore, although the number who obtained a national senior certificate at minimum qualification level increased by 40 000 from 334 000 in 2009 to 377 000 in 2012, the number absorbed into the university system only increased by about 10 000. So, in the end, only 34% of the pupils who obtained a minimum qualification in 2012 will enter the doors of higher education.

Mistaken impressions
What this also means is that 249 000 young people are under the mistaken impression that they could potentially enter a much-desired university. This desire is not unfounded: in countries of great inequality, the returns from obtaining a higher education qualification are disproportionately high. In South Africa, it has been estimated that, in financial terms, a new graduate will earn five times more than a matriculant. And, in the context of more than 50% youth unemployment, the probability of a graduate finding a job is five times higher.

However, the reality is that 250 000 young matriculants did not make it into a university in 2013 and are, instead, in a frenzy in the higher education marketplace. This is an appalling waste of talent and a shocking return on investment by both families and the state.

Meanwhile, misinformation and contradictions abound. The education politicians and bureaucrats were very quick to claim credit for improved outputs — referring to the 73.9% of those who passed the grade 12 examination last year and achieved a (legal) university entrance. What they don't tell you is that only about 20% of those students were actually educationally eligible.

Journalists deepen the misunderstanding by blaming the students for not applying in time. A Sunday Independent article on January 13 was a recent case in point. Its opening statement was that "there is no happy news to tell the thousands of students who were turned away from universities this week after failing to register in time". Never mind the confusion of the terms "applying" and "registering".

The point is the universities were not going to take all those students anyway — in part because there is simply no space for them all, but more importantly because many individual universities regard the majority of these applicants as educationally underprepared for university studies.

Deceptions and confusions
The print media's deception is developed by the television media, which, every year, finds an African "superstar" from a township who, like the one displayed on e.tv this year, achieved more than 95% for mathematics and physics. In interviews, all these superstars attribute their success to hard work, goal directedness and some support from a teacher.

When one this year was asked what he aimed to study, he replied without hesitation: "Actuarial science at the University of Cape Town." Such aspirations are quite appropriate for the highest-scoring pupil and he has ­certainly set his sights on an appropriate institution and profession for his profile.

In fact, it must be said that, at this top end of the market, the signals are very clear and are ­probably quite comparable to international practices.

However, the same cannot be said for the rest of the system: confusion about entry requirements and expectations sets in with the comprehensive universities, gets worse with universities of technology and becomes utterly opaque in the further education and training "post-school" sector.

The term "post-school education" refers to an institutional notion of learning and not to an academic ladder. In South Africa, post-school simply means "you are out of school". Educationally, it is generally understood to refer to the almost 50% of all children who drop out of school between grades one and 12, plus the ones who achieved an national senior certificate — an incomparable mixture of students and education skill levels.

Second, in terms of the official qualification ladder, the public perception is not that further education and training is a clear vocational stream, but rather that it is a repeat of matric.

This is because only the upper-level courses — technically, N4 to N6 on the National Qualifications Framework — at further education and training colleges, that account for 45% of college enrolments, are post-matric ones. So why repeat matric when you already have a minimum university entrance?

A ministerial spokesperson was quoted in the same edition of the Sunday Independent as saying that post-school education must be seen as more than getting a matric and going to university. This is absolutely correct.

Ambitions
Bringing the further education and training sector into the national higher education sector started under then-minister Naledi Pandor. To his credit, Higher Education and Training Minister Blade Nzimande has made this a priority, to the extent that his ministry projects in the 2012 green paper an enrolment of four million pupils in the post-school sector by 2030 — up from 400 000 in 2010.

Even if hopelessly over-ambitious, this is the first post-1994 government policy that directly addresses the "inverted pyramid" of the South African education system — one in which far more attend university than mid-level skills institutions such as colleges.

But another urgent priority is to clarify this fog of post-school ­education and, particularly, the qualification levels and meanings of the further education and training college sector, for students, life skills teachers, the market and the media.