The El Bulli of Yeoville 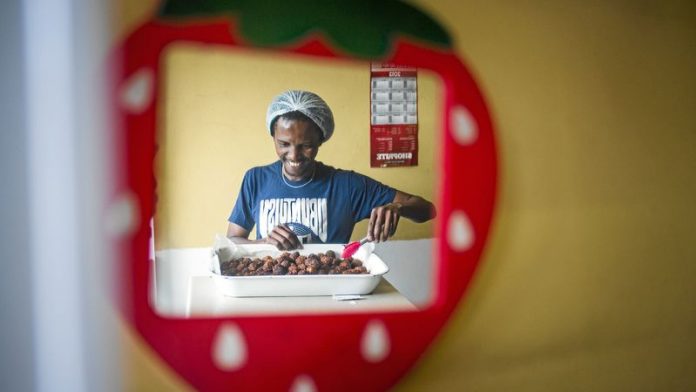 Yeoville at night resembles a superheroes’ convention. Congolese and Zimbabwean men by the name of Orpheus, De Gaulle, Commander, and Mister Banks (“No first name,” that one told me, “just ‘Mister’ ”) take to the streets in outrageously pointy, white patent leather loafers, red suede pants with tassels, and full suits of luscious green silk. They all agree, though, that Sanza Sandile is the king of the Yeoville superheroes.

Sandile, an elfin South African chef, who owns 80 pairs of flamboyantly coloured socks, has a unique power in this diverse neighbourhood: the power of fusion. He operates a wildly exuberant pan-African “cookshop” out of a sliver of a storefront no bigger than a single-car garage, tucked between the Happy Day and Night Supermarket and a reggae bar.

“Yeoville is a boiling pot of cultures,” Mister Banks said. “With his cooking, Sanza brings all of us together.”

On a recent Friday evening, we found Sandile in the reggae bar, working the dance floor in a green apron to attract new customers to his year-old cookshop, called Sanza’s Good Food. I say “cookshop” because there are no tables, only an open kitchen Sandile built himself, a two-metre counter and a bench on the sidewalk where you can sit and eat.

Sandile does most of his business after hours, serving late-night classics such as samoosas and curries to tired Yeoville clubbers. But his signature — his passion — is to playfully fold elements of other African cuisines into traditional South African dishes. His Durban-style chicken curry might be spiked with Congolese cassava; his beef stew served with a tart relish of egusi (spiced Nigerian gourd seeds); his lentils prepared in the style of matapa (a Mozambican dish usually made with seafood).

“I’m not a specialist of any cuisine,” he said, leading me to his cramped kitchen from the reggae bar. His persona is half-mad French baker, half Rastafarian. He wears his apron everywhere and can vamp for minutes on the distinctive properties of different flours, but his chef’s toque is a crocheted Rasta cap and from his kitchen’s open door he continually shouts to passers-by with the Jamaican greeting, “Fyah!”

“My food is pure fun.” He recently taught himself how to make “couscous” with mealie meal, both a cross-cultural and a molecular-gastronomic triumph. “Braaipap is more Xhosa. Couscous is Moroccan. But I have a skill: just a little water, turmeric, a clove of garlic and butter. I’ve got a long chopstick. I keep stirring it. I put the water low and the mealie grains start popping and popping! In the end, it’s fluffy and yellow and buttery. People think it’s couscous!”

He considers himself a gastronomic smuggler, moving people across national borders with dishes that slyly partake of elsewhere. He calls Sanza’s Good Food “The El Bulli of Yeoville”. “Or who’s that guy, Heston Blumenthal, with the Fat Duck? If he came here, I would die!”

Mixing spices and cultures
Born in Swaziland, Sandile, now 39, arrived in Soweto as a toddler in 1976. One of his grannies, from the Eastern Cape, taught him the soul of Xhosa food; the other was a domestic and brought intriguing Western dishes such as cottage pie home on weekends.

Although fascinated by food, he thought of cooking as a woman’s world until, as a teenager, he ventured into the male-dominated mine hostels to socialise. “I discovered men who cook. I would see men making their own pap.”

He moved to Yeoville 20 years ago; in the intervening time, “Africa came here”, he said. He fell in love with the sauces he tasted in the Cameroonian fish cafés and Nigerian bars-cum-carwashes that started sprouting up all over the neighbourhood. Unfailingly gregarious, he started asking his new neighbours to teach him the essences of their cuisines.

He loves it when a Congolese patron tries a Cameroonian sauce or a Zimbabwean tries a spice-blasted Nigerian relish. “Food is a spanner between cultures,” he said.

Now open seven nights a week until 2am, Sandile aspires to make his cookshop 24-hour. “My dream is for it to be always open. Like a temple!”

His other mission is to introduce South Africans to pan-African food.

On Saturday mornings, you can find him at the Braamfontein Neighbourgoods market manning a booth he calls Mystic Yeoville African Vegetarian, next to a purveyor of fine pheasant terrines. Sandile’s offerings are unabashedly bastardised, mixed up, playful and joyful. There are fruit-cake raisins in his red-cabbage salad. A so-called tzatziki is made not with yogurt but inkomazi.

Getting people out of their comfort zones
On the Saturday morning after I met him in Yeoville, he was offering every passerby a spoonful out of a vat of lentils, which he described as “a bastard ghetto North African thing”. The sauce was a deep purple-green-black, the colour of a glistening oil slick. It contained eggplant and pulverised cassava leaves. At one point, he hooked one member of a slightly startled-looking group of varsity girls in bangles and booty shorts who were making a beeline for the pheasant terrines and convinced them to try the lentils. When they praised the dish and bought full portions, he clapped his hands gleefully and exclaimed: “We’re getting naughty!”

Slightly obscured by the vivid conceptualisations with which Sanza surrounds his food is the simple fact that it just tastes good. His lentils are rich and earthy, with a Provençal flavour afforded by the eggplant; his “tzatziki,” more liquid than normal because of the inkomazi, was a beautifully light counterpoint; his cabbage salad was bright with fresh lime juice. And it’s relatively cheap: a plate loaded with four or five dishes costs R60; if you buy from the cookshop in Yeoville, you get a small enamel cup of beetroot or hibiscus smoothie thrown in.

For Sandile, though, the concepts are the exciting part. “Food is a tool, man,” he said. His aim is to draw people out of their ethnic-food comfort zones into a gustatory recognition of the greater world they’re a part of.

“For me, Africa is a country. African food is usually about strong tradition. But I’m not traditional. You’ll find me at the crossroads.”