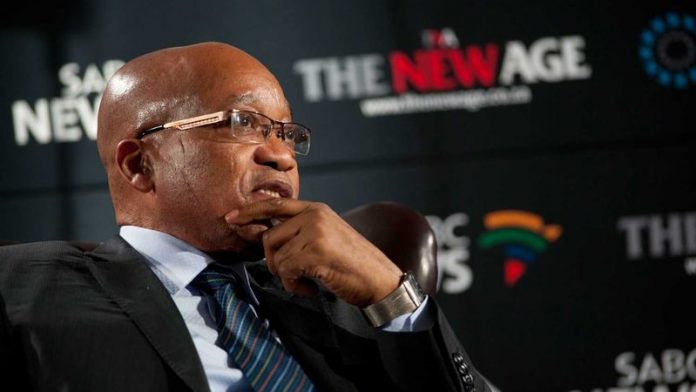 Addressing the New Age media breakfast Zuma on Friday reiterated government's call that violent protests immediately cease unless they be met with the full might of the law.

Zuma spoke at length about the subject, saying these images were creating the impression overseas that "South Africa was on fire".

"It's wrong to think you have to be violent to make yourself heard. It's to think that just because you have a problem you can destroy property," Zuma said in Cape Town following his State of the Nation address on Thursday.

He vowed that there would be specialised courts to deal with the violent protests. State action against nationwide protests formed a major part of the president's Thursday address. During his speech Zuma said all instances of violent protest action will be "acted upon, investigated and prosecuted".

In accordance with this, the president has instructed law enforcement agencies to ensure law and order is maintained during service delivery protests and industrial action.

"When people from around the world see these pictures of violent protest, they think South Africa is burning, when it is really not," Zuma said on Friday.

Dealing 'with people who break the law'
Analysts have contrasted his plan to deal with violent protests with his equally harsh pronouncement on violence against women and children, where he fell short of pronouncing special measures to counteract this violence. He attacked the notion that many communities felt they could only attract response from government if they acted violently.

"It's wrong, they have a right to protest peacefully, but other people also have a right not to protest and not to have their homes burnt. From now on we are no longer going to tolerate it. We must take the lead and deal with people who break the law."

Zuma said the problem with crime in South Africa is that it is too violent compared with other nations, but attributed it to apartheid and how it had brutalised its citizens and taught them violence.

Elaborating on his speech, Zuma said its content was determined by the country's current challenges and difficulties.

National issues
For the first time the president spoke out on the controversial breakfast hosted by the New Age newspaper. The SABC has been criticised for giving free airtime to the New Age and parastatals have been blamed for spending a great deal of money on the paper, whose circulation is unaudited.

"I want to join those who say how good this practice is, the country has been given an opportunity to listen and [participle on national issues]. It is the SABC's duty to broadcast to the country what is happening. I will not comment about the paper because people might say I am biased but it is the only newspaper that pays attention to provinces and makes them feel that they are part of national discourse."

The president's comments come in the wake of a spate of violent strikes and service delivery protests.

In August last year 34 workers in Marikana were gunned down by police during a labour dispute at Lonmin platinum mine.

It sparked a wave of unprotected industrial action in the mining sector, which was eventually brought under control in October.

'Iron fist'
In January, Zamdela informal settlement was the centre of violent confrontations between police and residents who were protesting against the amalgamation of Metsimaholo Municipality in Sasolburg with the Ngwathe Municipality near Parys.

It resulted in the destruction of millions of rands worth of property and the death of at several protestors.

Zuma's utterances also follow a directive from the ruling ANC that violent protests would be met with an "iron fist", announced fortnight ago.

"When people protest nowadays, they trash houses, burn tyres and block roads. It's wrong – we can't do that," Zuma added on Friday.

"As South Africans we have a responsibility to respect the rights of others as we exercise our own rights."