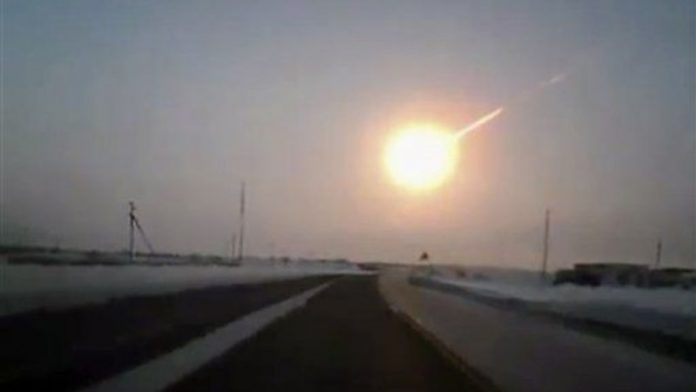 The 10-tonne space rock streaked over the Chelyabinsk region in central Russia in a blinding fireball on Friday just as the world was braced for a close encounter with a large asteroid.

With air temperatures at around minus 17 degrees Celsius, Russian divers spent Saturday scouring a frozen lake believed to be the impact site, but the emergency ministry has now decided to focus on repair works in the region instead.

"Divers worked there, but we didn't find anything," said spokesperson Vyacheslav Ladonkin.

He said the ministry considered that a circular eight-metre hole in the frozen lake Chebarkul, about 60km from the city of Chelyabinsk, was not caused by any extraterrestrial body.

"We believe it was caused by something else," he said. "A decision has been made to stop the search. It will not be continued today."

Forty people remained in hospital on Sunday, mostly with cuts, broken bones and concussion, a doctor told Rossiya Channel from the Chelyabinsk hospital said, while a special centre was opened to provide psychological help to those disturbed by the incident.

"There was a white streak. We thought it was a burning plane," Vera, a patient who was brought to the hospital unconscious, told Rossiya as she recounted Friday's drama.

"Then there was a blast. And then I don't remember," she said from her hospital bed, apparently still dazed.

Emergency workers continued replacing smashed window panes during the weekend, after nearly 5 000 buildings were damaged by the sonic boom caused by what scientists said was a 10-tonne meteor.

The strike is the most stunning cosmic incident above Russia since the 1908 Tunguska Event, in which a colossal blast most scientists blame on an asteroid or a comet levelled trees across a stretch of Siberia.

Scientists Nasa estimated that the amount of energy released in the atmosphere on Friday was about 30 times greater than the force of the nuclear bomb dropped on the Japanese city of Hiroshima during World War II.

The drama in Russia developed just hours before an asteroid — a space object similar to a tiny planet orbiting the sun — whizzed safely past Earth at the unprecedented distance of 27 000km. – AFP

The journey into the heart of redness

The Anthropocene equation measures the impact of humans