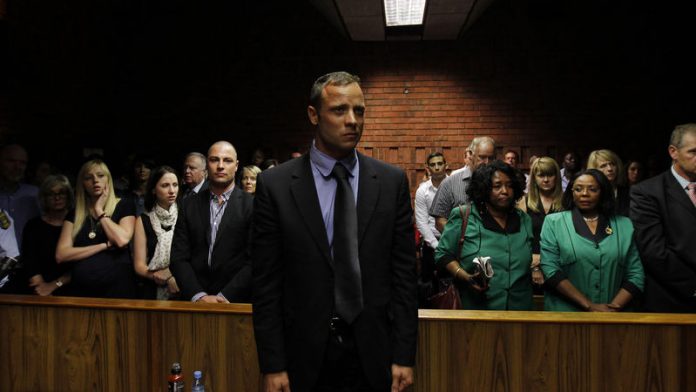 Pistorius stands charged of the murder of his 29-year-old girlfriend Reeva Steenkamp. Pretoria magistrate Desmond Nair has ruled Pistorius will be prosecuted for a schedule six offence, limiting the possibility of him getting bail.

Pistorius had been teary the whole morning, but when the affidavit, marked "Exhibit A" was produced during his bail application, he began sobbing, his body shaking.

His brother Carl held his back and placed his hand over his head, passing him an energy drink as Roux read that Steenkamp had given Pistorius a Valentine's Day present and he "couldn't have been happier".

Pistorius started off stating pertinently that he had been made aware that he stood accused of murder, but denied the allegation, saying that "nothing can be further from the truth that I planned the murder of my girlfriend. "

Events
Roux then described the alleged events of February 13.

"Reeva would have gone out with her friends, me with mine. She wanted to stay at home. I was watching TV. My legs were off. She was doing yoga. At the end of the evening we got into bed."

"I'm acutely aware of people gaining entries to homes to commit crime, I've received death threats. I sleep with my 9mm under my bed. I woke up to close the sliding door and heard a noise in the bathroom."

Pistorius, a double amputee who runs on carbon fibre blades, said he had mobility on stumps, and could walk on them.

I was scared and didn't switch on the light. I got my gun and moved towards the bathroom. I screamed at the intruder."

Because I did not have my legs on I felt vulnerable. I fired shots through the bathroom door and told Reeva to call police. I walked back to the bed and realised Reeva was not in bed. It then it dawned on me it could be her in there."

'She died in my arms'
​He said he tried to open the bathroom door, but it was locked, and went to the balcony to scream for help. He put "on" his legs, and broke the door open with a cricket bat, got a key and opened it.

I … called paramedics and complex security, I tried to carry her downstairs for help. I tried to help her but she died in my arms. After the shooting I did not flee the scene. I remained until the police arrived."

Roux finished by stating that Pistorius said that he does not know of any witnesses in the matter and would not interfere with any witnesses.

Pistorius confirmed that the affidavit's details were correct. – Additional reporting by Sapa