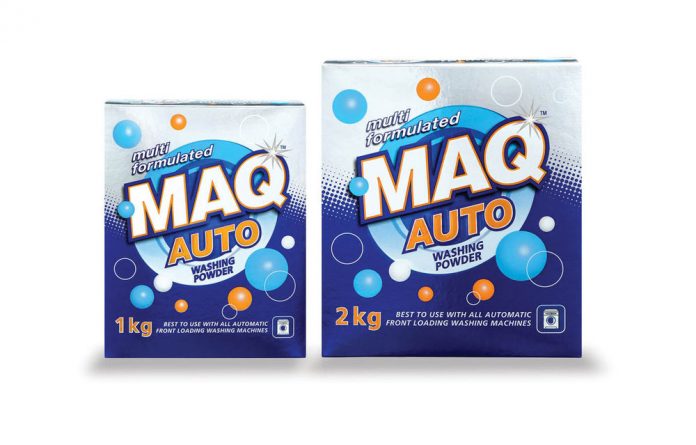 Would the story of David and Goliath have been any less captivating if the underdog had received a little help from a friendly source? Maybe a step-ladder to reduce Goliath’s height advantage or an infusion of a mystical potion to give David special strength?

Ignoring the religious essence of the account — because obviously David’s faith is the secret element that gave him the upper hand – the story has inspired many a small guy to take on giants and win.

Bliss Chemicals is a modern-day equivalent of this popular tale, with its ally helping it to take on multinational giants such as Unilever, Proctor & Gamble and Colgate.

This ally is the IDC’s chemicals and allied industries business unit, which has been instrumental in Bliss’s successful entry into the competitive detergent market, of which it already holds as much as a 20% share.

The company is the manufacturer of the MAQ brand of high-foam washing powder and low-foam auto washing powder, and has recently introduced a raft of new products as it looks to build on its success.

“Bliss has recently launched a new range of detergents, bar soaps and liquids to compete in this sector of the market that is valued at R1,5-billion and growing at around 12% annually,” says Hilton Lazarus, head of the IDC’s chemicals and allied industries unit.

“This segment has remained untapped by Bliss, however, because the company has historically focused on washing powder.” This broadening of its product range and market reach has resulted in Bliss introducing Reef 2-1 washing powder, MAQ dishwashing liquid, Jus Soft fabric softeners, Securex bath soaps and MAQ washing soap.

It is expected that these additions will initially make up 19% of sales and play an important role in improving its competitive position.

The company is seen as a strategic investment in building South Africa’s industrial base, particularly in sectors dominated by multinational brands.

Production plant expansion
The importance of the investment can be measured in the R350-million the IDC has recently extended to the manufacturer, but equally in the more than 900 jobs that have been created by the expansion of the business.

The IDC has financed the business since inception, most recently in 2008 when Bliss identified the need to expand its product range and manufacturing capacity to achieve the scale it needed to compete effectively in a market dominated by a handful of competitors.

To this end, the IDC approved facilities for a large production plant expansion valued at R200-million.

This expansion and relocation to new premises in the industrial complex of Wadeville, Germiston, are also crucial to growing Bliss’s market share outside South Africa. Its export markets currently comprise Angola, Botswana, Swaziland, Lesotho and Namibia.

Attractive investment
For these and other reasons, the business ticks all the right boxes as far as the IDC’s requirements and mandate are concerned.

“Bliss is an intensive manufacturing operation and is expected to become a major player in the soap and detergent market and grow substantially due to its quality and keen pricing,” says Lazarus.

“Growing the value chain by converting raw materials in South Africa is in line with our business unit’s mandate, as well as with government’s industrial policy action plan.”

The strong job creation potential, the economic merit of the business and its contribution to sustainable economic development all pay a part in presenting a strong case to the IDC. The second round of funding is expected to create an additional 915 jobs over the next three years.

The company’s empowerment credentials are another attractive trait, which is essential in any project hoping to attract IDC funding.

Long-term development
​The state lender’s willingness to support projects that have these long-term development characteristics has also stood Bliss in good stead as an additional R150-million has been extended to the company in working capital.

This was needed when the construction of its new facility in Wadeville suffered delays due to technical, rezoning and council approval difficulties.

“Costs have also escalated due to additions and extensions to the building to cater for larger warehousing space and land preparation costs. The finance provided by IDC was insufficient to complete the building and Bliss funded it from internal resources,” says Lazarus.

Without the helping hand from the IDC, Bliss Chemicals probably would not have been able to expand at the rate it has, says Lazarus.

“The preferential terms provided by the IDC have certainly given the business an advantage and some breathing space, particularly in broadening its product base to compete more effectively in the market.”