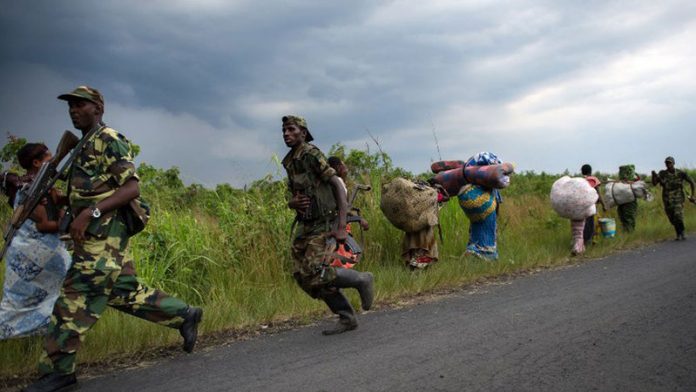 African leaders failed to sign the deal last month after a disagreement over who would command a new regional force that will be deployed in east Democratic Republic of Congo (DRC) and take on armed groups operating in the region.

The DRC's army is fighting the M23 rebels, who have hived off a fiefdom in east Congo's North Kivu province in a conflict has dragged the country's eastern region back into war and displaced an estimated half a million people.

Rwanda and Uganda had been accused by UN experts of supporting the rebels, an accusation they denied.

"It is my hope that the framework will lead to an era of peace and stability for the peoples of the Democratic Republic of Congo and the region," Ban said.

Congo's government and the rebels are holding talks in Uganda aimed reaching an agreement on a range of economic, political and security issues dividing the two sides, including amnesty for "war and insurgency acts", the release of political prisoners and reparation of damages due to the war.

"We … commit ourselves to respect our obligations of this agreement we signed today, and we wish that all the signatories do the same," DRC President Joseph Kabila said.

The rebels, who launched their offensive after accusing Kabila of reneging on the terms of a March 2009 peace agreement, have broadened their goals to include the removal of Kabila and "liberation" of the entire DRC.

Common understanding
President Jacob Zuma said on Sunday while the deal did not provide all the answers to the problems in the region, it was an instrument to help it find a way out of its morass.

"Its success will depend on the commitment and ultimately the concrete actions taken by all the parties to it, to interpret and implement it to its fullest noble intention," Zuma said at the signing.

Zuma welcomed the inclusion in the framework of benchmarks and follow-up mechanisms, and said this would facilitate a common understanding of the actions required by all parties.

He said the partnership needed to go beyond cooperation within the context of the envisaged regional oversight mechanism.

There had to be coherence in initiatives in the region, with the intention of supporting the DRC and its neighbours in a process which would lead to sustained peace and development. He welcomed a proposal to appoint a UN special envoy to this end.

"We hail the commitment of the international community to walk alongside the DRC and its neighbours on a path of peace, stability, nation-building, reconciliation, mutual understanding and trust, as well as socioeconomic development underpinned by political and human freedoms," said Zuma.

"A heavy burden of responsibility falls on the government of the DRC and its neighbours. Theirs is the historic task of freeing the people of the DRC and the region from its tortuous history of conflict and instability, and to introduce a new future offering democracy, peace, stability, progress and prosperity."

Development problems
​Zuma said South Africa was committed to partnering with the DRC government and people as they responded to the problems of development.

"We will always be ready to work with them on important challenges such as reconciliation, post conflict reconstruction and development, covering such areas as security sector reform, institutional capacity building and economic development."

"South Africa further welcomes the proposal for an intervention brigade as a realistic option to bring security to the eastern DRC within the shortest time frame and hope that the signing of this framework will hasten the deployment of an appropriate peace enforcement mechanism," said Zuma.

"We are convinced that a military deployment presents only a short term solution, but that real stability, peace and development requires far-reaching actions from the government of the DRC and its neighbours."

He said only a comprehensive political solution would form the basis of lasting peace in the eastern DRC, and that all armed groups should, therefore, immediately cease all forms of violence and other destabilising activities, release child soldiers, and permanently lay down their arms. – Reuters, Sapa