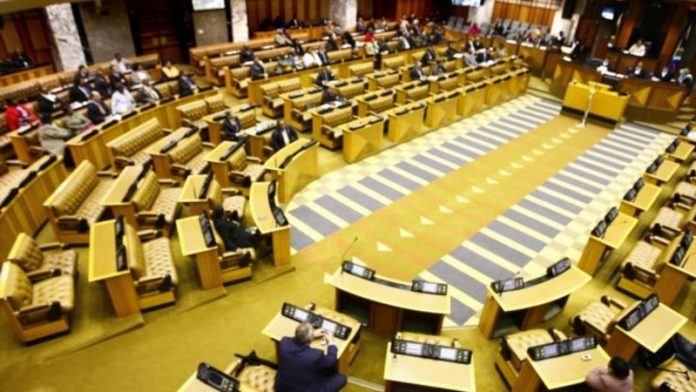 Parliament held a special debate on Tuesday on "the growing rate of gender-based violence in our society" but a number of ministers, including those whose departments work with abused women and children, were absent from the House.

Democratic Alliance (DA) MPs criticised the ministers' absence with its deputy justice spokesperson Debbie Schafer saying that it was symptomatic of a lack of leadership on the issue.

Another DA MP Mike Waters rhetorically asked: "Where is the minister of social development in this debate? I know where she is – she is in Potchefstroom attending a council meeting.

"Where is the minister of women and children? She is probably out buying more furniture with the tax payers' money."

The ANC took over the control of the Tlokwe municipality from the DA earlier in the day when it passed a vote of no confidence in the DA's Annette Combrink, who was elected mayor by the council, after a similar no-confidence vote on the ANC's Maphetle Maphetle in November. Maphetle has been reinstated as mayor.

Xingwana reportedly spent more than R2-million on office furniture and the DA has asked the auditor general to investigate this expenditure.

Absentees
The ANC was not concerned about the minister's absence from the debate.

Spokesperson for ANC caucus Moloto Mothapo told the Mail & Guardian that the discretion on who participates in debates "doesn't normally … follow government titles".

Mothapo said this was not a debate on a portfolio like a budget vote, but a political debate.

"You look at the cluster and select appropriate speakers who can speak on a wide range and overarching issues," he said.

Xingwana's spokesperson Cornelius Monama said the minister had addressed a press briefing in Pretoria at 1pm and was probably delayed somewhere.

Motshekga speaks out
Minister of Basic Education Angie Motshekga, who is also the president of the ANC Women's League, compared the abuse of women to slavery.

"By the look of things, a woman's life seems far cheaper than a black life in the days of slavery. Gender as an ideology, in patriarchal societies, normalises cruelty against women," she said.

Motshekga said it cannot be right that women, who are in the majority at 51.7%, continue to be wantonly abused, defiled, raped and murdered as if they are subhuman.

Motshekga said the barbaric mutilation and defiling of the body of Anene Booysen in Bredasdorp, followed by the killing of Reeva Steenkamp, showed why the women's league wanted to see accelerated mechanisms for the protection and respect of women's lives.

"In certain circumstances, and with no disregard for the laws we've made together, it should be possible to deny bail to those charged with heinous crimes against women.

"We need a radical message for other villains. We're not saying necessarily that we must resuscitate the archaic role of punishment as a public spectacle as we have it in French philosopher Michel Foucault's text, Discipline and Punish.

"But you tell me, what do we say when the disembowelled body of Anene brings to mind gory images of Shakespeare's Lavinia, from the most violent and bloodiest of his tragedies, Titus Andronicus?"