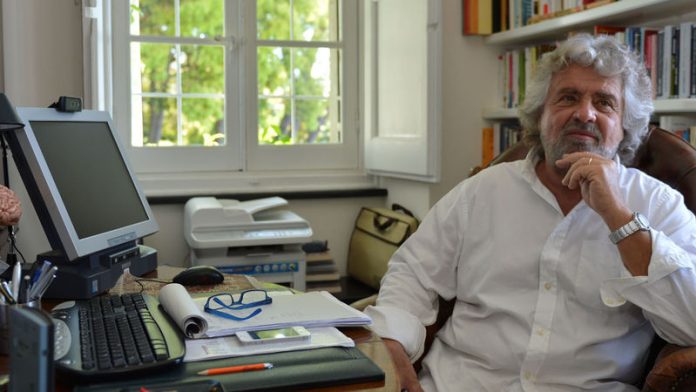 "The mainstream parties are finished! They won't survive for long", announced Grillo, in typical style, on his Five Star Movement's (Movimento 5 Stelle) online television channel late on Monday night. For a long time political scientists have predicted that the internet would lead to the decline of formal political parties – and Beppe Grillo is showing how.

Nine months ago, the comedian-blogger was polling at 5% nationally. At the beginning of the week he took over 25% of the vote: a rise practically unprecedented in modern European politics. It has taken a lot of people by surprise, including the pollsters.

What accounts for this meteoric rise? Two weeks ago, Demos released a report based on a survey of almost 2 000 Facebook fans of Grillo and his movement. The answer is a fascinating and powerful mix of anti-establishment rhetoric, new technology and old-fashioned rallies as well as local action. Head on the internet and feet on the ground, as Grillo puts it.

His message is a simple one – that Italy's politics is corrupt, elitist and closed – and it is striking a chord. His supporters come from across the spectrum; they are neither clearly left nor right.

They are all, however, angry about the state of democracy in Italy and Europe. Our survey showed only 2% trust parliament and only 11% trust the press.

Grillo has, by an enormous margin, the largest social media following of any politician in Europe: he has more than one million Facebook friends, and a similar number of Twitter followers – Pier Luigi Bersani has about a quarter of that as does David Cameron. Grillo's blog is the most widely read in Italy.

Crucially, he uses this to make things happen offline, encouraging his virtual supporters to meet and discuss the issues he raises on his blog in real world "meet-up groups" – and there are hundreds of them. Feeling part of something, his supporters are motivated, while 51% of Italians said they would "never" participate in a boycott, only 9% of Grillo's supporters say the same.

According to my estimates, he has around a quarter of a million supporters who consider themselves members of the movement: an army of volunteers and door-knockers that would previously have taken years to recruit.

The medium and the message fit hand in glove: the media is a racket, so circumvent it. Politics is closed – especially the party list system – so elect members online.

That is why his election rallies have been by far the most well attended of all the candidates, and why the pollsters didn't see him coming. His voters turned out more consistently than anyone else. The same thing happened in Germany with the Pirate Party in the recent Berlin election, where pollsters dramatically underestimated their support. Polling companies have some work to do.

Social media campaigning
This election was a litmus test on whether social media campaigning and support can translate into actual votes. The result is a resounding yes. The melange of virtual and real-world political activity is the way millions of people relate to politics in the 21st century.

Formal membership of political parties is plummeting, while social media following – Facebook groups or Twitter followers – is growing fast. Grillo has shown how to use them.

Other parties will try to replicate his success. In some ways, they will struggle. I can't see Ed Miliband holding a "fuck off" day aimed at the establishment, or Nick Clegg calling David Cameron a "psycho dwarf" any time soon.

But the appetite for anti-establishment parties is growing.

Grillo's message has resonated in a country where faith in government, parliament and the media is low and falling. Social media politics as pioneered by Grillo – citizen-led, brazen, open, democratic – is what happens when politicians appear too distant, too elite, too different from the people they represent. The established parties need to take note. – Guardian News and Media 2013

“The province’s member of the executive council for transport Weziwe Tikana-Gxothiwe is suing a United Front activist for Facebook posts he made that she says paint her as corrupt.”
Read more
Africa

The Films and Publications Amendment Act aims to protect citizens, but new technology requires that the regulations and guidelines are updated
Read more
World

The second blast sent an enormous orange fireball into the sky, immediately followed by a tornado-like shockwave that flattened the port and shattered windows across the city
Read more
Advertising
Continue to the category
Politics